Is Prose Edgier in a Colder Climate? 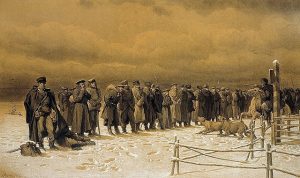 March to Siberia by Artur Grottger, 1867

When it comes to themes of the Spiritual, God, Good and Evil, Suffering, Redemption, Doomed Love Affairs, Psychology, and Existential Questions of the Soul, I’m convinced most literary critics would agree that the greatest writers of the 19th/early-20th century came from Russia. (Profoundly dynamic works of German fiction and non-fiction around the same era will be the subject of another essay.)

I’m thinking of such great storytelling giants like Leo Tolstoy (War and Peace), Fyodor Dostoevsky (Crime and Punishment), Anton Chekhov (The Seagull), and Aleksandr Solzhenitsyn (The Gulag Archipelago). There are many more fine writers on a par with these greats but the above examples stand out as being world-renowned for their amazing classics.

These scribes of Old Mother Russia, who all believed in God, seem to justifiably (not gratuitously) do misery and soul-searching far superior to Western writers during those Russian Golden and Silver eras of yesteryear.

But what was it that made their work edgier than their Western counterparts? Perhaps it was the outside forces that imposed themselves on the ‘Great Bear’ or, regarding Solzhenitsyn, the terrible cruelty that Communism brought inspired this great thinker who plunged deep into the depth of the human soul. Or maybe it was the harsh climate, with long freezing winters, that stirred the imagination of these marvellous intellects. This climate hypothesis is one key factor worth considering.

I can’t imagine the same profound material on existential soul-searching could ever be produced in the tropics. Crime and Punishment or War and Peace coming from an island in the sun? Not a chance. Neither could I imagine Solzhenitsyn’s Gulag Archipelago being written on a paradise beach, where grass-skirted beauties hula-dance in the warm ocean breeze to the tune of Hawaiian guitar. Such a climate is no literary inspirational match for a gaggle of old babushkas wrapped in sackcloth shawls, shivering in the snow at the gates of a gulag while visiting their sons or husbands who justifiably badmouthed Stalin.

In general, isn’t it paradoxical that the enormous volume of highly artistic works—from movies, drama, literature, poetry, paintings to music—is invariably bleak but give us immense joy? Think about it: does this fallen world with so much suffering justify moments of joy through the transient pleasures of the arts, despite their dark themes?

After all, one can’t have Shakespeare’s work without tragedy, or W.B. Yeats without a ‘terrible beauty being born’. But back to those ‘dreary Russians’. If they were alive today and living in the West, it’s possible their work would not be published because of cancelation by the PC gatekeepers.

Consider Dostoevsky’s novel, Demons. This is the story about a revolutionary gang that attempts to wreak havoc on a Russian village with intent of destroying the traditional order. Dostoevsky’s deep insights is like that of a genius psychologist and philosopher in his observations of early Russian life, with incredible sharp perceptions way ahead of his time.

But do today’s Woke censors have the same demonic mentality as the gang in the above novel? Would they deem the traditional order as being a toxic patriarchy, not to mention ‘religious oppression’? And what if they found out Dostoevsky’s granny had a distant cousin living in the USA who was friends with a man investing in slave-trading? Would such a connection be a ‘cancel crime’ by association?

As for the prospect of any other great Russian (or Western) writers emerging in the future, their magnus opus manuscripts might remain locked away in filing cabinets while artists of all genres remain at the mercy of cancel-culture gatekeepers in both publishing and other media outlets.

Only recently, Penguin Random House aborted its plans to publish a collection of Norman Mailer’s political writings to mark the centennial of his birth next year. Now, Mailer’s writings wouldn’t come close in profundity to the great Russian scribes of yore, but banning him should be condemned.

According to Spiked magazine columnist Tim Black, “Seemingly this [the banning] is because a junior staffer objected to the title of ‘The White Negro’, his 1957 essay on hipster existentialism. This ought to chill the bones of anyone concerned about freedom today. Because if a figure as towering as Mailer can be cancelled, then no one, dead or alive, is safe.” (Spiked, Jan 10, 2022.)

Questioning whether or not Mailer’s essay should be republished, Theodore Dalrymple added: “If it were a question of its literary and intellectual value only, I should say no. On the other hand, it is part of the historical and intellectual record of its time, and the tendency to excise from the record whatever offends our present sensibilities has already gone far enough and should be resisted. Anyone interested in Mailer, either as a writer or (more important) as a cultural phenomenon, should have the essay readily available.” (Takimag, Jan 14, 2022)

The great Russian writers knew quite a lot about the threat of being banned. We in the West have up till recently lived through a similar era where many of our freedoms, especially freedom of expression, have been taken away. Only time will tell if another new wave of great Russian-type scribes test the water with truthful classics without fear of being cancelled or ostracised from Western publishers, if such a mentality still exists.

But back to the climate hypothesis as a possible subconscious trigger for producing deeper prose.  Ireland, for such a small island with little sunshine, has also produced some of the greatest writers beginning in the 18th century to the late-1960s. From the satirical Johnathan Swift to the surreal Flann O’Brien and sombre Patrick Kavanagh, Ireland’s scribes of yore are a force to be greatly admired.

It’s hard to imagine Waiting for Godot or Krapp’s Last Tape being set on the Polynesian sands of Waikiki, with the intrepid pair Vladimir and Estragon singing ‘Happy Talk’ under a coconut tree; or Krapp in a porch near a bright golden meadow singing ‘Oh, What a Beautiful Mornin’.’

And what about good literature in regions of sunnier climes? Surely that knocks the cold-climate hypothesis on the head? How did great writings and philosophy emanate from warm places like ancient Greece, Spain and Italy? Maybe the answer is a comparative one: Aside from philosophy and good literature, in my opinion the writers from these regions still wouldn’t surpass the power and profundity of the aforementioned Russian greats.

Finally, regarding poetry, the British Poet Laureate Andrew Motion (1952-) once admitted to using chemical stimulation to help him write poetry. He said a daily cup of the cold remedy, Lemsip, helped him because it gave him a sensation of having a “mild illness.”

“It works,” he told BBC News. “I’ve been doing it for years and it’s become habitual. Years and years ago, I read in a biography of AE Housman that he wrote most of A Shropshire Lad while he had a cold.” (BBC News, Oct 15, 2002.) With this in mind, are we about to see an avalanche of new classics post-Covid? Or will poor prose now be blamed on climate change?