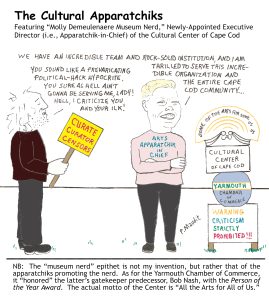 When the local chambers of commerce and their connected arts curators define art (and literature), then art inevitably becomes safe for the business community and generally innocuous.  Art is in trouble when the business community praises gatekeeping curators, as in the case of directors Bob Nash and Lauren Wolk of the Cultural Center of Cape Cod, which boasted: “Earlier this year, Bob and Lauren were honored with the Person of the Year Award from the Yarmouth Chamber of Commerce to recognize their tireless commitment to our community.”  Yes, to the business community and tourism industry, they are indeed committed!

However, should art be safe—castrated!—to satisfy those in power positions, including those at the helm of the local chambers of commerce, politicians, curators, educators, and editors?  Sadly, on Cape Cod, where I dwell, it has become egregiously evident that any art critical of such persons is automatically excluded and forced into the realm of oblivion and, of course, in the name of inclusion.  To synopsize the situation, my situation, I wrote the following poem:

On the Curator Blacklist

Dare, how dare you

or rather how dare I,

and yet I do and will

with bona fides in hand,

proof of my rage against

the dying of the light,

—the marm in charge

at the helm of the Museum of Art,

of the Cape Cod Poetry Review,

the febrile editor of Provincetown Arts,

and the director of the Cultural Center

“Of All the Art for All of Us”

except my art, except your art,

The Cultural Center of Cape Cod sends out an email each week called “This Week’s Muse.”  Now and then, it inspires me, unintentionally of course, to create in a negative light, usually a satirical cartoon or poem like the above.  But this time its “Molly Demeulenaere Museum Nerd” missive, which I placed on The American Dissident website to prove that I did not make it up (see also the Center’s full press release), provoked me to write this critical essay.  The big news—good news!— is that Demeulenaere is replacing Bob Nash as Executive Director (i.e., Curator-in-Chief), whom I depicted in several cartoons as a flaming hypocrite.  Since silence is always the best response of such hypocrites when criticized, unsurprisingly, Nash did not respond.  Those at the helm of the Center are stuck in an Orwellian mindset, where inclusion is exclusion and all is some.  “All the Arts for All of Us” is the Center’s motto.  In the absence of criticism and critical art, those at the helm will continue to thrive comfortably in their Orwellian world.  And so, I sledgehammer.

“We are thrilled to go into 2022 stronger than ever and fully committed to our mission to serve the entire Cape Cod community and visitors to the area by offering instruction, entertainment, and exhibition in the visual, literary, and performing arts,” announces the missive in typical self-congratulatory form.  Lauren Wolk normally pens the missive, but since Wolk is retiring, a handful of art apparatchiks signed it, including her.  In the missive, Beatrice M. Gremlich, President of the Center’s Board of Trustees, is quoted:  “Change is always challenging.  But it can also be inspiring and invigorating.”  However, the greatest change would be the greatest challenge, the one the Center will simply not address:  restoring the true meaning of “inclusion”!  In essence, for the Center and its arts apparatchiks to cease being hypocritical, it and they would have to open up to hardcore criticism and INCLUDE art that incarnates such criticism.

“Working with Molly [Demeulenaere] over the past three years has proven to me and the board that she’ll make an excellent leader, preserving what’s best about the Cultural Center but paving the way for new growth as well,” argues Gremlich, sounding like a true politician.  Well, arts apparatchiks and politicians tend to be one and the same.  Art does NOT need more so-called “leaders”!  What it needs is more rude-truth telling artists willing to risk grants, fellowships, platforms, and academic positions by daring to criticize arts “leaders” handing out those carrots… that serve to control, co-opt, castrate, and corral!  Only then can art become truly independent from the local chambers of commerce and tourist industry.  But sadly, Demeulenaere simply partakes in the leadership chorus and backslaps: “We have an incredible team and rock-solid institution, and I am thrilled to serve this incredible organization and the entire Cape Cod Community.”  But I am part of that Community, and she will certainly not be serving those like me.

The signatories, unsurprisingly, emphasize their hypocrisy and declare their adherence to wokeism:  “The Center will continue to embody its motto—All the Arts for All of Us—and will expand access to those who need us most as well as push for greater equity amongst our artists and performers.”  Equity means equal outcomes and, in that sense, unequal opportunities.  Where, one might wonder, is the equity for underrepresented artist truth-tellers?

Apart from the announcement of the new Executive Director, the missive pleads for more donations:  “Please consider making a gift to the Cultural Center so we can continue to bring you the programming you know and love … and surprise you with the unexpected.”  Sadly, “the unexpected,” at least for me, will be quite unsurprisingly expected:  a continuation of the unwritten policy excluding anybody and any art daring to criticize the apparatchiks at the helm!  Such art is automatically rejected, ignored, and/or ostracized by the arts establishment.  Think of the Nazi establishment in the late 1930s and its designation of art it scorned as entartete Kunst (depraved art)!  Well, at least it was open about it.

The signatories of the missive conclude that “Demeulenaere welcomes the opportunity to chat with patrons, artists, educators, and anyone else interested in more information about the Cultural Center, her plans for the future, and how to get involved.  She can be reached at [email protected].”  And so I sent this essay and email below directly to her.

Below is a direct challenge for you.  The attached cartoon forms part of that challenge.  Think about the tremendous conflict that inevitably exists between being a staunch individual and being part of a group and the consequent pressure to groupthink and group-behave.  My bona fides are also attached.  You might also wish to consult The American Dissident website for a list of other organizations I’ve challenged over the years.  I am wide open to discussion.  Are you?

Finally, I challenge Demeulenaere to open the hermetically-sealed doors of the Cultural Center of Cape Cod to permit an exhibition—my exhibition—of art aquarelles, cartoons, and poems critical of local pillars of the community, including Demeulenaere herself.  Will she surprise and actually stand up for freedom of expression… or will she not surprise and remain seated as a “leader” for the business, uh, arts community?  Well, unsurprisingly, in line with her predecessor Bob Nash (and Lauren Wolk), she did not respond and thus did not address any of the points made in this essay.  Perhaps she sincerely believes that I am an angry, dangerous man, like the local Sturgis Library director, who permanently banned me w/o warning or due process (see theamericandissident.org/orgs/sturgis_library.html).  Yet I am not really angry at all.  However, I am perhaps dangerous because I do openly criticize the arts machine, its apparatchiks and their tight connection to the business (money) community…

PrevIs Prose Edgier in a Colder Climate?
Pain in The UkraineNext