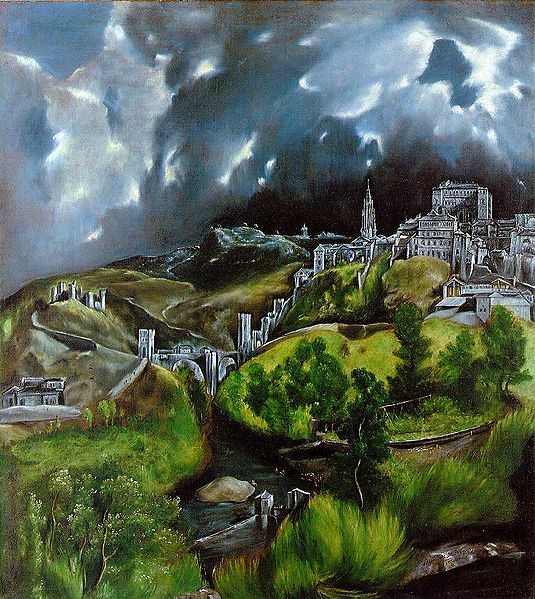 xcept for its maid service, the Palace Hotel lived up to its top-shelf reputation; the concierges were especially fine: congenial, quick, amply informed. How to get to La Casa del Abuelo (“Grandfather’s House”). “Of course, the gambas al ajillo are the best in Madrid. Really.” Ten-minute walk up Geronimus Avenue to La Victoria Street. Those small shrimp cooked in garlic and oil and served sizzling in the ceramic pot were the best I’ve ever eaten. How about El Botín, according to the Guinness Book the oldest restaurant in the world? Ah, a taxi (reasonable rates; all prices were reasonable). The hyperbole, including its memorable pork dish, was not a hype. (In civvies, an American sailor and his family were at the next table: lovely people.)

El Museo Nacional Thyssen-Bornemisza (Holbein the Younger, Rodin, Hopper, Lichtenstein, Van Gogh’s Les Vessenots en Auvers, Dali) is jewel-like, small and resplendent and right across the street. It began as the Baron Thyssen-Bornemisza’s private collection but was finally made available because of the influence of the baron’s beautiful wife, Carmen Cervera, who insisted on public display, and is much more inviting than the Museo Nacional del Prado.

The Prado is within easy walking-distance of the Palace and is now much enlarged, exhibiting El Bosco (Bosch), Durer, Bruegel, Goya, Goya, Goya, Goya . . . This visit was the low point. We had booked a tour, mostly to gain easy entry by bypassing long lines, but the guide was the joker in this deck—a crypto-communist who pretended to much knowledge but knew not whereof she spoke. “Ah, like all churches, that one is closed because no one goes”; an hour later, we were among two hundred people inside. “Oh no. The Moors left no legacy in Andalucía [not even the Alhambra?]; it was they who took away Spanish influences. Believe me, I’m a historian.” Her commentary—Goya of course being a communist avant la lettre—was always tendentious.

Everything else provided welcome surprises, small and large. Atocha, the grand, complex, modern, and in places quite beautiful main Madrid railway station (think Union Station in Washington, D.C., or Grand Central Terminal in New York), is a marvel of outdoor beauty indoors and of perplexing signage, which doesn’t matter because people are ready to help. La Calle de Las Letras (“The Street of Letters,” that is, of literature) is moving. There in bronze letters impressed into main and side streets, not far from where Lope de Vega (and others) worked and lived, are quotations from the masters. The Plaza Mayor is no great shakes. In truth, other plazas, both bigger and smaller than the Plaza Mayor, are more interesting: busier, more varied, livelier later.

Two excursions were exceptional, though in very different ways. The first was a rail trip to Alcala de Henares, the birthplace of Cervantes. It was a long walk from the station to his house, a reproduction on the original site. The first half of the walk was as dreary as the weather had been for the whole visit. (The sun was out when we were in.) Then we turned and the cityscape flipped: lively, lit up.

In front of the home are statues of Quijote and Sancho seated on a bench, the knight holding a lance in one hand, his other arm extended as though in puzzlement. Sancho sits a meter to his right, plump and pouting. And there, all over them, were schoolchildren, clumping, climbing, clowning, laughing. The teacher instructed them to dismount so we could take our pictures. I now have the knight flirting with Alexandra. The house itself offered various editions in many languages of the great work (and others), but the real attraction were the exquisite pen-and-ink illustrations by Dalí, the most evocative I’ve ever seen.

The second excursion was a half-day trip (forty-five minutes by bus) to Toledo: medieval, craggy, narrow, and filled with artisans of all kinds, especially leather, steel, and porcelain. The old city sits high above the Tagus River and its gorge with a low waterfall, a wonder to behold, but not as wonderful as is the city once you’ve crossed the bridge and look back. The one synagogue (there are eleven Jewish families in the old city, high up) was a church and a mosque and, though now a synagogue, is not used for worship. Here the guide was superb: well-paced, informative without being intrusive, responsive to questions. She offered an older version of Spain, still very Spanish. If I were to live in Spain (and could not live in the Alhambra!) it would be in Toledo.

Compared to Paris or Amsterdam or Rome, Madrid has remarkably few black people or any in Muslim garb; in fact, almost none of the former. Any guesses for reasons would be wild. The unemployed go to Germany or England for work, not France or Holland. El País (“The Country”) claims to be El Periódico Global (“The Global Newspaper”), and so it seems, with items on Mecca, the U.S. (two, in fact), the Oxfam scandal, Peru, and foreign cultural events in the same issue (February 14th), all deeply-reported. Of course, this is in contrast to Hola!, a sort of Life-People combo that covers international celebrities, the otherwise rich and chic, and (yes) aristocracy, including royalty at home and abroad: it is massively read (as a guilty pleasure for many). And, happily, Spain’s Millennials are not ours.

“Nothing changes here”: that from our last driver on the way to Barajas airport. But he’s been in Spain only ten years. In fact, much had changed before he arrived. I’ve made some dozen visits to Spain, many during the Franco regime and a few during the interregnum separating his death in 1975 from Spanish entry into the European Union in 1986—but, until this one, none thereafter. Madrid was vital during the eleven years of its free-floating cultural re-invention, a period is known as la movida. The population emerged from its collective somnambulence.

With entrance into the EU came a muted self-consciousness, like that of a semi-feral rescue pet who has found a home and looks around not quite believing (but wanting to believe) that it belongs. Now the Spanish may as well be saying, We are Spanish but not only Spanish, and many of us are less Spanish than others: less Catholic (of course), less culturally informed (familiarity with Spanish literary masterpieces are no longer required of all students), less interested in Identity—but more devoted to unity since March 11, 2004 (known simply as 11-M), when jihadists devastatingly attacked Atocha. (An engraved marble plaque high on a wall bordering Geronimus Avenue commemorates the event by thanking the people of Madrid.) At that moment Spain gained membership into a different community, one which (among other features) has taken away all patience with any separatist movements.

In his strong speech last Christmas against the Catalán separatists, King Felipe VI said, “The road cannot lead again to confrontation and exclusion, which as we already know generate nothing but discord, uncertainty and discouragement.” (This is the son of King Juan Carlos, who put his life on the line forty years earlier when confronted by a threatened coup—a father, by the way, who has counseled his son to talk less.) Those Catalans understood the finality of the statement, especially from a monarch who had already labeled their movement, “unacceptable disloyalty.” The speech was called contundente (full, rich, impactful). The separatist leader, subject to life imprisonment, has found refuge in Brussels. In Madrid, black-clad national police armed with automatic weapons are semi-ubiquitous, especially near state buildings.

So now the Spanish certainly belong, and if they remain divided (for example, some still revering the forty-year dead caudillo, others hating him lividly) the division is manageable. The semi-wantonness of the interregnum is gone, however, and the coming-of-age optimism that accompanied entry into the EU has settled. Spaniards are happy to know that the rising rate of home sales and the price of jamón serrano (tastier than prosciutto) is a sign that, finally, the economy is reviving; but, still, they are chastened.

Not so chastened, however, that one cannot find world-class cabaret entertainment that only the Spanish can offer. Our very grand finale was spent at El Rincón de la Rodriguez, Rodriguez being Maria Rodriquez, a soprano of enormous presence (and haughtiness to spare) who sings from the repertoire of both opera and zarzuela (the romantic, as opposed to the baroque, version is a tradition of operetta—with speech, song, and dance—dating from the mid-nineteenth century). She was accompanied by a tenor from the national opera company (his Vesti La Giubba was soul-shaking) and a dance master from the national academy of dance: kinetic, passionately virile, precise. Each, whether alone or together, emptied the tank. At the end of the evening La Rodriguez brought us (Alexandra and I about to celebrate a wedding annivesary) on stage and the team sang Verdi’s Toast from La Traviata.