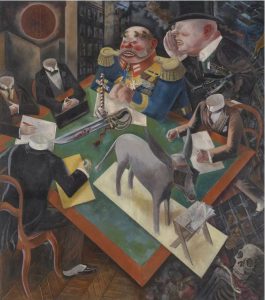 Is the Pulitzer Prize in journalism anything but an establishment credential?  Is it really proof of excellence?  Walter Duranty, a New York Times journalist, was awarded the prize for his fake reportage (i.e., pushing the narrative) on Stalin’s Holodomor—the nothing-to-see-here starvation of Ukrainians.  More recently, several journalists of the Times and Washington Post were awarded the Pulitzer for their fake Russiagate reporting.

Maureen Dowd, yet another Pulitzer-Prize winner, is an op-ed columnist for the New York Times.  Her column, “Donald Trump, American Monster,” grabbed my attention.  Why was Trump a monster? I wondered.  The Times wouldn’t let me read it without subscribing, something I’d never do because of its egregious ideological bias. So, I checked Google and found it on another site.

The prime problem with the column is Dowd’s predilection not for concrete facts, but rather for ad hominem and denigrating epithets, which tended to be the weapon of choice of ideologically-bound, hate-filled intellectuals, as opposed to rare objective journalists.  Sadly, Dowd mirrors the general m.o. of perhaps most journalists today, which explains why they tended to be held in such low-esteem by We, the Plebes. “Monster,” “vile mendacity,” “narcissistic psychopathy,” “Emperor of Chaos,” “bloviating buffoon,” “sleazeball in the Oval,” and “pure selfishness and wickedness” are some of the terms Dowd uses to describe the man who she viscerally hates. Hatred of course blinds people from thinking clearly.  Should a journalist like Dowd manifest such abject absence of objectivity? How can the Pulitzer judges award prizes to such journalists? Well, the answer is simple: ideological conformity! Would the Pulitzer judges accord a prize to a journalist, who factually criticized the January 6 hearings? Likely not! Why not? Ideological nonconformity!

“I’m reading Frankenstein by Mary Shelley for school, and the monster is magnificent,” notes Dowd in the beginning of her hate-Trump op-ed. How not to forget the sheer hatred for Bush? But the hatred for Trump has become Bush-hatred on steroids. Hatred tends to eliminate reason, logic and individuality, while fostering groupthink and self-censorship.

Dowd graduated from Immaculata High School and received a B.A. in English from the Catholic University of America. Well, religions certainly do have their haters. Pelosi, who declared herself to be a devout Catholic, is another example of such a hater. In effect, Pelosi seems to be playing the role of Pope in the January 6 holy inquisition!  Dowd recaps Shelly’s story, then quickly brings Trump into it:

Shelley’s monster, unlike ours, has self-awareness and a reason to wreak havoc. He knows how to feel guilty and when to leave the stage.  Our monster’s malignity stems from pure narcissistic psychopathy—and he refuses to leave the stage or cease his vile mendacity.

Dowd has a degree in English, not in psychiatry. She fails to be precise regarding her accusation of “malignity.” Moreover, has there ever been a president or other politician, who has not been a narcissist? Is Biden somehow not a narcissist? Clearly, the latter should have known he was not intellectually capable of running a country. Look at the damage he’s already done! But severe narcissism would have certainly prevented him from coming to that obvious conclusion.  In fact, it is preventing him from admitting any failures at all. hy is Dowd silent with that regard? Well, ideological conformity trumps journalistic objectivity!

Dowd fails to note an example or two of “vile mendacity.” No need!  She works for the New York Times. Perhaps the implicit example of such mendacity is Trump’s voter-fraud accusation. Yet many examples of such fraud actually exist (see www.heritage.org/voterfraud and 2000 Mules). Because former Trump Attorney General Bill Barr simply dismissed Dinesh D’Souza’s voter-fraud documentary does not somehow annul the data presented in it. A recent news story, which will likely be ignored by Barr and the January 6 hearings, adds to D’Souza’s credibility: “Hey, Bill Barr!… Kentucky Supreme Court Rules on Cellphone Geo-Tracking Case — Proving Premise Behind ‘2000 Mules’ Is VALID and Very Much in Use Today.” For an interesting (intelligent and reasoned) interview with D’Souza on his documentary, watch www.frontpagemag.com/fpm/2022/06/glazov-gang-dinesh-dsouza-2000-mules-glazov-gang/. It is truly shameful that many judges, journalists, and others have refused to carefully examine the complexity of voter fraud in the last presidential election. How can Dowd, as a Pulitzer-Prize winning journalist, simply dismiss such fraud with a simple denigrating epithet?

Again without providing an iota of evidence, Dowd argues: “It never for a moment crossed Donald Trump’s mind that an American president committing sedition would be a debilitating, corrosive thing for the country.” To question the election is NOT sedition! To encourage protesters to manifest peacefully, as Trump had done, is NOT sedition! But the accusation of sedition in Pelosi’s theatrical hearings, rather than “debilitating” and “corrosive,” has become strengthening and fortifying for the Democrat Party… or at least that’s what Dowd and Pelosi hope it will become. But the hearings, in the absence of cross-examination, counter-facts and counter-opinions, have themselves become “debilitating” and “corrosive” to democracy. Dowd argues, yet again without mentioning a single fact:

We listened Thursday night to the frightful catalogue of Trump’s deeds. They are so beyond the pale, so hard to fathom, that in some ways, it’s all still sinking in.

Moreover, many people did not watch the Democrat-Party primetime event. For the sake of accuracy, as opposed to that of party-line conformity, Dowd should not use the pronoun “we.” Dowd stipulates, “The hearing drove home the fact that Trump was deadly serious about overthrowing the government.” First, a “hearing” includes questioning and challenging by the opposition, which is why the term is a purposeful misnomer for something that is not fair and just. It should be termed a show trial, a witch hunt, an inquisition. Requesting recounts or voting-fraud investigations should never be denigrated, by bona fide journalists, as “overthrowing the government.”

Dowd states, “It was fine with him [i.e., Trump] if his followers broke the law and attacked the police and went to jail, while he praised their ‘love’ from afar. It’s amazing that no lawmakers were killed.” Well, the protestors did not have guns! Why did Dowd choose not to mention the murder of unarmed protester Ashley Babbitt by an armed guard, the only real “carnage” that occurred? Why was Babbitt’s husband not encouraged to speak at the hearings? Dowd concludes:

Everywhere you look, there’s something that makes your blood run cold. The monster in “Frankenstein” is not the only one who has forsaken “thoughts of honour.”

With that regard, she evokes Vladimir Putin, the school massacre in Uvalde, Texas, the “Greedy golf icons joined a tour underwritten by the Saudis,” “Kushner under investigation,” the Proud Boys monster, and the Fox News monster. Unfortunately, though unsurprisingly, Dowd fails to mention the Pelosi show-trial monster, the Deep-State monster, and of course the open-wide-and-swallow journalist-ideologue monsters. Evidently, Dowd seems to be a skillful projector … in the psychological sense. To paraphrase her last paragraph, one might conclude:

In her dystopian op-ed, Dowd did not promise to end “journalistic bias.” Instead, she delivered it. Now she needs to be held accountable for her pushing the left-wing narrative and not the truth and facts—and not just in the court of public opinion …