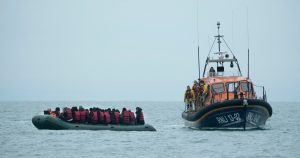 ‘What ish my nation?’ asks the Irishman Captain Macmorris in Henry V (3.3.63).  He is an Ulsterman, as his name makes clear, with a thick accent.  He is plying his traditional trade, explosives expert, charged with blowing up the walls of Harfleur.  He is left in deep grief when Harfleur surrenders, the peace process meaning a loss of gainful employment for his skills.  And he does not care for being taken in England for an Irishman, and in Ireland for an Englishman.

The current wave of cross-channel migrants would answer Macmorris’s question: ‘Yours, actually.’  Those migrants have destroyed all their documents which reveal their national identity and they are left with the identity they claim.  They cannot be sent back to patries that do not exist for official purposes.  Their country is Britain, which they have gate-crashed for good reasons.  With the United States, Britain is one of the two most attractive countries in the world.  The pull factor includes the world language, safety and health under benign laws, wealth which is freely distributed to asylum seekers, the welcoming diaspora of their people already in England, work which is easily obtained in the black economy, the inability to deport anyone, the knowledge that Britain is the end of the line.  Once they have their papers they will bring in their family.  Where they are, there they stay: ‘j’y suis, j’y reste’, they say, or would if they troubled to learn French.

The cross-channel migrants are now arriving on British shores at the rate of up to 1,000 a day.  The weather seems to be broadly tolerant, even in early winter.  Indeed, a few months back a trio of intrepid Abyssinians paddled across in a kayak.  Evidently, this surge can only be blocked by action on the French side, and this is not forthcoming.  The British TV public was lately treated to the spectacle of 40-odd migrants pushing out a large inflatable raft on a French beach, under the gaze of the police who did nothing.  The 40 travellers made it to the hospitable shores of Dover.  Sky News, which filmed the event, repeated it many times, always with no discernible reaction from the authorities on both sides of the Channel.  The obvious dangers of the Channel crossing have had no effect on the numbers: even when a boat was lost and 27 drowned, there was no slackening on the demand next day.  The asylum seekers regard death as an acceptable risk.

Margaret Thatcher, who once spoke of the danger of Britain being ‘swamped’ by asylum seekers, would have had severe words.  It passes belief that France, with all the resources of drones and the best organized police force in Europe—we might remember that France coined the word police, now adopted with spelling variations the world over—can do nothing to monitor and control its own beaches.  But Jean Castex, Prime Minister of France, insists that Britain ‘must make itself less attractive to migrants’.  This is effectively impossible.  Nothing will change its exceptional, unique attraction to the Third World.  Will the inhabitants of the Sahel accept that the one country of their dreams has closed its doors on them?  The feeblest of responses comes from M. Castex: ‘Only you can weaken the channels of irregular immigration by opening legal immigration channels to those who have legitimate reasons for wanting to come to your country.’  Of course they have.  Those with a desire to emigrate are a world without end.  So to the swarming and illegal asylum-seekers, who will always be with us, must be added anyone who can make up a legal case!   The idea, embraced by a senior Tory (David Davis) that safe legal routes are the solution repeats the fatuity of M. Castex.  The answer to illegality, then, is legality.  Sorted.

The question with which I began has already been answered by Poland and Hungary, two EU countries that agree to cover each other’s backs and cannot simply be outvoted in the EU counsels.  They do not want the wretched of the earth to inherit their nation.  They have no doubt of the threat to their own traditions, with large and ever-growing numbers who have no allegiance to Hungary and Poland, only to the dire economic pressures that have driven them from their homelands.   The attempt by President Lukashenko of Belarus to breach the Polish fences by flooding the border with migrants has failed, in part because of the assistance Britain offered with Army engineers.  No such assistance was forthcoming from other EU sources.

The nation state, in spite of the many attacks on it, is still holding its ground.  Nationalism has come in from the ice age of advanced thought, and is clearly set to enjoy a period of global warming.  The dismissive ‘national populism’, a term advanced by the liberal elite, is now fading.  ‘Populism’ turns out to be genuinely popular when allied to defence of the nation’s borders.  The evidence is visual, and endlessly repeated in the media; whatever the humanitarian case for admitting those who are not refugees but simply economic migrants, the general will is that this cannot go on.  Moreover, passport control now reinforces the general will.  Henley & Partners report that ‘restrictive policies initially introduced to control the spread of Covid 19 are now being conveniently applied to contain mobility from the global south.’

Le grand remplacement, which Jean Raspail foretold in Le Camp des Saints (1973), is now fully upon Europe.  It does not take the form of a single armada of boats from the Third World.  Instead, the metronomic regularity of migrant arrivals on Kent beaches accumulates to an armada of its own, whose direction of travel cannot be doubted.  Over 28,000 illegal migrants arrived in 2021, and those are of course the ones we know about.  Others include the temporary inhabitants of trucks, who by banging on the sides reveal that they are well into England and desire to make use of the excellent English reception facilities.  While the build-up of would-be migrants is a problem for France, their authorities reason that making trouble for England is a worthwhile solace.

If the armada was the first phase of Raspail’s vision, the second phase came in Michel Houellebecq’s Soumission (2015).  It was published on the same day as the Charlie Hebdo shootings, and was an immediate best-seller.  Houellebecq’s vision is of the 2022 Presidential election, in which France is taken over by an Islamist party under a charismatic leader.  The Establishment, like the electorate at large, cannot abide Le Pen’s party and goes for a softer Sharia-based state in which there are many rewards for the voters.  They include jobs—all university lecturers are guaranteed tenure if they convert to Islam—and polygamy on demand, which has many attractions for women and men.

It remains to be seen if Eric Zemmour can dent the Islamist appeal.  His hard-right message is ZERO IMMIGRATION, by which he means limiting the number of successful asylum seekers to ‘a handful’ every year.  He calls his new party ‘Reconquest’, a name that evokes the Reconquista period when Christian forces drove Muslim rulers from the Iberian peninsula.  2022 is shaping up as a titanic battle in France for the nation state, and it has huge implications for the other side of La Manche.

PrevTwo Poems
Revelation or the Uplifting of Emotions at SinaiNext