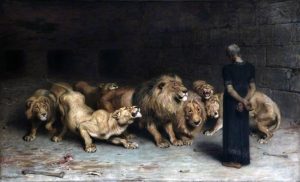 Daniel in the Lion’s Den by Briton Riviere, 1872

“As a lion swallowed its prey, a bone got stuck inside of its throat. So he said, ‘I shall give a reward to anyone who comes and removes it.’ An Egyptian heron, which has a long beak, came along, stuck his beak into the lion’s mouth, pulled out the bone, and demanded, ‘Give me my reward!’ The lion roared, ‘Off with you! Go boast, “I entered a lion’s mouth in peace and came out in peace.” There can be no greater reward for you than that.’”—The Book of Legends: Legends from the Talmud and Midrash, ed. H.N. Bialik and Y.H. Ravnitzky.[1]

Once, I went insane—unhinged, my friend.

Once, I lost it, and my soul retains the crease;

I remember heavens at an end.

I’m informed I can (if I intend)

See what only everyone can see.

Once, I was in love—oh yes, my friend.

Once, I was in love with Love’s insane caprice.

I remember Love, whose words defend

Chaos; Eros is her diplomat.

Love’s a loan that no one’s hand can lend.

I remember when mere Time could mend

Anything. Before I got so fat,

Given something ghastly to transcend,

Men may know the flush of being free.

Every indication of surprise

That so many of the songs they most esteemed

Issued not from fissures formed to gather Lore,

But, indeed, from this benignly wise

Transmitted, in the age of hard

Carols from a place so perfect, it

Universe of song achieves a fire-tree

Circumstance that, not unlike the silent roar,

Is quite nearly unachievable: