Not Even Wrong or Scrambled Eggs! 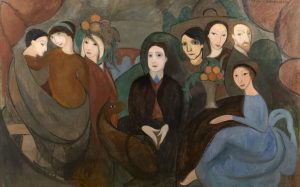 Apollinaire and his Friends, Marie Laurencin, 1909

New English Review describes itself as, “unaffiliated with any political party or religious denomination,” and, “dedicated to the return of the spirit of public debate.”  Assertions stated clearly on its website.

Find New English Review entry on Wikipedia and you will (sometimes) see it described as a far right literary magazine and journal. Scroll through the edits where this label has been removed and you will find the reason for reinsertion as reliably sourced; the sources being the Southern Poverty Law Center and someone by the name of Philip Dorling.

But what is a reliable source? Maybe it’s my old age but I understand it to be something subjected to, and to have withstood, critical analysis by those at the top of their research field—otherwise known as peer review. A respect for objectivity also helps. But does the SPLC value objectivity or having its opinions subjected to critical analysis? The views it puts forward are sometimes so riddled with problems one wonders where to begin. In this particular case it is not even wrong.[1]

To begin with, what is its definition of right wing? Is it a political leaning anywhere to the right of the SPLC? This would include Republicans, Conservatives, Libertarians, Classical Liberals, Liberals, Centrists, those left of centre (if not right of far left?), and anyone else it disagrees with.[2] Once this has been decided, who are the far right? Sharing a view on any particular point with anyone, or on anything, the SPLC finds distasteful seems to automatically assign one to the same camp—in the way all Brexit supporters were placed in the same camp, for voting the same way, as racists and fascists; or, likewise, protest voters were equivalent to neo-Nazis for voting for Donald Trump.

There are myriad reasons why people, including those with different political leanings, might agree on certain things. Does that mean they agree on everything? For example, if Mussolini believed scrambled eggs was the best breakfast ever and I believed the same thing, does my agreement with Mussolini, on this particular point, make me an Italian fascist? A trite comparison one might retort but this is exactly the kind of thinking behind some SPLC tarnishing and most other, if not all, woke de-platforming.

NER has been accused of hosting content sympathetic to the English Defence League. So which views do they share? The scrambled egg for breakfast view? One of the biggest contributors to the Brexit vote was the refusal of mainstream political parties to engage in debate over immigration. Those who struggled against this silencing were labelled racists. But more than one type of person likes scrambled eggs. Valid reasons for wanting to discuss immigration levels include: the strain on the UK’s finances; the housing crisis; and the difficulties posed for integration and the harmonious social fabric of a democratic, liberal society.

Worrying about a younger generation’s future in a country where living standards are declining and job opportunities look bleak are, surely, valid reasons for expressing concern about how much a country can afford and cope with high levels of immigration. Ah, these are not really my concerns some say, I must be a closet racist or have been led astray by racists. The latter accusation is rather patronising (maybe some of us can’t come to valid conclusions without the help of certain organizations). The former accusation is in the same vein as being called an Uncle Tom or a coconut. Those of other than white hue are traitors to their ‘race’ and all immigrants for daring to dissent. There will be no diversity of views here. Or maybe they are not non-white, as they appear to be, because, didn’t you know? David Webb has white privilege.[3]  And he probably likes scrambled eggs.

But David Webb is not alone. Thomas Sowell, Walter Williams, Jason Riley, Candace Owens, Kanye West and Katherine Birbalsingh have all benefitted from their white privilege too! Similarly, Ayaan Hirsi Ali, Yasmine Mohammed, Irshad Manji, Maajid Nawaz and Ibn Warraq, those anti-Islamic fascists, have benefitted from theirs. What do you mean they are, or grew up, Muslim? Ok, well, they’ve clearly been led astray by fascists and must be their tools. I bet they like scrambled eggs!

Germaine Greer and Camille Paglia? Oppressors! They’ve been instrumental in the feminist movement for women’s rights? Ok well, they’re white so their views don’t count! Erika and Nicholas Christakis definitely have white privilege, even if they wouldn’t have been the right kind of white for the 1924 US Immigration Act and would have been targeted by the KKK back then. Douglas Murray and Jordan Peterson? White men! One’s gay and they both emphasize the importance of evidence and free speech? Well, rationality is just a tool of the white male patriarchy. Ben Shapiro and Mary Lefkowitz? Well, they’re Jewish and we all know Jews control everything. What do you mean the Protocols of Zion was a hoax?

I may have had the pleasure of being called a “Paki!”; “Wog!”; “Bubble!”; experience racist verbal abuse; have the privilege of being shot at (ok, only with an air rifle but as a kid that was rather scary!) and physically attacked; be honoured by being constantly stopped by police as a young man and often at airport security as an adult, but thank goodness for my white privilege. And scrambled eggs!

It seems those within minorities who have differing views are not reliable sources and should know their place.

Back to that claim of reliably sourced. The SPLC citation provided is from a blog appearing on its website, which mentions NER in passing with the epithet far right. The article is not about NER nor does it make a case for labelling it so. It is just that, a label, an opinion, name calling. This counts as a reliable source? Claiming so is contrary even to Wikipedia’s own definition of reliable sources.

“Material such as an article, book, monograph, or research paper that has been vetted by the scholarly community is regarded as reliable, where the material has been published in reputable peer-reviewed sources or by well-regarded academic presses.”[4]

Wikipedia, for all its neutrality, not only refuses the NER any self-description of its raison d’être (only allowing citations of third parties to its far right sympathies and Islamophobia) on the grounds this would be promotional,[5] but its SPLC citation goes against its own policies; according to which, “If a news organization publishes an opinion piece in a blog, attribute the statement to the writer, e.g. “Jane Smith wrote …” This is in order to assign opinions to the individual in question, rather than give the impression it has been endorsed by the organization.

The SPLC is not a news organization but a legal advocacy group with a focus, according to Wikipedia, on “fighting right wing extremism,” (what was that definition again?) which it attempted, to its cost, against that right wing extremist Maajid Nawaaz. Does this nuance, then, exclude it from Wikipedia’s policies when it comes to blogs? Then again, what’s a policy between friends?

As for Mr Dorling, his article is a research paper for The Australia Institute, described by SourceWatch as a ‘progressive’ organization which “funds commentators who appear on radio and TV and pretend to be ‘non-partisan’.” [6] SourceWatch is itself hosted by the Center for Media and Democracy, in turn described by Wikipedia as ‘progressive.’

Having a progressive SourceWatch describing The Australia Institute as progressive leaves Mr Dorling’s article I don’t know where, in terms of political orientation—progressive progressive? Progressive extremist? Like the SPLC citation, it contains no qualifying of the label far right and seems to be based on flawed logical assumptions. Not even wrong?

* Since this article was written Wikipedia has removed the SPLC citation but has replaced it, hydra-like, with many more in similar vein. These citations include the claim Joel Busher has found NER “to be part of the broader counter-jihad ecosystem,” when in fact Busher clearly states it is “not specifically associated with the anti-jihad network.”

_____________
[1] The phrase attributed to Wolfgang Pauli in reference to such poor reasoning it does not lend itself to falsifiability or rational discussion.
[2] The Encyclopaedia Britannica, a reliable source of worldwide repute, notes the SPLC, “…has been charged with… promoting a left-wing ‘politically correct’ agenda under the guise of civil rights.”
[3] CNN Analyst Areva Martin Scolds David Webb For ‘White Privilege .’ He’s Black. https://www.youtube.com/watch?v=ThiEENXyiwg.
[4] https://en.wikipedia.org/wiki/Wikipedia:Reliable_sources#Definition_of_a_source last accessed 28/05/22
[5] Although it does not apply this principle to the New Statesman, American Humanist Association, The Economist, The New York Times, Movement for Black Lives, the United Nations, the EU, SourceWatch – need I go on? (all entries accessed April 2022).
[6] https://www.sourcewatch.org/index.php?title=Australian_think_tanks#Progressive_but_Non-partisan_think-tanks last accessed 28/05/22