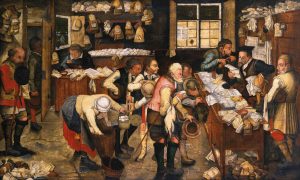 The universal Shakespeare, as we should expect, has no difficulty in covering the economic travails of our day. He does this in Timon of Athens, the record of a crash. The play concerns a rich man who runs through his inherited fortune, leaving him penniless and reduced to railing against the Athenian bankers who refuse to roll over his debts. They represent the ‘City.’ Capitalize it, as the Folio does, and ‘City’ means much what we mean by it, the financial centre of London. This sense is what Timon invokes, as he bids his dinner guests be seated.

That is meant to suggests a banquet as given in the City of London, an Act 3 feast like Macbeth’s Act 3 feast. It is the symbolic centre of the play. The secret equation is Athens = London.

Timon goes on to strengthen the equation. The blasphemous grace before the feast begins:

The gods require our thanks. You great benefactors, sprinkle our
society with thankfulness. For your own gifts make yourselves praised;
but reserve still to give, lest your deities be despised. Lend to each man
enough, that one need not lend to one another, for were your godheads
to borrow of men, men would forsake the gods.  (3.6.69-75)

Timon has an acute premonition. As write, men are indeed forsaking the gods of banking. Men need to ‘lend to one another,’ but the bankers fail to provide the wherewithal, they ‘still reserve to give.’ That process is known to us as rising interests rates (capped in Shakespeare’s day by law at 10%). The ironic
‘You great benefactors’ covers the gods, to whom the thanks are nominally addressed, and the City  magnates at table, who are the targets of the satire. The men of money, ‘Most smiling, smooth, detested parasites’ (3.6.90) are the leaders and emblems of what Athens has become, the type of a corrupt and decadent society.

The credit crunch drives the plot of Part One, whose details are exposed with savage accuracy. The Senator/Banker takes alarm:

And late, five thousand; to Varro and to Isadore
He owes five thousand, besides my former sum,
Which makes it five and twenty.  Still in motion
Of raging waste?  It cannot hold, it will not. (2.1.1-4)

That is an objective, professional assessment, with real numbers. More than that, the Senator/Banker has a case, and is allowed to put it:

My uses cry to me; I must serve my turn
Out of mine own; his dates and times are past,
And my reliance on his fracted dates
Have smit my credit.  I love and honour him,
But must not break my back to heal his finger. (2.1.20-24)

Fairly put: creditors have their rights too, as Shakespeare would know, having taken a man to court over the payment of £1.15.10. The system could be destroyed by propping up those who have abused it. Still, the time to denounce usury is before a debt crisis, not after. The task of recycling Timon’s debts might
well daunt a consortium of creditors, the more so as he shows no sign of understanding the situation’s gravity. Since the sums spiral upwards, they can be taken as signs of inflation, an objectively  depreciating currency, or a diminishing hold on reality. Timon’s Steward Flavius, his risk manager, tries wíthout success to warn his master of the looming dangers. It all leads to the crash, and Timon’s admission of bankruptcy. Is there a line in this analysis of a Jacobean crash that one could not, with entire ease, match match with reports from the financial press today? At Timon’s last feast, the dishes on the table are revealed to contain only smoke and lukewarm water. ‘Uncover, dogs, and lap.’ It is over. For Timon, only a bitter exile in the woods remains.

Timon of Athens is listed in the Folio, and subsequently, as by Shakespeare. Contemporary scholarship is certain that Shakespeare collaborated with Middleton, and that Middleton wrote most of the first half of Timon. That makes it a savage City comedy, in Middleton’s best vein. Middleton knew his London, and writes an all-too recognizable analysis of a bankrupt and the society that nurtured him. And Shakespeare went along with his collaborator’s account.

Prev93 and Not Dead Yet: By George, She’s Lost It!
Not Even Wrong or Scrambled Eggs!Next