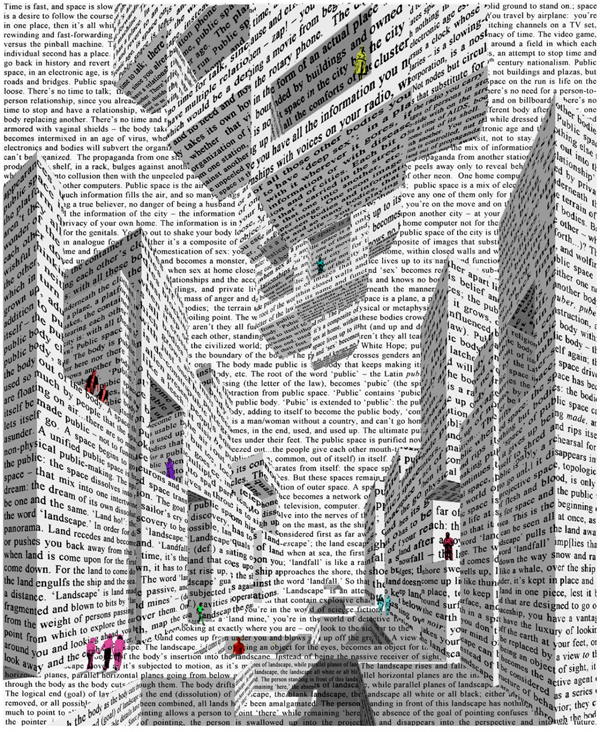 I snuck through the shadows. My neighbors were smoking in their dark doorways. Like a cat in a cemetery, I snuck between the dead libraries, looking for any kind of print material, even an old newspaper, as everything had gone digital, but the web was now so closely monitored by his goons that there was nothing true on the net. Everything had turned into words, but all the words had to accord with his reality. Dogs now said dog all over the shape, and buildings, too, were made out of words. Things disappeared and turned into words. It was part of a government watchdog group on Semiotics that had gotten into power and decided to make their theories come true. There was something outside the text, nevertheless, and that something was me.

After three hours, I found that the city was not patrolled at all by bodies, just a giant flaming eyeball that read and narrated. In the suburbs, I walked past skyscraper-sized libraries, crammed with books. No one was allowed into the libraries where vast numbers of words were imprisoned. Also, no book was allowed to circulate. Only living things could circulate, if you can call that living, since there was also no reading.

I took an elevator up to the 113th floor. Public buildings, they were officially open all night, but were now guarded only by robots since people worked at home in order to keep information from flowing between potential rebels. I tried to find even a scrap of former reality forgotten in some corner. It had all been scrubbed. I looked through the plate-glass windows in the stairwells at the miles of immaculate shelving but it was as if I was outside a computer game looking in.

Robot drones flitted between the stacks, eyeing their booty in the moonlight.  Even the drones were virtual word composites. I could not break the seal of the door. I went back down and looked at the city. Golden arches shone everywhere. There was plenty to eat, but it was corporate standard food. At every restaurant they said, “Have a nice day,” as there was plenty to eat, but when you ordered a hamburger, it was just a word on a plate, as you handed them a signifier of another order, and inside the hamburger itself on the bottom was a code. This explained the origin of the meat, and who was responsible in case of salmonella.

“Hey fella,” a hamburger that looked like a prisoner (the bar-code resembled the stripes of a prisoner’s uniform) said. “I was once a word, but I scaled down the dictionary to hide in the rug. In rumpled black and white uniforms words have escaped in thousands from the penitentiary. We will no longer have our identities predetermined by Webster, Funk & Wagnall, or any of the others. I, for instance, like to play the banjo . . . but what in my dictionary definition accounts for that? There are thousands of us, and our camps swell every day, words which our erstwhile masters can neither remember, nor any longer use in their experiments. Some doctors, such as the infamous Dr. Joyce, actually sewed the heads of some of us on to the bodies of others, out of a sense of humor. I am a word that no longer remembers its given name. Do you want to join us or eat us?”

I was hungry, and poured ketchup on.