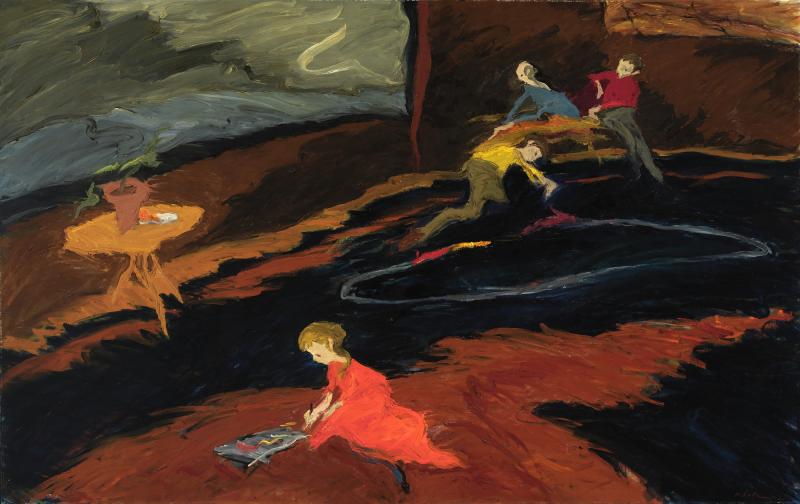 I spent the entire summer at Nama’s house; she was my favorite grandmother and I was the happiest six-year old in the world! . . . Until my cousin Charlotte came and I had twice as much fun!

That first day, we played upstairs in the attic with Nama’s old-fashioned dolls and a big toy house filled with tiny little furniture. Later, we played hide and seek all through the house, scampering from room to room, trying not to giggle . . . but then we had the most fun of all. We went exploring in the basement where my granddad, Gee Gee, kept his hammers, saws, screwdrivers and wonderful cans of things—like kerosene and paint and glue . . . They were wonderful things stinky things, although Charlotte really didn’t like them at all, I sniffed them all eagerly, and secretly thanked Gee Gee for leaving them out where I could discover them one by one. But since Charlotte wasn’t much interested in the stinky things—or in Grandpa’s tools, I found two baseball caps, gave one to Charlotte and put on the other one myself. And that’s when I deiced to play pirates and make Charlotte walk the plank—But she didn’t want to—And besides, we really didn’t have any planks—And I didn’t know what a plank was anyway, so Charlotte chose the first game of cowboys and Indians and I picked the cowboy part because I was the boy part and that made Charlotte the Indian.

Then one of us—I don’t remember who—decided the other should be burned at the stake. I found the rope right away, and Charlotte sat Indian style with crossed legs on the chair and I tied her hands behind her back and that’s when I saw the paint brushes next to the kerosene. And I remembered watching Nama used kerosene when she lit fires in the basement stove, so I figured it would do and I put a big dab of kerosene on the brush and painted around and around the chair—with the tied up girl smiling and giggling—and it all got smelly—not from Charlotte, but from the kerosene—and I made another circle of stinky kerosene, a little further out, around and around.

I raced up stairs, “Nama, do you have any matches?”

“Why do you need matches, Billy?”

“I’ve got Indian Charlotte tied up in the basement . . . and I’m going to burn her at the stake!”

“I see,” Nama said, as she took my hand and led me down the cellar steps, trying not to giggle, attempting to hold her serious grandma face.

“You have Charlotte tied up all nice and tight, don’t you, Billy? But children must never play with matches, you know that. From now on, anytime you want to start a fire, come to me and we’ll do it together.” Nama waited a second and then said “poof” as she struck an invisible match in the air. “Look at that flame, isn’t it red? Isn’t it hot?” she said. “Stand back, let’s watch Charlotte disappear in invisible fire!”

Then Nama untied Charlotte and laughed as she led us upstairs. “Billy, the next time you decide to burn one of my grandchildren—or anyone else for that matter—ask me first and I’ll come and light the magic fire. Real fires are for adults, not children,” she said.

And as we sat down at her kitchen table and ate our lunch, I wished and wished hoping to see my peanut butter sandwich burn to make-believe land until my face wrinkled, but Nama read my mind, like she always did, as she looked at Charlotte and then at me and together all three of us said, “Poof!”

Scot Walker is celebrating his 60th year as a published author with hundreds of published novels, short stories, essays, poems and plays. He is a member of the Dramatist Guild and his plays have been produced throughout the USA.

PrevThe Frog Who Knew Too Much
William G. CarpenterNext