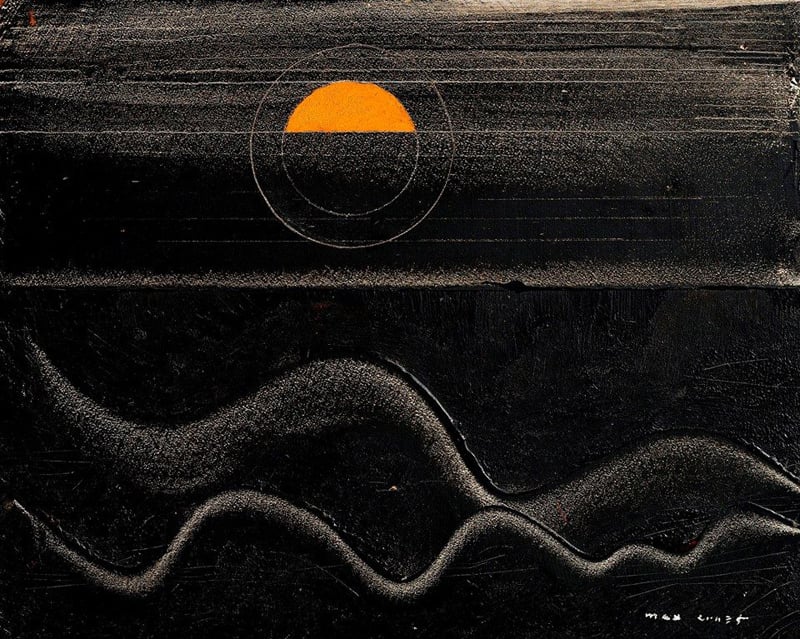 The 1968 classic movie Rosemary’s Baby, directed by Roman Polanski and based on a bestselling novel by Ira Levin, is worth reflecting on today amidst the pandemic climate of fearmongering and dark forces in the world. The film version of the book is a masterpiece in conspiracy and the ostensible banal of evil. It also draws parallels with much justified scepticism and confusion in the year 2020, but I’ll come to that later.

The overall themes of Rosemary’s Baby are conspiracy and the occult; thus, it details the torment of a young pregnant woman who finds herself manipulated by a coven of high-society witches and warlocks at a New York City apartment block.

This satanic elite, mostly elderly ‘pillars of society’ who want to see Rosemary locked-up under house arrest and living in fear and confusion, is a coven in sheep’s clothing: Doctors, friendly, professional ‘experts’ (Mmm . . . ), who try to manipulate Rosemary to give birth to the antichrist. Any sane person who sees this movie might think twice before mocking plausible, factual conspiracy theorists (people who question known liars and would rather be justifiably suspicious in their reasonable research than be a gullible, optimistic Pollyanna who believes everything by blind faith that the disgraced, fear-porn media and politicians tell them).

Unlike the majority of horror movies prior to it, Rosemary’s Baby has moments of humour and is void of Hammer-House-of-Horror schlock, gore and gratuitous blood scenes; it even has an arthouse feel to it, which makes it more disturbing.

It opens in New York City in 1965, a watershed year in the decadent decline of Western civilization, with a wide shot of the Dakota Building. This is the place of John Lennon’s murder, in the Upper West Side of New York City; a kind of arty ‘Park Avenue’ inhabited by old-money residents of the ‘Big Apple.’ 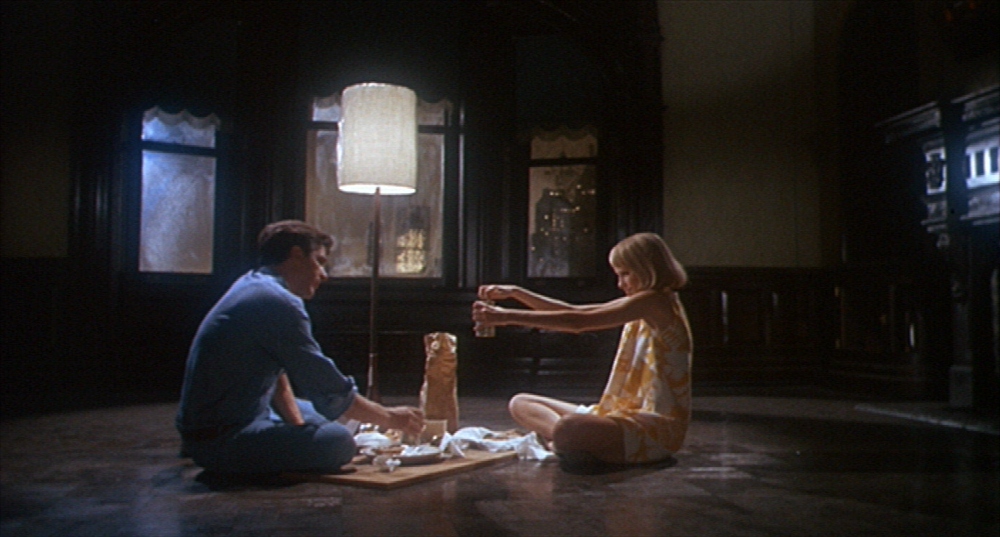 In the movie, the apartment block is called the ‘Bramford Apartments,’ a building with a reputation for alleged strange events in the past involving cannibalism, murder and black magic. A young couple, Guy and Rosemary Woodhouse (Mia Farrow and John Cassavetes), rent an apartment in the Bramford and soon befriend an elderly couple, in an adjoining apartment, called Roman and Minnie Castevets (Sidney Blackmer and Ruth Gordon).

Unbeknown to Guy and Rosemary, the Castevets are members of a satanic coven. When they invite the young couple to dinner in their apartment, Roman privately informs Guy, a struggling theatre actor seeking key roles, that he can enhance his acting career so as he can get “those initial breaks.”

Guy is also asked to join the coven, without Rosemary’s knowledge, to make his career succeed quickly. But the price he must pay is to get Rosemary drugged in order to be impregnated by Satan during an occult ritual. Guy, who initially didn’t like the old couple, agrees and becomes friends with them, thus he is soon offered a leading role in a top play after the original actor suddenly becomes blind.

Over the coming weeks, Rosemary’s notices Guy, who is landing big roles in the theatre, is turning into a cold narcissist, similar to many contemporary celebrities, who seemed to have ‘sold their souls to the devil’ for fame and fortune. One night, Guy arrives home with flowers for Rosemary. He tells her he’s ‘been a jerk’ and says, ‘let’s have a baby’, and circles the date on the calendar that is the best day to conceive (unbeknownst to Rosemary, the coven determined such days based on Satanic numerological: October 4 or 5; the year is 1965).

After a romantic dinner, with Rosemary’s mousse spiked with stuff Minnie gave to Guy, she becomes dizzy and starts hallucinating, seeing herself surround by a coven of witches and Guy, manifesting into a swamp creature like a caricature of a demon, as he has sex with her. 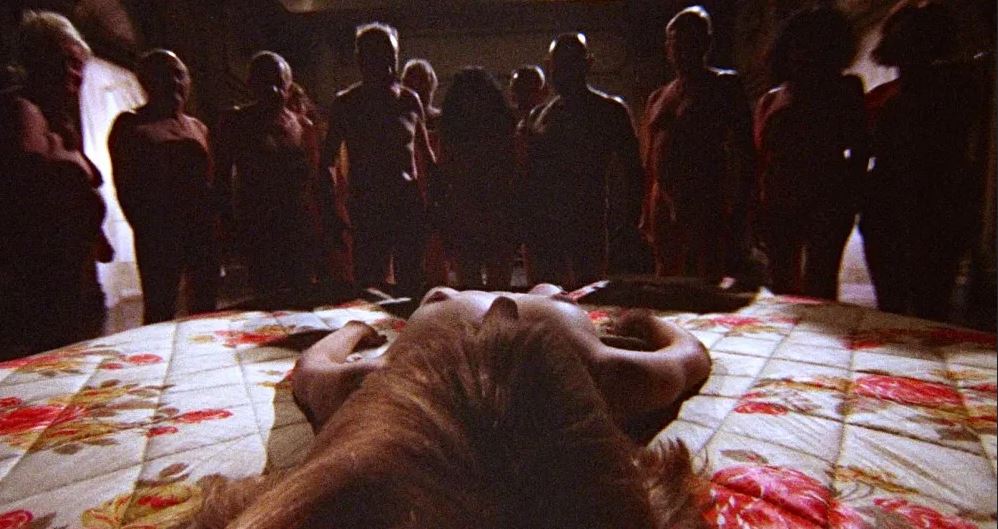 Soon after this night, Rosemary’s learns she is pregnant. The Castevets advise Rosemary to see ‘the finest doctor’ in New York, Abe Sapirstein, who delivers babies for the elites. What Rosemary is unaware of is that Sapirstein, and all the ‘respectable’ friends of the Castevets, are all part of the Satanic coven and are monitoring her daily moves. Rosemary becomes suspicious of this when her close friend dies, as he’s seen as a threat by the coven. Rosemary receives a book from him entitled, All of Them Witches, which outlines the Castevets’ Satanic connections and rituals.

After some gas-lighting, Rosemary tries to escape the coven’s control but she is tracked down and brought back to the apartment, where she is drugged by Dr. Sapirstein and she later goes into labor giving birth to a baby boy. When Rosemary sees the baby’s reptilian-type eyes, she starts screaming. Roman Castevet tells her: “Satan is his father, not Guy. He came up from hell and begat a son of mortal woman.”

The baby’s birth is the new “Year One,” which is numerically 6/66. What is strange about the release of both book and movie, is the timeframe, which occurred just before and at the end of the Summer of Love. A time when Polanski’s wife was pregnant and murdered by the Manson Family in a Satanic-like attack. It’s also interesting to note that the mid-1960s was a year that saw a major societal shift in the West that led to the Sexual Revolution and the breakdown of the Nuclear Family. In a scene in Rosemary’s Baby, Rosemary is heavily pregnant waiting in the doctor’s surgery, where one of the magazines in view is Time (1966), the headline of which: ‘Is God Dead?’

During that time in America, heralding in the year at Number One, was, portentously, ‘The Eve of Destruction’, sung by Barry McGuire; The Bible says: ‘For they have sown the wind, and they shall reap the whirlwind’ (Hosea 8:7).

That year also saw the culmination of Vatican 2 and the [New] Catholic Church’s watered-down teachings, thus loss of power over decadent Hollywood and unbridled promiscuity.

Fast forward 52 years from the movie’s release: Today in post-Lockdown 2020, many authentic Catholics feel like ‘Rosemarys’. They’ve become suspicious of the world around them and wary of sinister ‘experts’ announcing the so-called ‘New Normal’ and coming Elixir vaccine. Some Catholics don’t even trust the Vatican anymore, and most church leaders seem to be more of this world than spiritually inspired by the Magisterium. 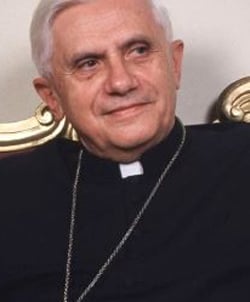 As for the existence of the Devil: Like Rosemary who rightly suspects an evil plot to ‘get her,’ Catholics find themselves in a similar situation in the grip of a hostile satanic secular West hellbent on keeping churches closed, if not torched and destroyed. And like Rosemary, they feel gas-lighted for not wearing face masks and believing every single word the politicians and the media tell them.

More: Just like Rosemary, they feel they are at the mercy of advice from ‘experts’ in knowing what is best for their health and safety. As for Church leaders: They now act more like the enemy within, treating Catholics like solitary ‘Rosemarys’ lost in a sea of confusion and Papal doublespeak. In an interview in The Ratzinger Report (Ignatius Press, p150), Cardinal Joseph Ratzinger (R) said ambiguity is the hallmark of the devil. And Jesus said, “All you need to say is simply ‘Yes’ or ‘No’; anything beyond this comes from the evil one.” 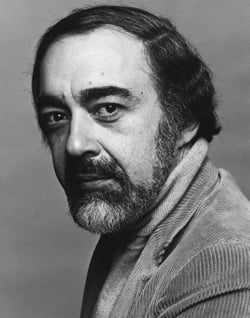 As for Satan: The writer of Rosemary’s Baby, Ira Levin (R), didn’t believe in the existence of the evil one. In a New York Times obit of November 14, 2007, Margalit Fox wrote about Ira Levin (who died aged 78), a mild-mannered playwright and novelist who liked nothing better than to give people the creeps—and who did so repeatedly, with best-selling novels like Rosemary’s Baby, The Stepford Wives and The Boys from Brazil.

Levin said: “I feel guilty that Rosemary’s Baby led to The Exorcist, The Omen,” he told The Los Angeles Times in 2002. “A whole generation has been exposed, has more belief in Satan. I don’t believe in Satan. And I feel that the strong fundamentalism we have would not be as strong if there hadn’t been so many of these books.”

“Of course,” Mr. Levin added, “I didn’t send back any of the royalty checks.”

Surrounded by a cabal of evildoers, Rosemary felt like she might be seen as a crazy fundamentalist. Many sane people today would empathise which such feelings. It seems the devil never had it so good . . . for now.