Nine years ago on a brilliant late summer day on September 11, 2001 I witnessed the murders of 2700 innocent victims of Muslim terrorism and the destruction of an icon on the lower Manhattan skyline, the twin towers of the World Trade center. ”This is the Pearl Harbor of the 21st Century,” I commented to my son and his partners in a midtown law firm as we witnessed their collapse into plumes and incalculable carnage in lives lost. Not unlike the Japanese Shinto militarist pilots who took the lives of American sailors, marines, soldiers and airmen on December 7, 1941, the shaheeds, martyrs in Arabic were xenophobic Arab Muslim jihadis from Egypt, Saudi Arabia and Yemen. They were schooled in hate against us as infidels for occupying their holy lands. They were wedded to the delusion that their sacrifice would receive Allah’s mythic heavenly gifts. All these jihadis were the product of privileged educated households and schooling in the West. These were not young men raised in poverty and ignorance. They knew what they doing. They were out to kill us.

Late that day, I spoke to ash-covered survivors who had escaped the destruction and death at what we now call ground zero. I listened to their gripping tales of watching helplessly as bodies fell from burning upper floors and the bravery of fire, police and emergency personnel who unflinchingly gave of their lives in trying to secure the safe passage of those fortunate enough to escape this burning holocaust.

Nine years have passed, but the graphic images of what occurred that horrific day have not dimmed. Interminable plans and designs come and go about memorializing this hallowed ground. But nothing has been built. 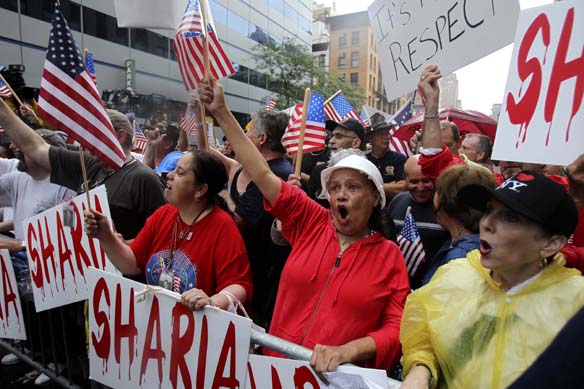 Instead we have the abomination of a callous affront to the memories of these honored dead in the form of a mosque and Islamic community center a few blocks from ground zero. Originally called the Cordoba House initiative, that name should not be lost on you. It harkens back to the great wave of Muslim conquest of Al Andaluz in Southern Spain and the construction of the Mezquita Mosque on top of a Catholic Cathedral in Cordoba, an early symbol of Muslim triumphalism and conquest. The controversy surrounding the Ground Zero mosque project and New York City Community Boards and Landmark Commission decisions have aroused public opinion among New Yorkers and many Americans. 3/5ths of New Yorkers polled by the Siena Research Institute do not want the Ground Zero Mosque built. 70 % of Americans surveyed by CNN/Opinion Research oppose building a mosque in the Park Place location.  The majority of respondents in these polls are sending a message. That to build a mosque there is insensitive to the memories of the survivors and the victims’ families.

That callous insensitivity is the subject of a new film, “Sacrificing Survivors; The Ground Zero Mosque Story” produced by the Christian Action Network and PRB Productions which is to be released in late September. The film producers note the scope and theme:

Travel as undercover cameras actually take you into the mosque to see firsthand the unnerving prayer room and, alternatively, the counter-protests on the street corners. Most dramatic is the film’s message delivered by family members of the victims and the survivors of that tragic day. As this mosque stays on track to be built each of them are truly becoming America’s ‘Sacrificed Survivors.’


Here are comments of several survivors from the transcript of this film about their personal losses and experiences that fateful day:

Tim Brown, New York firefighter: “I was in the Marriott… my legs were in the air … I saw bodies’ falling… it was a terrible thing they did to us…the devil is smart… (My friend) called from the tower, and said… ‘I love you brother, I may never see you again.’ “

Al Santora (his son Christopher Santora, of Engine 54, was the youngest firefighter to die during the attack on 9-11: “I saw a 2nd plane coming into view on the TV, then I looked out the window and saw it hit…Christopher’s body was found 2 days later.”

Madeline Brooks, New York City resident, a counter-jihad activist and writer: “I saw ash, little white flakes, coming down. These were pieces of PEOPLE…. It felt like evil was holding us in its hand.”

Michael Burke, brother of firefighter Capt. William F. Burke Jr., Engine 21, who died in the attack: ”I received a call that we were under attack… Billy called from the firehouse… I walked through the neighborhoods and saw the refugees… Both towers collapsed; I knew Billy was down there.”

Andrew Sullivan, construction field supervisor, and founder of www.bluecollarcorner.com, survivor of 9-11 attack: ”I was working across the street on 9-11. Something came into view that didn’t fit. We were the first responders. The second plane crashed… We stayed as long as we could… it was a cloud of death… called Jody, the first girl I ever loved.”

Tim Sumner, co-founder of 9/11 Families for a Safe and Strong America, brother-in-law of firefighter Lt. Joseph Levy, Ladder 15, who died in the attack: “Saw the second tower fall… This is the kind of thing that makes you turn to God… Who was Joe? He was an adventurous soul, which made for a great firefighter. He was a real New Yorker, tried and true. At 3:30 AM. We learned that Joe was on the missing list. He took a cut in pay to be a firefighter… they found his remains in the south tower…We got closure, but 1,100 families did not.”

Lt. Jim McCaffrey, Ladder 31, Co-chair of Advocates for a 9/11 Fallen Heroes Memorial, comments on death of Oreo Palmer, Deputy Chief, Battalion 7: “Sister-in-law called… I went off to work when we got the call… Oreo went to the south tower. He got to the 78th floor.  Later they found the audio… he described the carnage…We never got official notification… there were no remains found for 40 percent of the victims.”

Maureen Santoro: “They said they had found a whole body … I learned later that meant they had 50 percent of his body parts… I thought he’d walk through the door with amnesia… last week they found bone fragments at Ground Zero. I’m possessed by this. If this isn’t a cemetery, I don’t know what is…”

Lee & Eunice Hanson, whose son Peter, his wife and 2 year daughter Christine were killed aboard one of the planes that crashed into the Twin Towers: “This was their last site on earth… the pain never goes away… they called us … “Peter Hanson called his parents just before United Airlines flight 175 crashed into the 2nd tower. At 9 a.m. Peter said to his father: ‘It’s getting bad, Dad. A stewardess was stabbed. They seem to have knives and mace. They said they have a bomb…I don’t think the pilot is flying the plane. I think we are going down. I think they intend to go to Chicago or someplace and fly into a building. Don’t worry, Dad; if it happens, it’ll be very fast… my God, my God!”

Here are comments from some of the survivors in the film about the insensitivity of a Ground Zero mosque.

Jim McCaffrey: “The mosque is an insult… it’s the site that is the grave for many people… the same ideology that spurred the terrorists to attack us is behind the mosque… it’s very offensive… It’s as if they’re dancing on the graves of our loved ones.”

Madeline Brooks: “This is opening the floodgates for more Islamic domination … a symbol of victory. It is the most horrible insult to the families… a triumphant gloating. Rauf even said: ‘Those who are hostile now will see their children and grandchildren become Muslim. “

Narain Kataria, President of the Indian American Intellectuals Forum: “America is like heaven on earth … Islam hasn’t given America anything good but death and destruction… this mosque is a deliberate attempt to insult and humiliate us… mosques breed hate…there is madrassah, then a Taliban, then they teach jihad, then they become terrorists.”

Note what film producer Martin Mawyer says about current plans for a Ground Zero Memorial and the comments of survivors: “Plans for the 9-11 memorial and museum have changed numerous times over the years, but still no permanent memorial has been erected, a fact which greatly distresses the survivors and victims’ families. To add insult to injury, the latest plans call for the memorial to be built below ground, and the ranks and titles of the first responders will not be allowed. The official opening is scheduled for Sept. 11, 2011. It’s no coincidence that the Grand Mosque planned for Ground Zero, which will tower above all other buildings, is also scheduled for an official opening on Sept. 11, 2011.”

Lee & Eunice Hanson: “Now we learn we’ll have to go 7 stories underground for the memorial.” They will spend $100 million to build [the Mosque]… They won’t tell us where the money is coming from. I fear it is coming from the same blood-stained hands as the terrorists who took down the towers.”

Tim Brown: “They’re burying the heroes of 9-11 underground and putting a mosque above them… Sometimes you have to call evil, evil.”

Andrew Sullivan: “They want to build a mosque on the ashes of my dead loved ones. We are fighting two wars based on the tenants of this mosque… Imam Rauf says he wants to build bridges but they are planting the seeds of Sharia. That’s the end game. I stood there with the mayors and they promised to rebuild.”

“Imam Rauf lies about bridge building. He has ties to terrorism.”

I urge you to go see this remarkable and engrossing film. It is sure to awaken your collective memories of that horrific brilliant late summer day nine years ago, and raise your consciousness and opposition to the dominating image of a mosque like a conquering colossus astride Ground Zero in lower Manhattan.

To help New English Review continue to publish timely and interesting articles like this one, please click here.

PrevThe Good Letters: The Decline of Literary Education and its Consequences
Holocaust Poetry For Our TimeNext