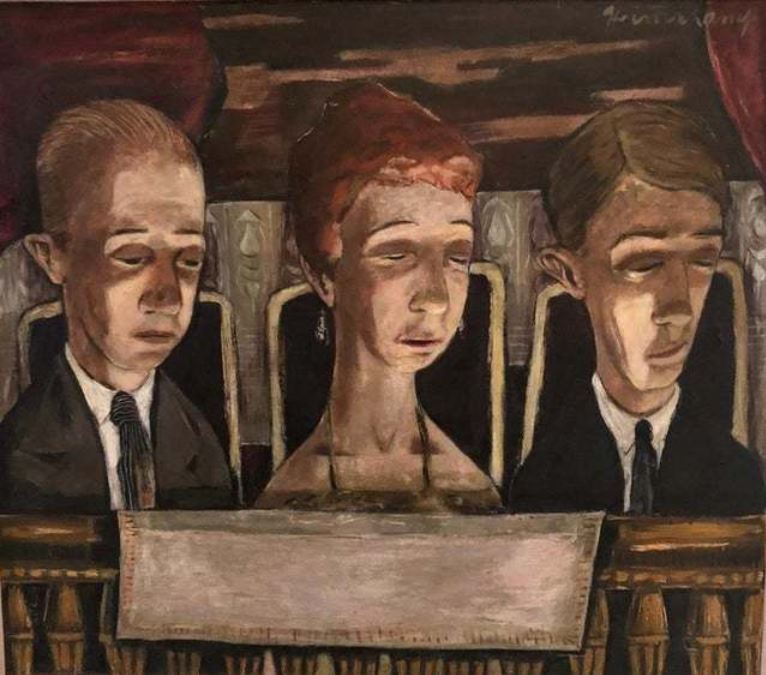 At the Theatre, Henry Glintenkamp, 1930s

This year’s Oscar “extravaganza” event posted the most dismal tv ratings ever. It was the least-watched in the show’s history.

The organizers of the Oscars can take some solace in knowing they are not alone in posting such lacklustre numbers. There has been a dramatic decline in interest in award shows of all kinds. Viewership of the Grammys, the Emmys and the Golden Globes have also fallen precipitously over the past few years.

It is tempting to blame the pandemic for this widespread absence of interest. But there are other reasons why the public has grown weary of these glitzy, over-hyped productions. Not too many years ago, everyday chatter included speculation about “Album of the Year” at the Junos, what tv shows were in the running for an Emmy, or the movies contending for the best picture Oscar. No more. People have ceased to care. What happened?

Doubtless, there are many causes for the waning public interest, but among the reasons is the politicization of the entertainment industry. Like everything else in our culture, these shows have become soapboxes for celebrities espousing politically correct groupthink. Hollywood has produced a new and unedifying creature: the preening, virtue-signalling actor, singer, or movie director who badgers the rest of us—the great unwashed—on the proper way to conduct our lives. These individuals have been granted that peculiar moral clarity that only fame and wealth affords.

One never tires of multi-millionaire celebrities wagging their fingers or thumping the podium as they tell us what to think, who we should vote for, or regale us with tales of the endlessly unjust society in which we are mired. The only redeeming part of our culture, or so it would appear, is that we have elevated to positions of fame, wealth and prestige Hollywood mavens so that they can diagnose for the common folk the evils of the world.

Our Hollywood ethicists are prepared to lead us to the promised land if only we would listen. We should be grateful for their wisdom. Who, for example, doesn’t benefit from listening to our modern-day Cicero, Robert De Niro, as he pounds the podium while shouting “Fuck Trump”? And who was not enlightened by the saintly Meryl Streep, as she treated us to yet another homily denouncing that same American President? I cannot speak for others, but I know I am much edified and doubtless a better person for having sat through their sermons.

In keeping with the woke mentality, awards must be fairly distributed across ethnic, racial and gender lines. Organizers of these events swear allegiance to the gods of diversity and fairness, but it is difficult to know what “diverse and fair” means in the context of cultural production. Are prizes now to be distributed according to strict racial, gender and ethnic quotas?

Calibrating artistic merit against the demands of diversity, inclusion, and equality (DIE) is guaranteed to please no one while making everyone suspicious of the winners. Indeed, this is what happened at this year’s Grammy Awards. Complaints of racism and sexism started almost immediately. But as the boilerplate response from the event’s organizers explained: “The Recording Academy and CBC condemn and denounce all forms of racism, sexism, violence, anti-Semitism, and hate. Let’s continue to use music to bring people together, leading with love, healing, and a sense of unity across all lines of difference.” What a relief.

I have a modest proposal to enable the entertainment industry to escape its self-made Gordian knot. The connection between artistic merit and the granting of prizes has always been fraught, owing as much to the backroom maneuvering of public relations shills as to the intrinsic value and worth of the cultural product itself. It is not cynicism but merely clear-eyed realism to note that when artistic merit bumps up against commercial considerations, it is the latter that prevails. When Elvis was asked which of his recorded songs was his favourite, his response was immediate, “Love Me Tender.” When asked why he gave a simple answer: “Because it sold the most records.”

Elvis understood what many lesser artists do not. However much we attempt to glamorize it, show business is, first and foremost, a business. Or, if you prefer, it is a popularity contest, one that calculates artistic integrity and merit by the number of gross units sold. Let’s have no illusions. The raison-d’etre of an awards show is to move product: the Grammys are about selling records, the Emmys exist to promote television, and the Oscars are about getting people to watch movies.

At day’s end, acknowledging this simple truth is wonderfully liberating for both performers and consumers. There need be no more preening and posturing from celebrities. We will be spared the moralizing of woke narcissists, the sort of people my mother-in-law calls “notice-me-boxes,” mouthing politically correct platitudes. Performers need no longer be distracted from their actual business of creating commercially viable products to take to market. Awards will now be a straightforward matter of tallying sales. Like those small girls who sell us their Girl Guide cookies, the munchkin who sells the most cookies get the kudos.

When hosting the 2020 Golden Globes award, Ricky Gervais helpfully reminded his audience, “So if you do win an award tonight, don’t use it as a political platform to make a political speech. You’re in no position to lecture the public about anything. You know nothing about the real world. Most of you spent less time in school than Greta Thunberg. So, if you win, come up, accept your little award, thank your agent and your God and fuck off. OK? ”

Mr. Gervais cut to the core of the matter. The organizers of award shows should take notice.

But what to do about the declining numbers who view the Oscars? It’s not too late to save the show from its woke-induced death rattle. As the ever-optimistic P.G. Wodehouse put it, “I’ve seen worse shows than this turned into hits. All it wants is a new book and lyrics and a different score.”