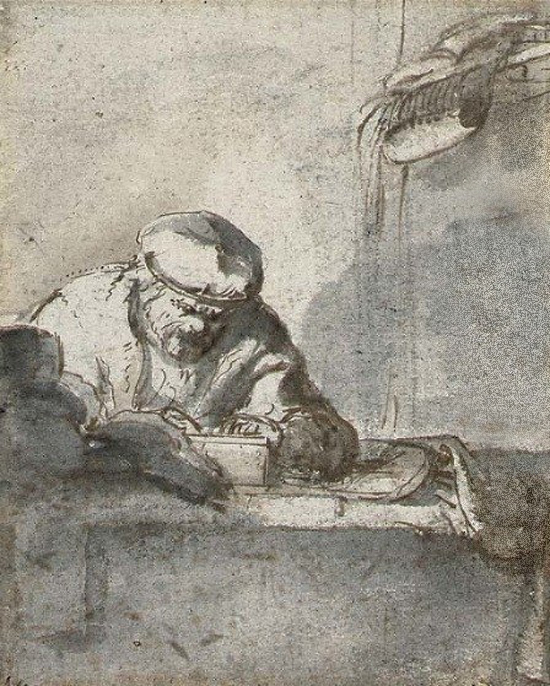 Like love, one of the students remarked, at least as far as Luhmann sees it, which contrary to popular ideas about love consisting of romantic fusion, is rather a semantic discourse to keep intimacy going through misunderstanding. Or like texts which write themselves, someone else ventured, as the post-modernists like to say for all the wrong reasons. —Stephen Schecter, March 2019, New English Review

You want to fall in love with words? They are like beautiful women; all it really takes is to meet them. Don’t be shy. You needn’t speak right away. Just position yourself somewhere in their proximity. You’ll fall under their glow, which you won’t be able to rightly characterize. Their specifics will elude you. In general ways you will be able to describe how one word might differ from another. In fact, in various ways you will be fairly able to describe them to others. You will even be able to buy books which will do so. But to identify that spark which makes you love it, to want to know it, to travel back in time with it and repeat its origins, will take a while. And then later, to testify as to how that word has enlarged you—in a way that caused you to find and use words for yourself and others’ greater glory—is the final statement.

Not all words are beautiful. Or, perhaps, we do not see every word’s beauty. And we employ them more or less as functionaries. We use them rather like a car’s steering, to keep us on the road to where we intend to go. There are all sorts of roadmaps made for just this use. And most of your conversation can be charted along them in red and blue lines. “What’s for dinner?” (Two miles ahead off I-50.) “Would you like to visit the Jamisons’ Friday?” (Five miles out Hwy 33.) “What did you think of that movie?” (Eight miles out Route 13.) These conversational roadmaps are like large clichés. They move commerce. They handle the day to day regularity quite well. It’s only when you go off-road that it becomes very plain how sloppily most words are employed. There’s a lot of play in the steering. And it’s not just the speaker’s fault. There’s a lot of play built into the function of most commonly used words. This makes them very forgiving and whatever. You’ll joggle along in approving company. It’s not like we’ll miss a common destination.

Read more in New English Review:
• Wilted Laurels (or, A Sad Ballade to Our Poets Inglorious)
• Hollywood
• Slavery is Wrong, How Can Abortion be Right?

It is often the more uncommonly used words in which the steering is still quite tight. Just try one out, and you’ll see what I mean. The other person’s brow might rise. They might clutch the conversational dash a little harder, or press the imaginary brake a bit with their left foot. Because you are talking erratically—which is fun when there is a lot of play within the words, but quite taxing when the meaning is distinct and clear. Like an abrupt shoulders’ edges, such words can grip a palaver and take it right off-road. Once off-road, it may take talented steering to maintain control. And proceeding from there will necessarily be an adventure. The normal thing to do—as a disinterested companion—is to imagine the disruptive word never said, or to dismiss it as a joke, or eccentricity, and like Yeat’s horseman, “pass by.” And if the uncommonly used words become more prolific, leave off the discussion. This person is obviously conversing too capriciously for conditions. Or, more likely, your companion is impaired by too much thought.

But off-road is where we fall in love. A best word can be both a precision navigator and supply the terrain at the same time. It’s a chimera. A word can provide the sand and brush it will lead you through. Isn’t that a lot like love? Or—to journey off-road along another path (choosing a different metaphor) —normal math might be fine for accounting, but if you are to describe the singular beauty of the curve, you will need a quadratic.

But enough of this scene setting. Most of the world lies off-road! So we should go there.

What began as an effort to improve my poems has led to these thoughts. The poems seemed alright as far as they went, and I had had a good time visiting many of the usually visited landmarks—love, home, family, nature, flowers, etc. —in shared terms. But I wanted to imagine a bit more than this well trod ground. I wanted my poems to sing and be memorable and to camp out under the stars in the dark, alone, like those early fur trappers, so as to have a few stories to share when I got back to town! So I studied, All the Fun’s in How You Say A Thing: An Explanation of Meter and Versification, by Timothy Steele (a very good book, by the way). As well as consulting my Thesaurus regularly and RhymeZone.

Suffice to say, my ideas are more ambitious than my accomplishments. All of a sudden I wasn’t writing two poems a day. I was working on one poem over several weeks, and leaving quite a few to stew in the drawer. As my friend’s Polish grandmother used to say, “You want perfect, you got to die.”

Nevertheless, as another playwright friend said, “If I like a word, I like to drop it into my play, and it takes me somewhere.” Like dropped acid, a crisply defined, singular word or phrase can be the doorway to another world and will spring like mousetraps when provoked.

Years ago I was driving a city bus when I stopped for this matronly woman. “You look awfully tired,” she wheezed, as she hoisted herself up the stairwell. “How many hours do you work a day?”

“Actually,” I said. “I only work only three and a half hours a day.” Then, feeling remorse about contradicting her so abruptly, I added: “If I work longer, I get these terrible rashes.”

The woman stopped, put her hand to my shoulder and replied, “My aunt had that!”

From where did this erupt? Well, you see, I’ve always loved the phrase, “terrible rash.” And I’ve a flock of these like-loved terms hanging in my mind like copper pots and pans from a fancy kitchen ceiling, ready to do service. Just give me the ingredients.

For example, let’s start with the word: love. An excellent word to be used in general conversation as it generally provokes the approval of everybody of any age who feels they have suffered it, and who will feel that they know what love means and will define it, even though the various meanings and definitions might vary widely from individual to individual, and can in fact make one wonder if the describers haven’t gotten hold of two antonyms, actually.

Nevertheless, this makes “love” a perfect word for a conversational thoroughfare to wherever (. . . such as, and marriage).

Let’s take this word, “love,” off-road. A quick perusal of any thesaurus gives us a cornucopia of possibilities. I shall choose the provided synonyms: “ardor” and “piety” and see what terrain these will take us over, though it would seem they are waving goodbye to each other even as they start out.

Ardor rhymes with Mordor, which immediately springs to mind—rather like “in” begets “. . . and out”.

There are so many crossed references, inferences, alliances & dalliances and downright mutual consensuses between words to speak of in open company that . . . well, I habitually shy away.

But, ardor—like a spirited horse—is a condition which will run amok.

In fact, ardor, Mordor, amok . . . visualizes a progression to me! This is what I see:

Ardor is not good at grinding its teeth and remaining still.

Ardor does best to declare itself; spring the trap and let fly,

hopefully to survive the bursts of flack launched. So to qualify as this word,

ardor must be strength tested like a construction material.

Ardor without strength is mere sentiment; a cheap affectation

like a novelty purchased for a dime at a seaside boardwalk booth.

And so we come to the meat of the word which is strength, so that

I’d suppose anything strong might express ardor, unrequited or not

immediately brings to mind the Pieta; compassion and reverence

modelled in stone, which adds weight and eternity, almost as if

compassion and reverence were a particular human burden or gravitas—

an affliction to be inherited as a member of the mortal community.

The sculpture makes piety at least heavy as sin,

but far more beautiful than the raw rock.

And the Pieta incorporates time, a narrative.

Something timeless has happened. How can this be?

Obviously, a little narrative goes ‘round and ‘round within this sculptural seed.

A story is spinning within this word “piety,” apparently.

So what is the raison d’etre or moral, respectively—depending upon the road taken—as we emerge from the (wordy) and tangled wood of this essay?

I would say that if you would make quicker progress in the world, you should keep to sloppy words so as to be able to travel at high speeds transporting yourself and others safely—without rigor hooking an abrupt shoulder edge leading to a death on the conversational highway. (That is, no luck for you tonight, Slick.) In short, this practitioner should talk about love loosely, vaguely; let them believe what they will, until drinking has gotten them to where his designs lead.

But if you would want to explore a bit, (the truth is out there), then more precision of expression would be in order. Perhaps taking the major arterials (common banter) to get you to the general vicinity of your interests, and then the smaller off-road phrasing until finally, on foot and picking your words one by one, gingerly (and with sensitivity!) so as to avoid hazards and not to step upon major finds—such as mutual compatibility—would then be best.