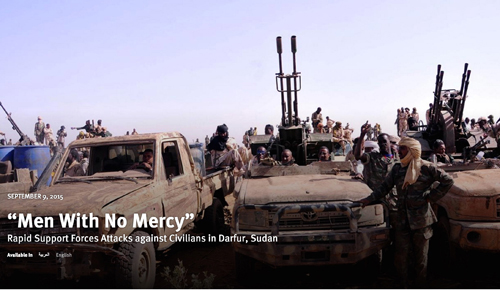 In the wake of the Trump Administration Executive Order on July 11, deferring a decision to permanently lift the 20 year sanctions against the regime of ICC indicted war criminal Sudan President Bashir, there was evidence of violations of two of the five tracks included in the original Obama Executive Order No. 13761 of January 13, 2017.

First was the brutal ejection by the Rapid Support Forces/Janjaweed militia (RSF/Janjaweed) of Darfur University students on a protest march. Second, were actions by the RSF/Janjawed against several communities across Darfur. Third, was further evidence of Sudan providing a base for the overthrow of the regimes of President Idriss Deby of Chad and the Libyan National Army (LNA) regime of Field Marshall Khalifa Hafter in Tripoli. The objective of the Bashir regime is to destabilize Northern and Central Africa creating a caliphate ruled under Islamic Shari’a law from Khartoum.

Amnesty International (AI) protested the forced ejection of more 1,000 Darfur students who resigned from Bakht al-Ruda University in Duwem in the White Nile State, located 190 kilometers from Khartoum. The students resigned because of discrimination they were facing at the University. They were prevented by the National Intelligence and Security Service (NISS) from traveling on buses to the capital of Khartoum to participate in a protest.

The problem started on July 18, 2017, when the University Administration dismissed 50 Darfur students. The students were protesting the false arrest and dismissal of 14 of their colleagues for accused of killing 2 police officers. The NISS agents banned the commercial bus system in Duwem from transporting the Darfur students. The students decided to walk the 190 kilometers to Khartoum. They marched 17 kilometers from Duwem and arrived at Sheik al Yagoot village where they were stopped by the NISS RSF/Janjaweed units who prevented them from continuing their journey to Khartoum. The Sheik al Yagoot village chief had provided them with food and water during the ordeal.

As events unfolded, the protesting students were surrounded by 17 RSF/Janjaweed heavily-armed Toyota Pickup trucks or ‘technicals’ and placed on buses the regime had arranged to transport them back to Darfur. The students eventually arrived in al Fashir, the capital of North Darfur on July 24, 2017.

The Sudanese authorities must end the continued discrimination of Darfuri students at universities […] as more than 1,000 Darfuri students of Bakht al-Ruda University [in Duwem] in the White Nile State, [located 190 kilometers] from the capital Khartoum. They were seeking to demand the release of 10 of their colleagues accused of killing two police officers.

The students are now blockaded on the southern edge of the capital Khartoum after they were stopped by NISS agents from delivering a statement listing their demands to the government. They also want 14 other colleagues who were expelled from the university readmitted. Instead of stopping them, the authorities should protect them and ensure that their grievances are heard.

“These students only want to present a petition to their leaders, but instead of helping and protecting them, the NISS have chosen to block them, in callous disregard of their rights to freedom of expression and peaceful assembly,” said Mutton Waynoka, Amnesty International’s Regional Director for East Africa, the Horn and the Great Lakes.

“Instead of stopping them, the authorities should protect them and ensure that their grievances are heard.”

The two policemen were killed on 9 May as they violently broke up clashes between ruling party and opposition students over disputed guild elections. Seventy students were arrested that day, all of them Darfuri. Investigations into the policemen’s deaths are still underway.

Note this excerpt from an article about the history of Bakht al-Ruda University by Darfur human rights advocate Juma al Wakhil, “Discrimination Conflicts in Sudanese Universities against Darfur Students.”

The Bakht al Ruda institute is well known to train teachers. It was the first institute established in the Sudan to educate teachers. However, following the 1989 military coup the Bashir regime changed some of the Sudanese civil society institutions into Mujihadeen training camps. For instance, the Senior Secondary Schools of Ghor Tagat and Hantub were changed into Mujihadeen training bases.  Osama bin Laden and other terrorists received trained on those bases. The regime destroyed the educational system that formerly existed in Sudan by burning books at Khartoum University. They destroyed the knowledge resources that educated people. Bakht al Ruda was changed from an institution training teachers into an institution training terrorists such as the current Director of the University.

RSF/Janjaweed Militia Rampage and resettlement of foreign recruits in Darfur

The forced ejection of Darfur university protest marchers by the RSF/Janjaweed was one example of the oppression of the Darfur people by the Bashir regime since the Trump sanctions deferral order was issued. President Bashir plans on mobilizing all government militias including the Border Guard Janjaweed militias commanded by Musa Hilal and integrate them into the RSF/Janjaweed militias. Two months ago RSF/Janjaweed families were transported from Chad and Niger and initially deployed in Geneina, the capital of the Western Darfur region. They were then moved by large trucks from Geneina to establish new villages around Gallab Mountain near Tabit, not far from al Fashir, the capital of North Darfur. On their arrival, the Khartoum regime delivered aid from al Fashir to help settle the new arrivals.

There has been increase in rampages by the RSF/Janjaweed militias throughout Darfur seeking to intimidate and ethnically cleanse the indigenous black African people from the region.

Beside looting and expropriation of property, kidnapping and ransom for release of hostages have become sources of funding and income for RSF/Janjaweed militias. As examples, there were reports of forced ejection from villages, torture, killing, and kidnapping for ransom in Kas, South Darfur and in Eastern Jebel Marra. A trader was kidnapped from Kas and taken to an RSF/ Janjaweed base near the town and security forces refused to go and release the man. Villagers were also kidnapped in the Katur area in Eastern Jebel Marra and their whereabouts are still unknown.

On July 22, 2017, ten people were killed in tribal clashes between Ma’alia and Rezeigat in Eastern Darfur region and the fighting is continuing. Both tribes are equipped with government supplied arms and trucks. Another group of RSF/Janjaweed militia, riding horses and camels, attacked farmers on their farms in the area of Hejair Tono. The militia force shot and killed five people and injured six others, some of who were seriously wounded. According to Hisein Abu Sharati, the Coordinator of the Internally Displaced Persons in Darfur, who was interviewed on Radio Dabanga on July 24, 2017, the RSF/Janjaweed militias have displaced over 500,000 people currently residing in the Kalma and Salam IDPs camps surrounding Niyala. The newly-displaced people are living in the open and no one is providing them with humanitarian assistance.

The RSF/Janjaweed militias are prohibiting villagers of Tabit and Taweela from cultivating their land.

Darfurians have no venue to bring complaints about their grievances or obtain justice in Sudan.

Sudan Support for the Overthrow of the Government of Chad

Adding to the volatile security situation in Darfur, a new Chadian rebel group has been organized and is being prepared to launch attacks from Darfur against the government of Chad. This new force unified several Chadian rebel factions under the leadership of Timane Erdimi, who is the cousin of current President Idriss Deby of Chad.

Timane Erdimi is the only known person among Chadian politicians to have embraced the Muslim Brotherhood organization and became a member. He was recruited by Sudan’s National Congress Party in the 1990s. The Bashir regime in Khartoum helped him with the financial and military assistance of Qatar and Saudi Arabia attempting to overthrow the government of President Deby of Chad. Erdimi organized a rebel movement, which launched a series of attacks between 2006 and 2009 but failed to achieve their objectives. He is among the foreign Muslim Brotherhood leaders who live in Qatar.

Recently, Erdimi with the support of Sudan and Qatar, united eight Chadian rebel factions under the banner of the insurgent Union of Forces for the Republic. Under his leadership, the objective of the new group is to finally achieve the overthrow of the Deby government in Chad.

President Deby of Chad recently declared that Sudan President Bashir, backed by his ally Qatar, are supporting these rebels and are planning to destabilize his government. He cut off diplomatic relations with Qatar accusing it of supporting terrorism and Chadian rebels (led by Erdimi) seeking to overthrow his government. These Chadian rebels are part of the RSF/Janjaweed militias that President Bashir has recruited to commit genocide, war crimes and crimes against humanity in Darfur, South Kordofan and the Blue Nile state. The Union of Forces for the Republic is currently based in Libya. The Libya Herald reported that Sudan, with Qatar and Iran backing, in coordination with the self-declared Islamic State province, were fighting the Libyan National Army (LNA) regime of Field Marshal  Khalifa Hafter.

The Libyan Observer reported a Sudan Army spokesperson accusing the LNA of seeking to overthrow his government in Sudan by providing a sanctuary for Darfur resistance fighters.

These Chadian rebels are also part of the estimated 150,000 Mujihadeen army that the Sudan government has been organizing since 2016 to overthrow the governments of Libya and Chad and to destabilize the Sahel region by establishing an Islamic Caliphate ruled under Islamic Shari’a. The unification of Chadian rebel factions is an indication of this strategic objective of President Bashir and his Arab allies that we have documented in various articles and posts in the New English Review, its blog, The Iconoclast, FrontPage Magazine and other on-line publications.

The US and international community should view with alarm the effort to overthrow the government of Chad, one of the few stable countries in the Sahel region. Further, the Trump Administration should appoint a qualified Special Envoy to Sudan and South Sudan and investigative team to investigate these and other accusations of non-compliance with the five tracks in the original Obama Executive Order temporarily lifting the 20 year sanctions against the regime of ICC-indicted war criminal Sudan President Omar Hassan al-Bashir. We urge the bi-partisan signatories of the House Foreign Relations Committee letter to President Trump issued on June 30, 2017 to pursue these objectives through requisite hearings as a furtherance of their recommendations contained in the letter.

Lt. Gen. Abdallah is Chairman of the Sudan Unity Movement. He is a native of North Darfur who joined the Sudan People’s Liberation Army (SPLA) in 1984 and became active in the Nuba Hills and Darfurians resistance movements. In 1989 he joined the Patriotic Salvation Movement in neighboring Chad based in Darfur. He served as an officer in the Chadian army for 23 years. He held senior intelligence and counterterrorism posts including as Coordinator of the Multi-National Joint Task Force of Nigeria, Chad and Niger. He was Coordinator of Pan-Sahel Initiative (PSI) Anti-Terrorism Unit of Chad and Commander of PSI Anti-Terrorism Battalion of Chad 2004. He is a December 2002 graduate of the Intelligence Officers’ Advanced and Combating Terrorism Courses, US Army Intelligence Center and Schools, Fort Huachuca, Arizona. He was a Counter Terrorism Fellow and a Graduate of the College of International Security Affairs, National Defense University, Washington, DC, 2005. He was an International Fellow and Graduate of the US Army War College, Class of 2008. He was Graduate of Nigeria Armed Forces Command and Staff College Course 22, of the year 2000.

Jerry Gordon is a Senior Vice President of the New English Review.

PrevF.I.S.H.
Meet the New Hamas, Same as the Old HamasNext