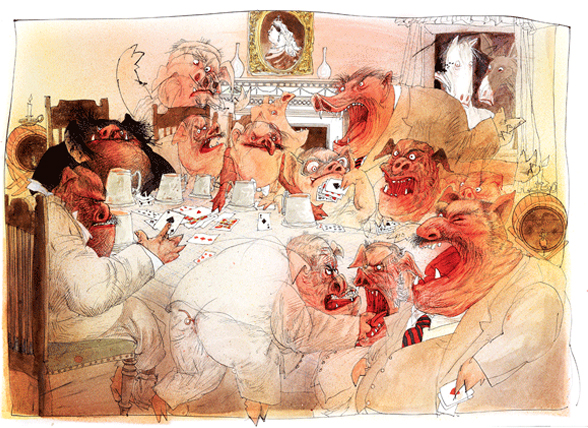 rust is the glue that binds all commerce and politics. Civic faith is the virtue the makes couples, communities, cities, and states possible. Alas, trust is honored now more in the breach. Recently, we discovered that Charlie Rose is an off-camera masher; Brangelina is no longer a pair; Calais, Detroit and Baltimore are still metastasizing and many “developing” nations were better off in the Third World. Indeed, in some neighborhoods—Mexico, Yemen, and Chicago come to mind—bullets are variety of population control. Major US government agencies are suborned, too, with concerns about trust, treachery and, some say, treason. Recent electronic evidence from several investigations raises serious questions about integrity, objectivity, and partisanship in the US Intelligence Community, the Justice and State Departments.

All the while, the public square is electric with fear; fear of reform, fear of new faces, fear of new ideas/new policies, and fear of buccaneers like Donald Trump and Vladimir Putin. Faint hearts and bed-wetters across the land cringe as a political rookie threatens to drain the Beltway swamp.

Calling a spade a spade is hazardous indeed. Trump, who rails against foreign and domestic slackers, allegedly cited certain developing (nee Third World) domiciles as “shitholes,” an echo of Barack Obama’s earlier comments about Libya. Trump haters on the left soiled their knickers nevertheless. Criticism of any established tyrants, or the status quo in general, is heresy. Mind you, no one ever denies the reality of domestic or foreign cesspools.

The urban turd has always been something of a civic misdemeanor. Somehow, calling political scat bullshit is now a social felony too. Withal, a democratically elected president is under siege by a hostile press, a disloyal national security apparatus, assorted deep state creatures, dependent demographics, and an American left yet to recover from the last election. What once might have been considered loyal opposition has morphed into cliques of sedition, if not treason? With hindsight, Orwell and Huxley are beginning to look like optimists.

These and many other painful truths about the early 21st Century are best left unspoken. For the politically correct, a local or national shithole demands a euphemism like underserved or developing. Alas, “developing” seldom answers the question “into what?” If the end game is scatological, keep it under your hat. All of which probably explains why a genuine shithole is called a loo, water closet, powder room, rest room, or comfort station. Ironically, “comfort” is seldom the first sensation that greets a pilgrim in any public pissoir, especially in Washington, DC.

Euphemism is a mask for truth; as candor is the hazard in all rhetoric. Truth is vulgar, painful, and dangerous. Fake news isn’t fantasy; it’s political ammunition. Repetition is the author of all conventional wisdom—and malice. Convention and political correctness are the harbingers of condescension.

And most certainly, belief and truth are not synonymous. We like to assume peddlers of fact and information are arbiters of truth. Print and electronic mediums hold themselves up as such. An assumption might be the most insidious belief. Journalists drape themselves in the flag or the 1st Amendment at every turn. Still, free and false are both protected by the American Constitution.

Fake news is still the most obvious symptom of weaponized reporting. Alas, there is no constitutional protection that provides freedom from the press. In any era, a political lie always has better legs than truth. Then or now, curated fact or information is often the real news.

Governments leak to spin the gullible. Apparatchiks call it chicken feed. Journalists pick through the leaks for salacious bits, whilst historians and academics are left to cook the official books. Journalism isn’t the first draft of history so much as it is a kind of rhetorical litter, the compost that fuels urban miasma and plantation politics. The largest American newspapers are liberal urban broadsheets serving Gothic swamps where votes and loyalty are bought with tax handouts; rehab, parole, food stamps, food banks, blood banks, condoms, weed, methadone, needle exchanges, contraceptives, abortions, assisted suicides, and all the associated trappings of no-fault dystopia. In America, major cities are controlled by a single political party. In Washington DC alone, well north of 80% of the population votes for and underwrites the Democrat Party.

When federal partisans, cops, and lawyers especially come to the workplace, they do not leave their politics at home. Non-partisan caveats are usually fake news. Recent disclosures about the Hillary Clinton email and Russian tampering investigations are probative. Electronic evidence suggests that the 7th floor of the FBI is a sweet and sour pork buffet. James Comey, Andrew McCabe, Peter Strzok, Lisa Page, Robert Mueller, Sally Yates, Dana Boente, and Rod Rosenstein and even Barack Obama have been tainted. A dirty or disloyal cop at the top of the Justice Department is not a novelty. 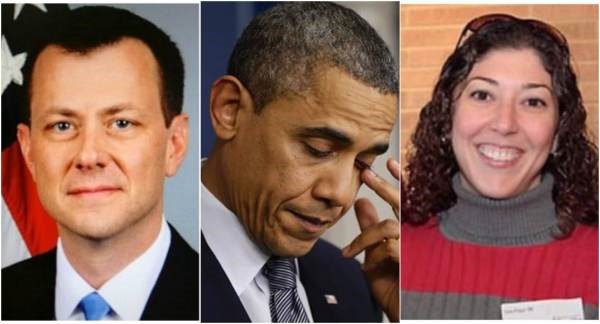 Peter and Lisa are still scheming at tax payer expense. There was a time any federal agent would lose badge and gun for flagrant political partisanship—or workplace adultery. Apparently, the FBI is getting a new headquarters just to accommodate lower standards for its low life.

All the while, hapless, if not fractured Republicans, control the levers of power but apparently not the ship of state. Trump probably has as many enemies on the ideological right as he does on the loopy left. Anti-Trump obstruction seems to be the only truly bi-partisan movement in the public square. As a mercantile pragmatist, Trump is something new in Washington, neither fish nor fowl. Neophobes and establishment castrati hate most what they understand least. Elite paranoia is now aggravated by fear of Trump, fear of change, and fear of history.

Fear of history might be the most consequential. The uncivil war now raging inside the Beltway is again exposing an ugly national security state, tenured tyrants that fly under several false flags: banners like objective, impartial, not-for-profit, non-partisan, or competent. None of these virtues attributed to incumbent civil or foreign services and the deep state are supported by the historical record or recent events. Bellwether historical milestones provide an anthology of national security malaise.

There is no compelling evidence to suggest that bigger is better if the mission is strategic warning or Intelligence analysis. The most consistent product produced by the national security community today is wishful thinking.

Flash forward to 2016 when a an unprecedented cabal of federal judges, FBI agents, Justice Department lawyers, and Intelligence Community satraps came out of the shadows to: cook the polls, cook the primaries, fix an election, and then when none of that worked, undo results not to their liking. The cast of deep state creeps in the anti-Trump election tampering coalition, before and after the 2016 election, now include: a Director of National Intelligence, a Director of NSA, two Directors of CIA, a deputy Director of CIA, at least two Directors of the FBI, and at least three federal judges.

If three sclerotic federal judges couldn’t smell a rat in all those election year warrant applications to surveil only team Trump, then those jurists are either corrupt, partisan, or senile—maybe all three. Withal, the FISA “court” at the Justice department has revealed itself to be a secret star chamber, a lethal partisan tool for Democrats and an embarrassment to an American legal “profession” that has little credibility to lose. The role of lawyers and dirty federal cops in the failed dump-Trump campaign validates a host of ugly stereotypes about shysters.

Former President Barak Obama may have played a passive aggressive, yet culpable, role in the 2016 sedition too, breathing new life into the “crooked Hillary” and “lock her up” memes.  Starting with the Clinton/State Department “secret server” whitewash, probative emails across the federal spectrum still disappear like snowflakes whilst seditious anti-Trump “dossiers,” memos, and emails continue to drop weekly from several federal privies.

All the while, corrupt Intelligence officers and dirty federal cops are aided and abetted by a servile and an uncurious American press. With republican democracy itself at risk, the creep state inside the Beltway has become a dangerous joke. Unfortunately, democracy in peril is no laughing matter. Vladimir Putin and the Russian intelligence services have no need to assault American elections or American democracy.

Hostiles are already inside the wire and they’re all homegrown. If Watergate was wrought by second rate burglars, Trump hate is underwritten by much worse; first rate felons and world class traitors. In three or seven years, Trump will be back in New York while the deep state will still be with us.

PrevAppalachian Still Life and Each
The Trojan Horse and HomeNext