Tell Mama Lies: How to Lie About Islamophobia 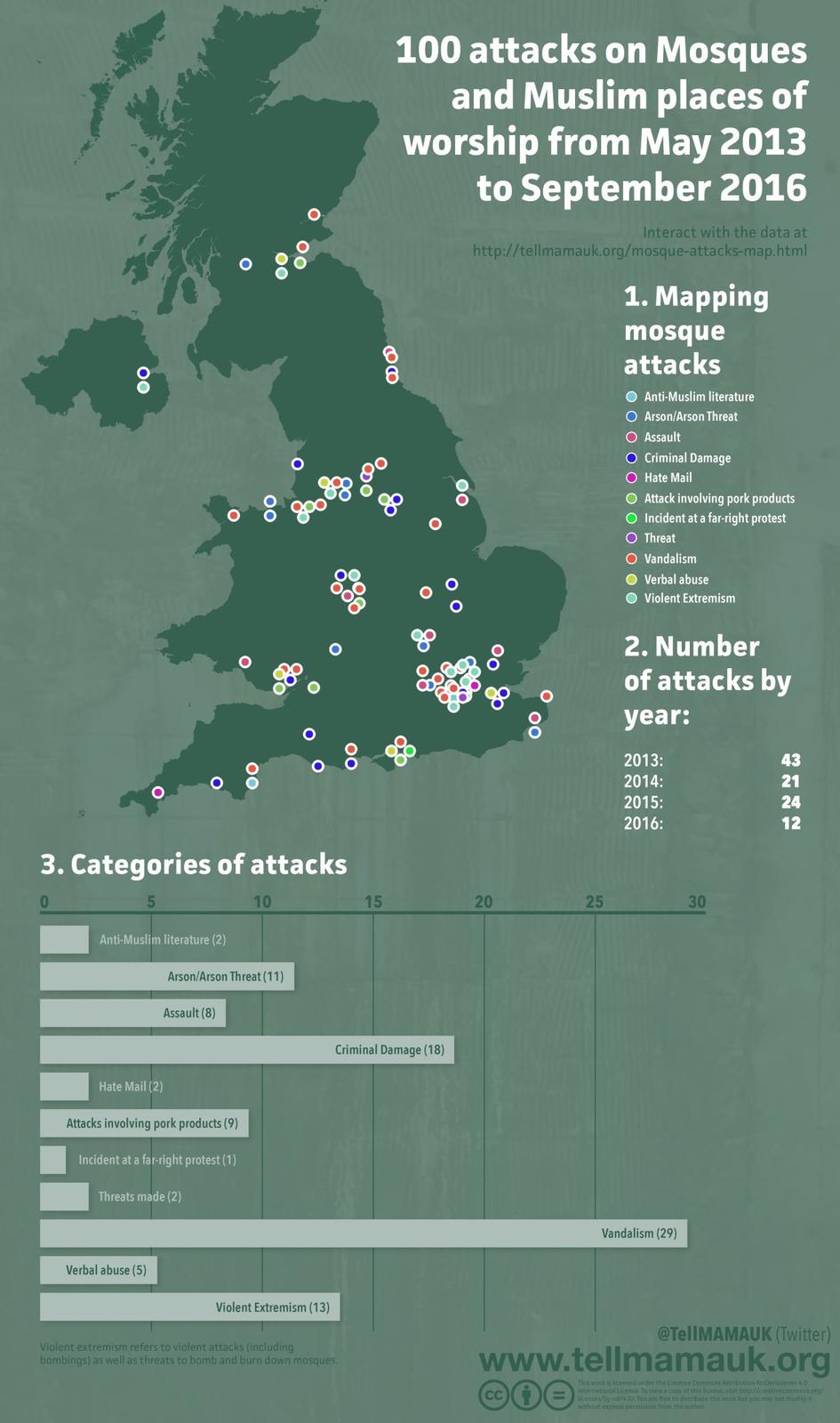 Although the image/representation above is from the largest “anti-Islamophobia” organisation in the United Kingdom, American readers will be well aware that similar organisations and individuals exist in the United States (e.g., CAIR, Nathan Lean, the Southern Poverty Law Center, Georgetown University, Loonwatch and many more). And, like Tell Mama, they too indulge in obfuscation, dissemblance and ambiguity. Indeed many happily lie for the cause of Islam.

The British organisation is called Tell Mama. This is how it sells itself:

The image above, quite simply, is an outrageous use of numbers and charts. I know that left-wing political academics love their charts, percentage and stats and do this kind of thing all the time (i.e., in order to sell a political cause); but the details in the Tell Mama image are pathetic. (The image above is taken from the Tell Mama website. It can be found here.)

We must ask two other questions. Of the “100 attacks on mosques and Muslim places of worship,” how many were reported to the police? How many resulted in convictions?

That means that at least some – or many – of the reports to Tell Mama (as facilitated by its convenient ‘Submit a report’ section) might have been, at best, exaggerations, and, at worst, lies.

Finally, note also that on the map of the UK above there are some coloured circles on the top of different coloured circles. This may hint at the fact that the same “attack” has been counted twice. After all, even though the circles only half-cover the circles below them, that needs to be the case because the viewer wouldn’t realise that there had been two attacks if one circle were completely covered by another. Thus both circles may cover exactly the same geographical place because they’re different symbolisations of the very same attack under two different categorisations.

Let’s just take one example from the map.

In addition, the categorisations of most of the attacks are perverse. So let’s go through them one at a time.

Note firstly the fact that arson and the threat of arson are cleverly fused together here. Arson, to state the obvious, is massively different from the threat of arson. Indeed, for all we know, the proportion of threats of arson to actual arson could be something like 1000 to 1. That is, 1000 threats to every actual act of arson. The truth is that actual acts of arson (in the UK) have been extremely rare; compared to, say, the burning down of churches or Hindu temples in Pakistan. (Mughal is of Pakistani heritage.)

Here again Tell Mama trades on ambiguity. After all, there’s such a thing as verbal assault and acts of physical assault are classified as “physical assault.” This leads me to conclude that perhaps all these “assaults” were verbal in nature. It doesn’t stop there. What form did these verbal assaults take? It could be something like this: “Muhammed was a beheader of hundreds of Jews and other kuffar.” (A true historical claim.) Or: “Why do ‘moderate Muslims’ very rarely deal with their own extremists?”

Is arson “criminal damage”? If it is, then it could quite easily be the case that Tell Mama is counting the very same attack twice (i.e., under two headings). Once as “arson” and again as “criminal damage.”

This doesn’t even deserve a response. (Is this something from Monty Python?)

7) “Incident at a far-right protest”

This is even more vague – and intentionally vague! (It also sounds like a BBC play.) The Tell Mama’s image/visual is meant to be about attacks on mosques. How does an incident at a far-right protest connect with “attacks on mosque”? I suppose an attack on a mosque could have happened during a protest. But then Tell Mama would have given that a separate category. In addition, what is meant by the word “incident”? Did someone fart outside a mosque or something?

Vagueness again. Anything can be classed as a “threat.” It doesn’t even need to be a threat of violence because, again, if it had been, Tell Mama would have classified it under a different heading. As it is, someone can threaten to burn the Koran. Sure, someone can also threatened to kill a Muslim. But, like the “Arson/arson threat” earlier, threats to kill occur all the time on Facebook (often from Muslims) and even on the street. And, again like arson, threats to kill will outnumber actual killings by thousands to one… or more!

Just as Tell Mama may have fused “hate mail” with “anti-Muslim literature,” so here it appears to have also fused “vandalism” with “criminal damage”; which itself may well have been fused with “arson”! Fiyaz Mughal is simply replicating the various categorisations of assaults in order to make things look a lot worse than they actually are. (As he did by going back to 2013, rather than 2014, in his survey of “attacks.”)

Luckily, Tell Mama’s image does furnish us with an explanation of this category. It goes as follows:

“Violent extremism refers to violent attacks (including bombings) as well as threats to bomb and burn down mosques.”

“Bombings”? Come again? How many bombings have there actually been of mosques in the UK? None! Perhaps Fiyaz Mughal is getting pork attacks mixed up with bombings. This fusion and replication of categories is really beginning to annoy me. Thus we now have “violent extremism,” which may include “threats to burn down mosques” (which already has its own category). And, as I’ve already said, for every 1000 threats (or more) there is one act of arson/physical abuse. And my figures are underestimates!

Despite the deliberate vagueness and ambiguity throughout Tell Mama’s list/image, I’m still pretty sure than Fiyaz Mughal will be aware of the legal definitions of some – or all – of his categories. Indeed I also suspect that he might have had the help of a lawyer; as well as assistance from Leftist academics (such as the hate-filled Nathan Lean, who’s on the Advisory Board of Tell Mama).

That wouldn’t surprise anyone. Lawyers aren’t only concerned with written and spoken clarity. They’re also concerned with political causes and winning cases. Thus, a left-wing lawyer would be happy to indulge in what people call “lawfare” (as Tell Mama itself is). Indeed progressive/socialist lawyers are taking part in acts of lawfare all the time. That means that a large part of today’s legal profession is tailor-made to further the political aims and causes of organisations like Fiyaz Mughal’s Tell Mama.

If you have enjoyed this article and want to read more by Paul Austin Murphy, please click here.