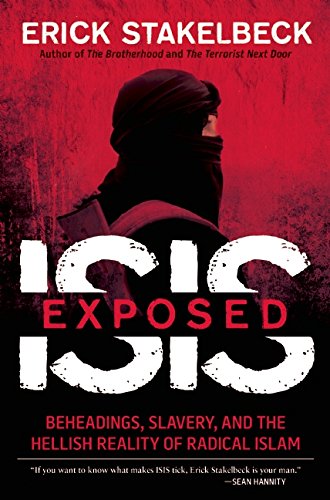 A Northeast Philadelphia high school and college basketball star, budding sportswriter Erick Stakelbeck was transformed by his 9/11 experience in Manhattan to become one of America’s acclaimed experts on Islamic terrorism. His weekly The Watchman programs on CBN, appearances on FoxNews, columns in world media and his two previous books The Terrorist Next Door; How the Government is Deceiving You About the Islamist Threat, and The Brotherhood: America’s Next Great Enemy have kept  Americans and an international  following abreast of the growing menace of Islamic terrorism now roiling the West and destabilizing the Middle East. A Middle East quickly devolving in a titanic clash among opposing apocalyptic Islamic end-times visions. One is Iran’s Mahdist Shia cult on the verge of becoming a nuclear threshold hegemon. Another is the alleged ‘reformist” Saudi Wahhabist Sunni doctrine. Confronting both is the highly visible ascent of the Sunni Salafist Islamic State (IS), formerly ISIS. Written in the genre of a page-turning thriller, Stakelbeck’s latest in his burgeoning trilogy on Islamic terrorism, ISIS Exposed:  Beheadings, Slavery, and The hellish reality of Radical Islam is a compact, yet telling guide to the brutal ideology behind the sudden eruption and expansion of the Islamic State (IS), a self-declared Caliphate. Among questions addressed in Stakelbeck’s ISIS Exposed are:

Tens of thousands of young Muslims across the ummah from Minneapolis in the US, the UK, France, Germany, Russia and even China have been drawn like bees to the holy beehive of the self-declared Caliphate which espouses Islamic purification through ethnic and religious cleansing. IS is a throwback to the sacralized barbarity of Mohammed and his companions, the future caliphs, during the early days of the grand jihad of Islam – a jihad that swept the world in just a few centuries after Islam erupted on the scene over millennia ago leaving a trail of beheadings, immolations, crucifixions and enslavement of women and children as war booty.  ISIS emblazons those contemporary acts of purification using social media like Twitter and Instagram along with slick on-line webzines and high production value videos to attract thousands of foreign Muslims to serve the self-declared Caliphate which occupies a conquered swath of land in Iraq and Syria nearly the size of Great Britain. A Caliphate, not unlike the earlier Caliphates which were created from conquered Christian, Zoroastrian, Hindu and Buddhist realms, from North Africa through the Middle East to South Asia.

In chapter seven, “Amsterdamned: ISIS over Europe,” Stakelbeck reveals the impact of mass Muslim immigration policies in the significant growth of Muslim émigrés communities that have not accepted nor integrated in EU countries. He notes how lax border policies in the EU and 26 Shengen countries have created a veritable jihad highway drawing thousands from across European Muslim communities to travel to Turkey and ultimately join the Islamic State. He warns that a number of those returning Euro-Salafist jihadists could enter the US through the visa waiver program making what he calls “an unpleasant little pit stop in New York City or Chicago.” He refers to the efforts of Geert Wilders’ Freedom Party in The Netherlands and others in France, Denmark and the UK seeking to put a stop to Muslim mass immigration and denial of citizenship to returning homegrown jihadists. Stakelbeck cites the backlash against the Islamic State in street clashes involving Kurdish opponents of the Islamic State and demonstrations by the Patriotic Europeans Against Islamization of the West (PEGIDA) which holds weekly rallies in Dresden and other German and European cities. He notes the 300 ISIS supporters currently facing trial in Germany and contrasts that with the Danish treatment of ISIS fighters – myopically continuing to pay their welfare benefits while they are off fighting in Syria. In Aarhus, Denmark, returning ISIS vets are given psychological counseling and both job and school or university placements. All while the local mosque backs the Islamic State by refusing to criticize it. Stakelbeck suggests that Danish political correctness must be appreciated by the 30 Aarhus ISIS fighters in Syria and Iraq.

Stakelbeck reviews the problematic lack of appropriate identification of the ISIS threat by the Obama Administration, reflected in the recent Countering Islamic Extremism Summit in February 2015. He also cites the New Year’s speech by Egyptian President al–Sisi before Muslim clerics and scholars exhorting them to reform Qur’anic doctrine that provides the basis for the Salafist doctrine of ISIS. Unfortunately, the Administration myopically persists in resorting to consulting Muslim Brotherhood and Salafist scholars from Egypt in the vain hopes of deriving messaging to combat what it deems “extremist criminal activities,” not reflective of core Islamic values.

Stakelbeck’s book went to press before the eruption of tumultuous events in late March 2015. There was outbreak of a virtual political war by the Administration against Israel following the March 17, 2015 elections overwhelmingly won by Prime Minister Netanyahu. The Administration severely criticized Netanyahu for his address before a joint meeting of Congress on March 3rd conveying the message that the nuclear agreement with Iran was “a very bad deal.” There was the sudden attack by Saudi and Gulf Emirate allies on Iranian- supported Houthi rebels in the failed state of Yemen who were extending the regional hegemony of Iran across four Arab capitals in the Levant. The Administration found itself caught between support of Iranian Quds Force led Shia militias in Iraq while trying to distance itself. Then there is the appeasing accommodation of Iran’s nuclear objectives with the P5+1  in looming political agreements scheduled for conclusion on March 31st.  Stakelbeck on a Fox and Friends segment about these developments on March 27, 2015 suggested that “the leader of the free world, had abdicated his responsibilities.” Lost in all this is what to do about ISIS. Nevertheless, Stakelbeck’s ISIS Exposed provides a warning brief for compelling action to destroy the Caliphate Triumphant.

PrevReligious Indoctrination and the Creation of Terrorists
Bam vs. BibiNext