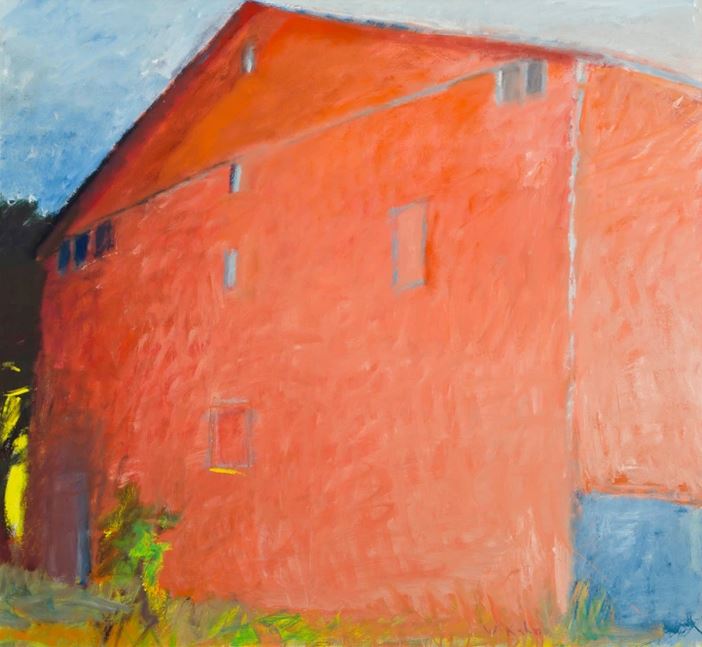 When I was eleven years old we lived on a farm only twenty miles from London, which meant my ‘townie’ relations could easily visit, driving up in their Ford Prefects or Humber Hawks, to drop in unannounced; especially on Summer Sundays, when my father’s garden was producing its enormous crop of spring onions, tomatoes, radishes, beetroot and lettuce.

One balmy August Sunday, Ernie, Ruby, Elsie, Walt—the whole gang—descended. The tea table groaned with victuals, and everyone’s digestive systems groaned too. No one could face the enormous fruit cake my mother had baked. My father suggested a walk around the fields to aid digestion.

We put down our tea cups and put on our boots and my father led us out through the farm gate, past the fields he had himself harvested with the farm’s clapped out old Massey Ferguson Combine Harvester, along hawthorn hedgerows down the lane.

It was the most beautiful early evening. The sun had not set, the air was warm and perfumed with newly cut corn stubble. Linnets twittered and swallows swooped. My father mentioned this or that crop: barley here, wheat there. That field had been infested with wild oats.

“Why were they wild George?” quipped Auntie Elsie. “Did you say something to upset them?”

We ambled along the northernmost field by the brook, which was reduced to a mere trickle after the long hot Summer, then we turned south up the gently rising lane towards a neighbouring farm. This was a stud farm, so the fields weren’t planted for cereal crops, but grass paddocks for the horses.

At the top of the lane, at the crest of the rise, stood a large barn, silhouetted against the pink and lilac sky. Also silhouetted was what I took to be a young woman, or a girl, I couldn’t quite make out against the light, trying to open the barn door. I could see she was finding it quite difficult, because she had both arms stretched out stiff for maximum purchase, so that she could give the barn door a good strong tug. I saw her do it two or three times, but she couldn’t get the barn door to open. It must have been stuck.

My uncles and aunts were talking about mileage and what the A roads had been like on their journey over, and next time they might try the B31, which was a nice, quiet, leafy run, but of course the last petrol station was just off the A12, and they had driven that way a couple of weeks ago and there had been a big traffic jam and … yadder yadder.

I was much more interested in the young woman trying to open the barn door. It was definitely a woman. I could clearly see her long dark hair flicking back and forth as she pulled at the door. It was obviously very important to get that barn door open. I wondered what the urgency was. No one in our party of post-prandial promenaders had noticed the woman or her plight. But she wasn’t calling out or making a noise. She was completely silent.

Our group continued up the hill.

I couldn’t take my eyes off the woman because there was clearly something very wrong. She was wrenching at the barn door frantically. I could see her long hair flying back and forth around her head, which shook with her violent efforts to pull open the door. Her whole body shuddered, her arms straight out and rigid. She yanked and pulled and tugged and wrenched, and I became alarmed because it looked like a very serious situation, and she probably needed help in getting that barn door open. Why was no one saying anything about it? Could no one else see what was going on?

Still we ambled. I’ve completely forgotten what the conversation had turned to. It had turned off the A12, but hadn’t turned onto the woman. She hadn’t even been noticed let alone mentioned. She was desperate now. I could see. Out of control. Frenzied. Consumed with effort. Wrenching, pulling, tugging. She would tear the whole barn down in a moment, I thought, such sheer determination had seized her.

And then she began to relax. She was still gripping the barn door but she was quietening down. Exhausted, maybe. Gentler and gentler became her efforts until she was hardly moving at all. Defeated. Despondent. He hair stopped flying. Her head became steady. She stood still, her stiff, outstretched arms still clutching the barn door.

As our group approached the barn the woman’s hair shrank away. Her head shrank away and coalesced with her body, and her body became smooth and fixed, like a big, wooden fence post.

And then she became a fence post, with a horizontal cross rail attached to the barn. There wasn’t even a door. The door to the barn was on the other side. I gawped in amazement.

The heat of the late afternoon; the shimmering haze; squinting into the light; not knowing that lane or that farm or that barn; the tedious conversation; everything had conspired to stimulate my imagination into playing a little trick with me: a dramatic hallucination. “It’s me, Cathy. Let me in. Let me in at your barn door … ” well, Wuthering Heights was one of our set books at school. I imagine that’s where the imagery came from.

Once our group was past the barn, we squeezed through a gap in the hedge and strolled down the hill back to our farm and our house and the fruit cake, which would also vanish like the lady, except that it would be delicious and not at all illusory.