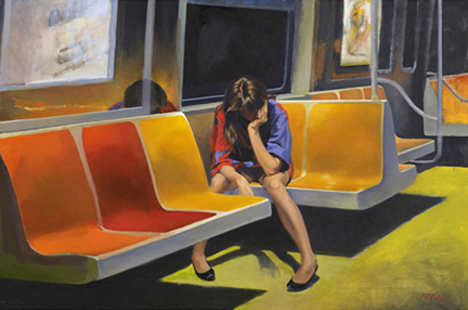 I, too, cannot live

grants me the light

I, too, cannot love

the vision of beauty

and conjured from its shock

the ashes of future delights.

I, too, cannot die

Wisdom, in its virginity,

traces the arc of passion’s fall,

that for a time

that also once knew height.

that grows false in us

chains the oracle as its prey,

and so freedom ever recedes from you,

still yet one more renunciation away.

Looking out from the train

as it crosses the Han River,

cars slow down as traffic thickens

under a gray summer sky,

a mist of rain glazing the window.

I thought of the crueler nostalgia—

not for the experiences one has lived through

or for the fruit plucked from the past

that now ripens and ferments in the memory,

but for hopes one was able to entertain,

for the futures one could still imagine:

the illusions that kept us aloft and airborne.

The wings sutured across the backs

of our thoughts enabled them

to be swept up into the mind of the wind.

But a drop of blood from the wounds of ascent

marked the sacrifice of a desire

to the star of its fulfillment,

hovering for a brief moment

above the stain of its vanity, as mortal

and as earthbound as the scar

that is our sole and constant possession.

You hover there, suspended in pale light,

As your crown sways in the billows

From the storm that gives out

At the ceiling of your world.

Above you looms the realm of the dead,

Where shadows grow heavy with smoke,

While below you, the currents struggle

To sweep all that dives onto the summits of drought.

But you persist in your station,

To the midpoint of a renunciation.

There is no wreckage to stir your appetite

On the bright and lifeless floor of your sea.

It is tempting to scavenge memories

Of carrion—a tattered fin, a shard of shell,

And the eye’s solitary seed—and turn

The decay of mirages into the gifts of dread.

But you cast your eye beyond wishes,

Release from your grip the first lure fastened

On the wire that winds out of the abyss.

Though your gaze turns inward

The figment of the void that unspools from your eye

Arrests the glances of passing ghosts.

You tighten the coil between fate and hunger,

And spread your arms into the vessels walled in by hope.

I fade into your camouflage, sleepless, iridescent,

Your spell casts its anchor into the depths

Lit by your serenity, but as I stretch my arm

Toward the chain, my lungs fill with air

Hurtling up into the dust of an unseeing night.

___________________________________
Jo Han is a professor of comparative literature currently living in Seoul, South Korea, where he was born and lived for four years before moving to the United States. His areas of research include science fiction, political theory, and East Asian cinema. He is currently at work on a project exploring the afterlife of the aristocratic in modernity, focusing on the works of Stendhal, Tocqueville, Nietzsche, Flaubert, Proust, Musil, and Houellebecq.