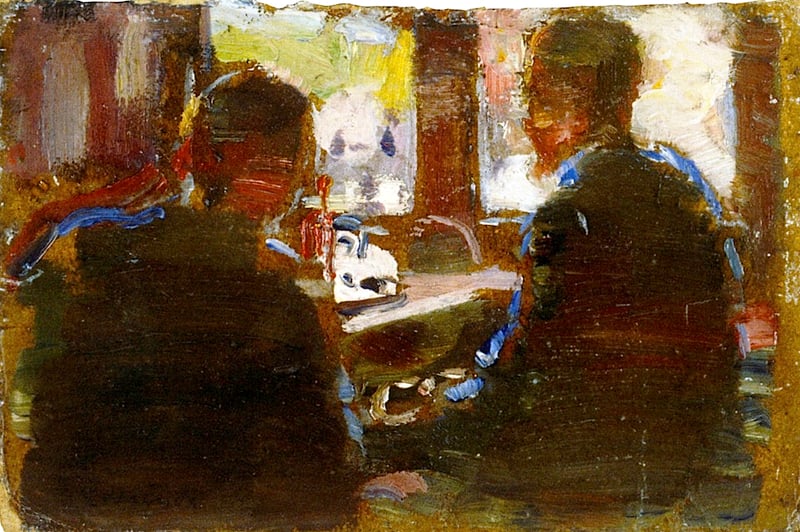 We hear a lot about “the war on men” on social and mainstream media, particularly white, heterosexual males. And there’s been a whole lot of “toxic” talk about masculinity going around over the last few weeks.

I’m sure readers will be familiar by now with the recent bizarre Gillette shaving advert, with the widely perceived message aimed at white men to be less toxic, thus less masculine. And although this naval-gazing publicity stunt is about generalising white men’s negative attitude toward women, it seems the message has nonetheless come across as feminist propaganda, according to many viewers’ comments on YouTube videos.

There’s also scenes of gangs of white bullies chasing a frightened boy, and two white boys engaging in wrestling rough play on the garden lawn, while relaxed black boys sitting down behaving themselves look on. Such slick, anti-White men semiotics are not uncommon in contemporary culture. But what is more disturbing (which I’ll come to later) is the recent considered opinion of the American Psychological Association (APA), which found that teaching a boy to be a man is now deemed harmful for the boy.

As for Gillette and other advertisers: why won’t they quit politicising and preaching their ideologies to people and instead get on with promoting their products (those who are “woke” know why but that’s the subject of another essay)? With such anti-male “toxic” rhetoric forever in the news, one could never imagine Winston Churchill saying the following words during a famous WW2 speech:

. . . Even though large tracts of Europe and many old and famous States have fallen or may fall into the grip of the nasty Gestapo and all the apparatus of Nazi rule, we clean-shaven Britons shall do our utmost best to be tolerant of this brute force. We shall even consider waving the white flag. We shall abandon France, we shall flee from the seas and oceans; while the enemy attacks, we shall make buttered scones and tea, while agreeing with everything superior feminists say without making one compliment about their appearances. Yes, there will be no derriere-gazing, breast-ogling, barbecuing or catcalling at these disinfected venues; any signs of romantic heterosexuality will be quickly flushed down the toilet bowl, with castration being the order of the day; we will act like obedient little eunuchs and keep our mouths shut and not hold the door open for any woman. And we shall lie in the sun on the beaches suntanning our toxic pale bodies, while shaving our legs with Gillette razors; and we shall plant daffodils in the fields and in the streets; we shall run screaming in the hills; we shall surrender for fear of toxic masculinity, and we shall worship our State masters, who love docile, brainwashed, easy-to-control, emotional, neutered clone-zombies; and if, which I do not for a moment believe, this island or a large part of it were subjugated and starving, then our Empire beyond the seas, armed and guarded by the British Fleet, would be ordered to hide in sheltered ports, until, in Gaia’s good time, the New World Order, with all its power and might, steps forth to the rescue and the liberation of those pyjama-wearing, beta-males rattling their chains with joy.

On a more serious note and to return to the APA’s findings: It said it could be damaging to teach boys about “traditional masculinity.” In its recently released report titled, “APA Guidelines for the Psychological Practice with Boys and Men,” the APA said the “traditional masculinity philosophy not only is ‘harmful’ but also could lead to homophobia and sexual harassment.”

What seems to be cited here as problematic are some traits of traditional masculinity, including elements of “anti-femininity, achievement, eschewal of the appearance of weakness, and adventure, risk and violence.”

According to an APA article, the main thrust of the APA’s research is that “traditional masculinity—marked by stoicism, competitiveness, dominance and aggression—is, on the whole, harmful.”

The report also claims such behaviour is “psychologically harmful and that socializing boys to suppress their emotions causes damage that echoes both inwardly and outwardly.” The report states that traditional masculinity ideology has been shown to limit males’ psychological development, constrain their behaviour, which results in gender role strain and gender role conflict, and negatively influences mental health and physical health.

These findings must be music to the ears of prison officers, CEO fat cats, and politicians. But surely common-sense logic tells us we probably need more young males to be independent risk-takers, who are both stoical and tougher? Softening up and getting in touch with your feelings have no place in a world hell-bent on denying reality and subjugating workers’ rights, and those overburdened with high taxation and low wages, as well as the fear of being physically attacked.

Let’s face it, there is nothing sweeter for the ruling class and corporate fat cats than docile, obedient, passive, cowardly men who remain silent. The Bible tells males, “Act like men, be strong” (1 Corinthians 16: 13-14), while Joshua 1:9 says, “Be strong and courageous. Do not be frightened, and do not be dismayed.”

Furthermore, psychological associations worldwide are invariably secular, which leads to the question: Why is it morally wrong for men to be “toxic” toward women? According to whose subjective opinion is it wrong? In a godless world void of objective moral values or duties, why, or how, can any man improve his morality if freedom of the will is non-existent? According to Darwinism, “toxic” alpha-male behaviour toward women is advantageous in survival of the fittest.

The APA condemns masculinity inasmuch as it “can lead to homophobia and sexual harassment.” The truth is, masculinity does not lead to harassment, the proof being that the overwhelming majority of our fathers and grandfathers, as well as most men today, have gone through their lives acting as gentlemen and have not engaged in rape or physical intimidation.

Rabbi Aryeh Spero wrote in American Thinker: “The vast majority of men have not used their physical power or their energy and testosterone to savage women. Those wishing, from the get-go, to degrade historic masculinity will enlarge, expand, and redefine the definition of sexual harassment so that many men not really guilty of harassment will be charged as harassers.”

Don’t be fooled by the “toxic” qualifier—all masculinity is toxic to these human weebles. What they call “toxic” is really the essence of freedom. It’s toxic all right, but to their goals, not ours. Masculinity means freedom from them and the puffy, non-binary utopia they dreamed up because that’s the only world in which such losers could be anything more than a sorry punchline. It’s a War on Testosterone, and we’re culturally surrounded.

In all my years on this planet, I’ve yet to see an epidemic of men sexually harassing women. In my experience, normal men and women get on quite well and love each other’s company, despite their occasional trivial arguments. My mother, who lived through WW2, told me that men back then (and now) treated women like goddesses and, to this day, she rarely recalled any bad behaviour by the “toxic” creatures that contemporary men-haters complain of. That’s not denying that some men (and women) are obnoxious toward one another. We live in a fallen world.

Read More in New English Review:
When the Woke Reawaken
The Perfect Story of the Perfect Father
Trump Twice?

In his forthcoming book, Epiphanies: How We Got Wise to the Doublethink of Feminism, the Irish author John Waters writes about relationships between the sexes in Ireland:

I don’t think I really ever bought into the feminist version of reality, although for a time well into my 30s, I have to admit, I may have given the impression that I was on board. The idea of male oppression of women—in Ireland, where I had lived all my life, or any other Western country—was so far removed from the reality of my experience and my observations, that it was never really possible for me to see all this feminist agitation and complaining as anything other than a faintly amusing game. But there is a difference between reality and culture, and sometimes only great pain or difficulty enables one to bridge the gap.

He said he had grown up surrounded by women, his mother, aunts, three sisters, neighbours, teachers, nuns, nurses—all of them fully formed individuals who had made a go of their own lives and borne witness to their own outlooks on society.

Any of them would have been contemptuous of the idea that they were somehow under the heel of men. Sure, many of them had tough lives, rearing their families and struggling to get by in hard times. But their husbands had tough lives also, and these women knew it better than anyone. In no sense whatever did my father or any other man I ever came across as a child look down upon women or treat them as in any respect inferior. Such men regarded women differently to the way they regarded other men—which is to say that they treated them with an exalted respect.

And what about the existence of toxic gender Feminiism (not to be confused with the laudable equity feminism)? Gender Feminists believe traditional female and male sex roles are invented by men to oppress women. However, a 2006 study published in the UK’s Sunday Times found that women appear to be the main opponents of the advancement of women. The study found that “female rivalry in the workplace may sometimes be as important as sexism in holding back women’s careers.” According to the study in the Times’ article:

Forget “jobs for the boys,” Women bosses are significantly more likely than men to discriminate against female employees, research has suggested. The study found that when presented with applications for promotion, women were more likely than men to assess the female candidate as less qualified than the male one. They were also prone to mark down women’s prospects for promotion and to assess them as more controlling than men in their management style.

It seems toxicity is alive and well in some female managerial positions, discriminating against other women, “possibly because they like to be the only female manager or woman in the workplace.” Does this not look like toxic femininity?

As for toxic masculinity, there is a name for any man who unjustly demeans or sexually harasses a good woman: A creep. And what is really toxic in today’s culture are the godless social engineers who shake their fists at a divine entity they don’t believe in, while proclaiming: “We will make man in our image and our image only!”

I’ll leave the last words on the Gillette advert to writer/podcaster Stefan Molyneux, who says: “Like all good propaganda . . . The ethnic demographics spell a very, very clear story. It’s horrible, it’s horrendous and it implies of course that white Christian Europeans are the ones who have the most to learn from blacks and Middle-Eastern cultures about how best to treat their women.”