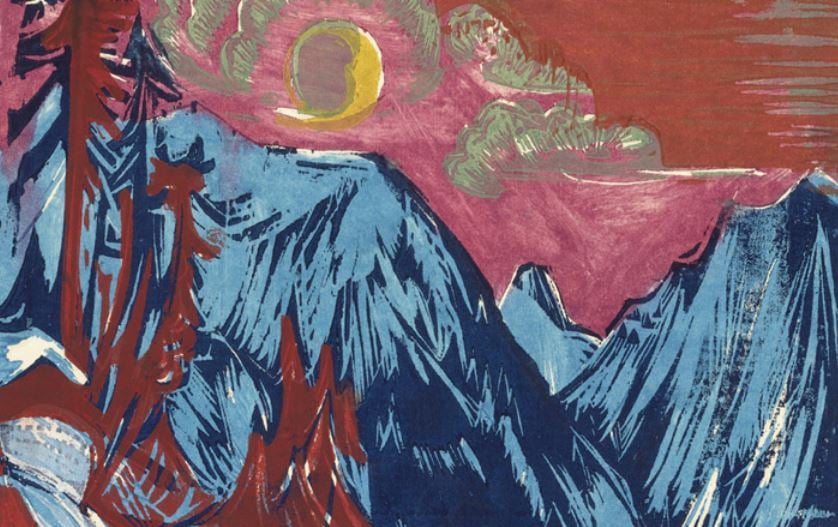 Sestina: For a Lovely Ghost

A woman I cared for believed in ghosts.

She said: ‘they haunt my daughter’s house

and trouble the stairway landing at night.

And they glow. They come and they go. They murmur late.’

And when she told me this I nodded: ‘Yes, I know,

it must be troubling for you to visit there.’

I wondered aloud if, next time she was there,

the sinews and bones of a living house,

the purple hauntings that keep us worried late,

all the half-considered vagaries of the night.

If I were with her now, vigilant all night,

I would help her find the glow she sees there,

as I see her now, watching, lingering late,

hoping, in her stealth, to trap her ghosts

and force an account of their doings in the house.

But this woman I would never really know,

glowed from a source I couldn’t know,

and now, though I try to stem the intrusions of the night,

and keep the spirit-glow outside my house,

sealing all the cracks I see there,

choosing doors that can’t be forced by ghosts,

her ghost still comes, whispering out of sight and late.

I’ve known other hauntings too, not all of them late

or dark, but with causes no less hard to know,

all native to my heart, my soul’s proper ghosts.

They chatter, sometimes all night,

and gather round my bed, loitering there,

trying to evict me from my house.

She glowed, a ghost in her daughter’s house,

glowed, I say, as when we lingered, hands caressing late,

fingers exploring fingers, each wanting something there,

something for each, wanting to know

the evanescent thing that would vindicate the night

and, in one grand gesture, frighten off the ghosts.

But ghosts teach their lessons late at night:

she is sleeping there now, aglow, and in my house,

that she is not here is all there is to know.

What There Is at Night

Don’t tell me this and that about the world.

I’ve heard it all before: the battles, the doubts,

the plangent bells, the rosy glow of intimation that

took you from your errant path and

set you back on course.

Tell me instead what you see in the dark,

when shadows appear of things out of sight.

Show me now what there is at night

when you walk the meadow and your

are all there is to hear.

Tell me how you

feel inside when high clouds

dim the faint quarter-moon and it

fades from sight. I want to know

what there is at night.

What do you see below the surface of the lake?

At one hundred feet, do the fish

rest their tired eyes and feel a

Some tell of heights that churn the gut and

tighten the heart. But is it really so?

Do you know of maps that

And tell me how that heart still beats

when there is no moon and

stars are the only light.

I want to know what there is at night.

when the baker and his wife

are still asleep. But have you heard the

dough rise in the quiet of their shop?

You know all other hearts asleep tonight.

Can you hear the one that beats

in time with mine? And in between

each beat, is there (as some have said)

the deepest silence and the darkest light?

But if I wake you now, you could

lose your sight, and the thing that

I most seek would simply dissipate

in a sickly light.

I must find out what there is at night.

PrevThe Returnees
The World According to Stan (Part III)Next