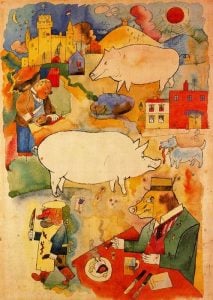 This is a true story of two pigs, and although they say that sometimes fiction is truer than fact, this time it is true. It was told me by a well-traveled old mariner who enjoyed watching reruns of movies about Wakanda and other scientific facts.

You are probably wondering why Malarky and Otherpig were standing on Platform 14 of Victoria Station. If they had been attracted to sunsets, then Waterloo would have been their chosen spot, and to be sure neither stood there for the indulgence of their train-spotting hobby. In fact, they had come up to the city for a cut-price weekend break, away from their duties on a farm near Willingdon in Sussex. They had managed to get permission from the Lizard men; and they were truly grateful for the mini vacation. It wasn’t often they got to enjoy the special rewards of visiting Victoria Station.

And you needn’t bother to ask why the pigs were standing on two legs, rather than four. That is a part of history that should not be discussed. It happened a long time ago, anyway. Their preferred pronouns? They cared not for these, since the pork-raising industry had ground such nonsense out of them. And before you ask, yes, they were both melanin adjusted in compliance with all reasonable demands.

Both Malarky and Otherpig had recently finished reading a slightly simplified Russian novel called ‘Anna Jumps Under a Moving Train.’ They had come across it in the local Willingdon library on the shelf marked ‘permitted stuff to read’ which had the imprimatur of the local dorsey and others. By the way, the Willingdon Library was a distinguished branch of the famous National Library of Permitted Stuff. This was headquartered up in London, on Euston Road, NW1, next to the domed building that has some vertical pointy bits, and around the corner from the headquarters of a charitable organization named ‘Resentment Studies and Narzissmus der kleinen Differenzen.’ As you may know, that was once headed by a socialist megalomaniac long since buried at Highgate Cemetery.

The two pigs had jumped at the chance to catch up on literature which they couldn’t fully understand. They had also learned to enjoy in very much simplified Pig-English a set of short stories by the Japanese author of stories that weren’t written for children, but sometimes were about them. They especially liked the one in which two Osaka office workers were waiting for the 5:15 Hanshin Express to Nishinomiya. That didn’t end well. But they liked the story.

Incidentally, Malarky, despite having forgotten his trilby hat on the train could easily be recognized by the dorsey he sported on his chin. This, together with the ear and nose rings and the eye-catching neckerchief gave him a raffish air. He enjoyed the compliments of strangers on a train, especially on the rare outings away from his farm duties. He secretly maintained that his status was greatly enhanced by the facial decorations since it made him look somewhat like a famous internet entrepreneur whose portrait graced many farm buildings and other places where animals and others congregated.

Otherpig had a real name. It could have been Lil or Bill or Harris or Nancy. I don’t know. But Otherpig had decided to become anonymous since at that time it didn’t matter what farmyard you belonged to – you could still be cancelled. He had transitioned several times in order to hide from the Lizard men. Of course, they knew his true identity anyway; you can depend on it.

Once, he had entered a swimming competition for ‘sows only’ under his most recent inclination. You would have thought he could win easily since he had been baptized a boar. But the honors went to a giant tusker who was pretending to be a sow even more cleverly than Otherpig. In fact, most of the competitors were by this time boars, since only a few of the female pigs had the temerity to compete. And things were changing: in one highly publicized ‘swim meet’ held at an Olympic Size pool near Dallas, Texas all the female swimmers were male pigs who thought they weren’t. I am not making this up.

Malarky later tried his luck on a duckpond near Willingdon and came out marginally ahead of the goslings, not one of whom had yet chosen any of the genders then on offer.

You are probably also asking yourself whether either of these two, standing as they were on platform 14 were wearing face masks. I will be the first to admit that I don’t know for sure. Probably they were ‘kind of’ wearing them. Like a lot of animals and some humans of that time they had been confused by the rulings of the Lizard men and some Brandon supporters.

Were other famous animals or humans on the platform or nearby? Yes. They included a Swedish actress with piggy tails, an American senator (and Nobel laureate) who habitually donned a snowman suit to hide his real identity, and Yukio Mishima, the Japanese author, who was scribbling away in the recently refurbished Platform 14 buffet, surrounded by three mice who had been blinded. No hybrid spiders were in evidence. But these and other creations are for other stories and other times.

Outside the Italianate facade of this once great terminus, marble horse troughs abounded. They had been put there about four hundred years previously by a philanthropic society whose goal was the betterment of the many working horses that once formed part of the transport infrastructure of the metropolis. Now, of course, they were filled with used syringes and empty beer cans and other ‘testimony of summer nights.’ And they were excellent hiding places for Lizard men who kept an eye on things, as they used to say.

Now, unnoticed by the two pigs, a strange bird-shaped chicken (Ok, I’ll come clean; it was a rooster named Mo) was pecking around on platform 14, a few steps behind them. He was in cahoots with a brace of chicken accomplices whose faces were completely hidden behind black masks that they had picked up at an Oxford Street Cut-Price Emporium. Our two piggy friends were so involved in discussing the details of ‘Anna Jumps Under a Moving Train,’ that they did not notice them. And anyway, they might not have recognized Mo since he wore a face mask over his beak. That was deemed really necessary since Chinese Chicken Covid was rampant that year. Initially only birds of the poultry persuasion were compelled to wear such fetching facial attire. Later, just about everyone except the governor of California and his auntie and some high-ranking Davosines had to comply. So Malarky and Otherpig did not notice until it was too late.

Mo struck. He beaked them, through his mask, and they were pitched right over in front of the 5:15 (change at Clapham Junction).

They had linked trotters, so there was no danger they would die separately. One fell and pulled the other down. They were fortunate since the wheels of the train sliced cleanly through their necks which had straddled the rail very precisely. The heads plopped off onto the gravelly bit between the cross ties: one, two, just like that! One of Malarky’s nose rings tinkled against a galvanized splice bar.

You might think that the waiting passengers would be aghast. Not a bit of it. They were deeply appreciative of the train driver’s skill in performing such a neat task. Actually, I don’t think the driver had much to do with it since the vehicle was on tracks and had a predetermined course, like most of what had happened that day. Only an intervention by Spider Man could have saved the two porkers.

What was the motive for this random act of pushing, I hear you ask? The Oldspeakers were unanimous; no motive could be found, even after exhaustive enquiries.

You may be pleased to know that this story has three possible endings because both pigs had great expectations. They had believed that they were going up in the world, it having been rumored in agricultural circles that a mysterious benefactor would leave them an immense piggybank full of free and permitted stuff.

An alternative ending describes the fact Malarky was really out of his head and fell asleep on the 5:15 homeward journey and only dreamed about the grisly bits. That could be true, but is a rather easy way out of our current dilemma. Whatever the case, it is important always to remember to watch our backs.

A third alternative is that after the heads of the two pigs had been severed by the wheels, the driver put the engine into reverse. You might have thought that this would compound the mess. In fact, times arrow suddenly reversed itself and the heads reattached themselves to the bodies, Malarky’s nose ring went back into the pierced septum and shone brilliantly again. The motion picture continued to rewind itself, and the two animals were back on the platform discussing their favorite story about Anna. And in this version the rooster and his facially covered accomplices were nowhere to be seen. But that might be too much to hope for.