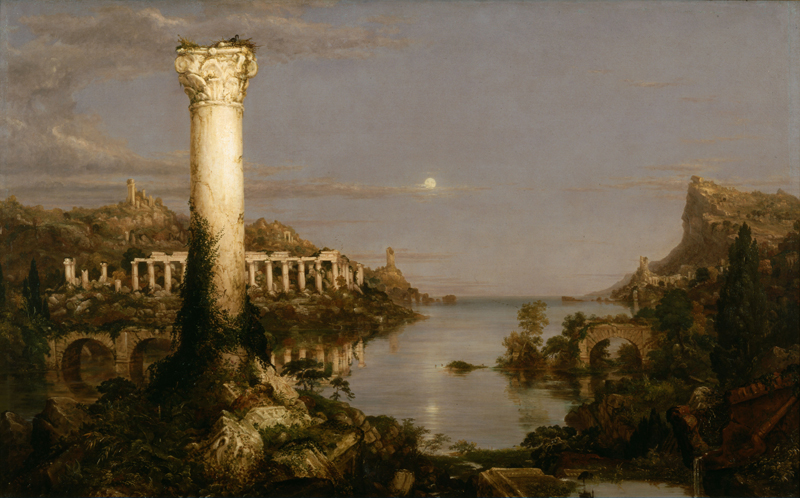 Desolation (The Course of an Empire), Thomas Cole, 1836

Your common or garden neighborhood doomsayer often finds gloomy delight in seeking and finding similarities between or among zoological, historical, or even fictional events or actions. Superficially, such links may not appear to have much in common, but we can impose our own creative analogies where none was thought of, or at least, ne’er so oft express’d. The poetic impulse to analogize the present with the past is found in some modernist poetry intent on reassembling the scattered remnants of broken civilizations, as in, for example, Eliot’s The Waste Land. In like manner, the evocative remnant of the eighth century Anglo-Saxon elegy The Ruin was already looking wistfully back to the once flourishing Roman City of Aquae Sulis (modern day Bath).

calamities crumpled them, these city-sites crashed, the work of giants

corrupted. The roofs have rushed to earth, towers in ruins.

Or take the opinion of George Roux in his classic account of Mesopotamia, Ancient Iraq. This may confirm by analogy with our own times the dedicated pessimist’s view that civilization is fragile.

. . . the desolate mounds which . . . concealed the ruins of Babylon and Nineveh offer perhaps the best lesson in modesty that we shall ever receive from history.

And here is John Evelyn in his diary entry of November, 1644 (perhaps also reflecting on the tragic events in his own country which he had prudently avoided by decamping to the Continent),

. . . we came against the vestiges of the Palazzo Maggiore, heretofore the Golden House of Nero; now nothing but a heap of vast and confused ruins, to show what time and the vicissitude of human things does change from the most glorious and magnificent to the most deformed and confused.

Those who enjoy the frisson of such sentiments may also find gratification in discovering or creating connections between the afflictions of the natural world and those perpetrated on or by human beings. Indeed nature is replete with examples of predatory behavior that most of us find repellent. For example, a family of wasps known as spider-hunting wasps (there are apparently 5000 species in this family!) inhabiting parts of Australia, prey upon the huntsman spider from inside its body. First, a single egg is laid inside the abdomen of the huntsman. Once hatched, the larva eats the arachnid from the inside out. According to an expert in the field, “They tend to leave the vital organs till last.” This apparently is because the wasp needs its prey to be as fresh as possible when it consumes it. The expert quoted online, adds that about ten percent of all insects are parasitic, and he adds laconically, “It’s a way of life for a lot of creatures.”

Truly, such predatory strategies occur in the lives of our own species. I describe here a couple of fictional cinematic instances. Such examples can illuminate contemporary events without the creators of such fictional worlds being necessarily aware of the similarities involved.

These two motion pictures are considered by authorities as two of the greatest of their time. Both were selected for inclusion in the United States Library of Congress’ National Film Registry, being judged “culturally, historically, or aesthetically significant.”

In my article “Beware the Mummy” (August 2017), I drew connections between the cinematic awakening of a long dead Egyptian mummy and the depredations of the religion of peace. (Note: I have abandoned the once necessary scare quotes from around this latter phrase since the true meaning is clear to everyone who has any knowledge or interest in the scriptural outpourings of that ever-spreading enterprise; most of us, I hope, are now astute enough to detect an irony without having it stressed too overtly).

In The Mummy, the viewer is aware from the start of the monstrous intentions of the atavistic creature. In All About Eve, a 1950 movie (based on a short story by Mary Orr) starring Bette Davis (Margo) and Anne Baxter (Eve), the realization creeps up more slowly. We are presented here with the tale of a besotted young admirer of a famous Broadway actress who becomes a trusted and indispensable assistant of the star and of her associates. This foothold is gained despite the reluctance of the actress’s trusted maid to accept the newcomer.

Gradually we discover how Eve begins to supplant the popular thespian. After gaining the confidence of members of the actress’s entourage, the upstart manages through trickery to become the understudy and then to play the starring role in place of Margo. Her performance is a triumph.

In due course we discover that Eve’s background is replete with carefully constructed subterfuge, a kind of takiyya avant la lettre (at least for us in the West, a miniscule number of whom had even heard the word, say, just twenty years ago).  To simplify the plot somewhat, Margo and her closest colleagues (and viewers of the movie) come to understand that the interloper had deceived them from the start, and has inveigled her way to stardom, supplanting her mentor. But this rapid rise is owed partly to the connivance of individuals within Margo’s circle of acquaintances, a kind of fifth column of encouragement; something with which we are now only too familiar in our non-fictional world.

At the beginning of the story, only the maid (a former day deplorable?) seems cognizant of the threat.  Curiously, this mirrors the instinctive grasp by current-day deplorables who detect more readily, or at least more honestly, than their betters, the menace posed by newcomers whose tendency is to supplant their hosts. And Eve is as nice as pie. Like the respectable, besuited neighborhood followers of a seventh century war lord, she appears initially kind, decent and thoughtful.

Eve’s conquest is not unlike that of the proliferating religion of peace, which is also at first subtle and insidious, at least in the West. The adherents are welcomed and coddled, and those who point out the danger are dismissed or silenced by leftist ideologues and useful idiots.

The film ends with a twist, as the now successful and famous Eve finds a youthful admirer waiting in her hotel suite. The young aspirant deploys similar tactics to those which Eve had used in order to displace the fading star of Margo. The sense of this ending implies that the cycle will start over again. A nice twist in the film plot may not, however, be replicated in the actual world. Some might point out that those who have encouraged the overthrow of the West are waiting in the wings as it were (the playhouse is full of metaphorical possibilities which, of course, Shakespeare exploited to the full), for the interloper to create the havoc through which they hope to gain ascendency in pursuit of their utopian aims.

Another culturally significant production which brings to mind our current dilemma is Alfred Hitchcock’s 1943 psychological thriller, Shadow of a Doubt. Hitchcock claimed that this was the favorite of all his creations. This film has thematic similarities to “Eve” in so far as predatory and insidious behavior invades an initially unsuspecting milieu.

Here also, the vacuum of innocence sucks in strands of evil. A bored teenaged girl, Charlie Newton, living in an idyllic Californian town, receives the exciting news that her mother’s younger brother will visit them soon. The uncle arrives, and initially everyone is delighted with his stopover, especially young Charlie. The visitor presents everyone in the family with gifts, including an emerald ring (which has someone else’s initials engraved inside). Gradually it becomes evident that the uncle is wanted for murder elsewhere. Various suspenseful Hitchcockian-type events occur, and finally the uncle is killed falling out of a train while trying to murder his niece (she knows too much). The family decides to keep his crimes secret, and he is honored by the townsfolk at his funeral.

Here again we see the calamities that can befall the innocent and distracted when they are subjected to interference from intruders who mean them no good.

In the natural world, the exploited creatures have no say in their function as prey. That is how nature is. But in the dimension of human interaction we presumably have some choice (leaving aside the interminable and necessarily abstruse examination of what constitutes free will). Allowing enemies, whether they operate instinctively or purposely, to eat us from the inside is an error we may look back on with regret; or, perish the thought, without regret.

The Anglo-Saxon poet surely felt some pang of sorrow.

There one could look upon treasure, upon silver, upon ornate jewelry,

upon prosperity, upon possession, upon precious stones,

upon the illustrious city of the broad realm.