Wang Yi speaks out on BTS {Betraying The Sinosphere) 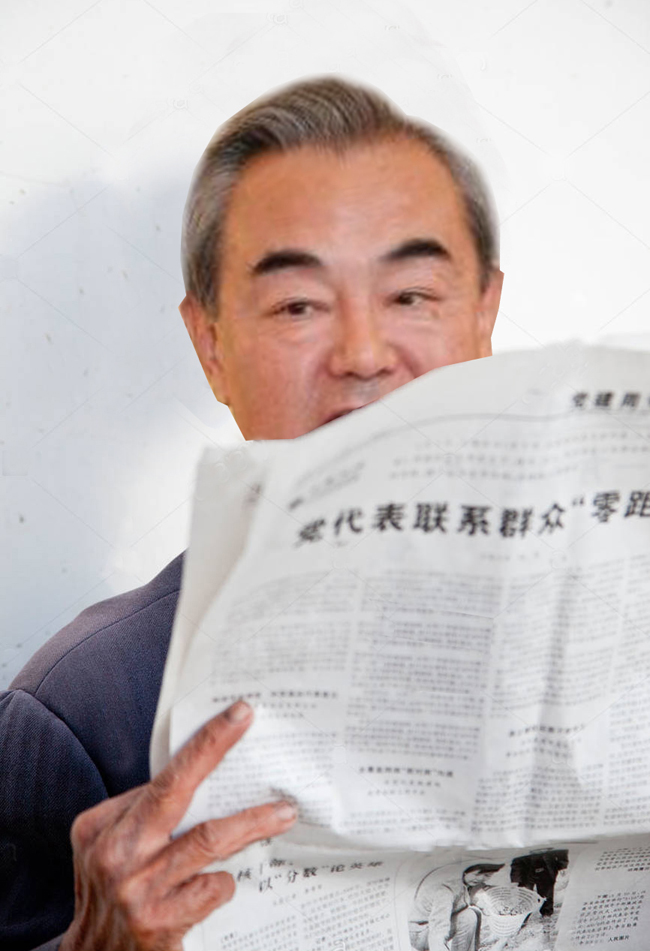 Each morning, I like to have at least 5 callous foreign policy ideas before breakfast. But today I was only halfway through the first –drawing 9 dash lines around Antarctica- when Bowing Thing brought communication of an event so unpardonable that it will change the international order forever. BTS had thanked Korean War veterans for their sacrifices. (Bowing Thing actually spoke in italics and I responded by showing it an emoji of 1.4 billion offended Chinese. It’s a very popular emoji right now.)

BTS is a South Korean “idol group” I had never previously allowed anyone to inform me of. But in the context of such a reprehensible-ism, it is important to receive briefing in order to know in which geographical direction to express outrage. I could feel the hurt feelings of 1.4 billion harmonized Chinese as Bowing Thing read to me a selection of Party core comments on Sina Weibo.

“Before, I thought BTS were pretty cool. Now I will pour real excrement on their merch.”

“BTS have betrayed the world family of Chinese, to which every nation belongs. I spit.”

“What sacrifices? We should eviscerate the southern half of that peninsula that looks like an ill dick.”

“I will never listen to music again.”

“Why do we have nuclear weapons if not for this type of crime???”

“I will never type the letters B and T and S again #OYCOtheirproduct!”

By 10am that morning, the hashtags #BTSHurtChineseFeelingsImActuallyCrying and #inviolablesovereignty had been viewed 18 million times following strict instruction to freely view them for Social Credit System points. (A note has been made of the 1,382,000 names who haven’t yet. That particular clock is ticking violently fast.)

Bowing Thing informed that BTS stands for ‘Bulletproof Boy Scouts’. Further, their fans are referred to as the BTS “ARMY”. And that the group has 7 members, the smallest number possible to form a squadron of soldiers. This yellow haired, Seoul-based US lackey originating “supergroup” is blatantly attempting to militarize popular music and China will never allow never.

By 11am things had taken a dramatic turn as I dictated 3 options for counterattack.

I stood solemnly, hands behind back, my regular expression of humorless severity now something approaching intercontinentally ballistic, pondering the enormous quantity of the decision I was about to make. China in 2020 is not the country where we have to smell the farts of foreigners and call them sweet. “Those farts stink,” I said aloud, and Bowing Thing apologized for a windbreaking event that hadn’t happened. (His training is really kicking in.)

Withdrawing diplomatic recognition of South Korea and closing the Yellow Sea was clearly the most measured action, and certainly the one most proportionate to singer RM’s offence. (He rubbed fat grains of salt into the wound caused by his original remark by “harmlessly” adding, “As members of the global community, we should build a deeper understanding and solidarity to be happier together.” It was a dignity atrocity.) However, we need the Yellow Sea open to break sanctions imposed on North Korea.

Launching an equivalent supergroup was well within our rights as a full member of the United Nations Security Council, but the sheer yellowness of all that dyed male hair would permanently subtract dignity from traditional Chinese hair.

So finally, after much monologue, I opted for response number 3. The task of responding was delegated to the Ministry for Outrage, which occupies 3 basement floors underneath a secret annex at the Ministry of Foreign Affairs of the People’s Republic of China as well as the front and centre of every Chinese’s heart and soul. The name of every Chinese heart and soul has been noted. [End of Statement]

The right to exercise is an exercise that the Chinese people have always exercised. The Chinese people’s right to exercise is an inviolable aspect of the Chinese people’s daily lives and we do not seek to make it a prominent bilateral issue between China and America/Australia/India/the Philippines/the United Kingdom* (see appendix for a full list of new enemies since March). Exercise is a ‘right track’ example of win-win cooperation between heart and lungs and under the basic principle of non-interference in the domestic matters of other countries we view exercise as a no confrontation mutual respect cool-headed peace and stability according to international norms and safeguards response.

The Chinese people have noted that Pompeo distrusts exercise. But as Foreign Minister of the Republic of China and State councilor I would never intervene in the matter of another man’s internal affairs. The atherosclerotic condition of the 70th serving United States secretary of state is solely a matter for the entire American people. Those that draw an analogy between my large counterpart’s plaquey arteries and the fatty, cholesterol ridden state of the American political system have been noted.

This morning my exercise session was brisk and inviolable. To exercise my Party core, I saluted the hammer and sickle one thousand four hundred and forty nine times. Bowing Thing then brought news that India -the surprisingly small ‘big country’ to the MIDDLE country’s west- was banning another 100 Chinese apps. This reckless intention to further decouple will only hurt India. It does not affect China at all and China is not concerned. At all. I made the point that China is not concerned at all in twenty five subsequent interviews until 1am.

“India is on the point of making a monumental choice between its economic nonwellbeing and access to a global dating site,” I dictated while stroll-marching on the treadmill and correcting my cufflinks. “We trust that cool heads will eventually prevail and wiser forces turn down the anti-China rhetoric the interests of our countries are intertwined win-win you know the rest dismissed.”

India is not in the fortunate position of being separated from our peaceful rise by an ocean. What’s more, it is under the ahistorical misapprehension that the ‘Indian’ ocean that bears its name is in anyway connected to the country of India in any possessional regard. This is an unpardonable slur on the Chinese people and we will never tolerate its fantasisation. Ancient maps clearly show dashes written on them in 1949 proving that the Indian Ocean is a completely Chinese body of water. Those who use their hands after toileting have been noted. [End of statement.]

Who is Wang Yi? Better still, what is a “Wang Yi”? I read about myself in the newspapers as a symbolic act of loyalty to core Party coreness. But I have no greater interest in the individual—your concept, not mine— ‘Wang Yi’ than I do in the so-called human rights situation in literally everywhere. I exist wholly to serve the Party and to protect 1.4 billion Chinese from being unpardonably offended by accusations of forced labour so that they may, in mass happiness, wholly serve the Party.

I am, in red essence, a photograph of a man in a suit, mere cypher to the needs of the Party in the 21st century. Yes, I feel love. But only for military drills in the Taiwan Straits and the number 1.4 billion. Yes, I cry. But only after the approval of massive US arms deals for Taiwan. Yes, I have tasted wine. But only following win-win negotiations with a French nuclear bio-virus firm. And yes, I defecate. But only to purge my insides of ideological impurities.

So I am irked when hostile foreign press prints mercilessly incorrect facts about my personal history. This very inviolable morning, Bowing Thing brought communication of a deliberate slur in the Japanese media, who claim that from 1998-2001 I was an assistant Minister, CPC Committee Director and Director General of Department of Policy Research. I was, as the whole world knows, an assistant Minister, CPC Committee Member and Director General of Department of Policy Research. But it was too late. This slander against party organization, outrageously elevating my status at that time to the equivalent of developed when I was developing, had already upset the Chinese people out of its state of permanent immaculate harmony. Ploughs stopped in fields, noodles went cold, and vocational education and training in legitimate Vocational Education and Training Camps came to a vocational halt in fiery indignation.

I called in the Japanese ambassador for a full and frank dressing down exchange of my views to meet the requirements of the new era. In part to make amends for historical crimes, I sat the little Japanese on a chair three inches closer to the ground than was mine. I began the meeting with a subtle raising of my left eyebrow. Such departure from diplomatic niceties underscored the graveness of the situation.

Having been ambassador to that country, the Japan one, I am fluent in ‘its’ language. So I spoke only in Mandarin. I had instructed my translator to adopt the low, poised, angry dragon posture. He then interpreted my correct sagacities in rough dialect while crouched on the floor. I intermittently kicked him, his cue to make a threatening ‘tsssss!’ sound with outstretched tongue. It was all part of the message that this is not the 19th century and the Chinese people are not to be drugged and split. I ended with the word ‘inviolable’, as is my agreed upon international diplomatic right, and made a statement encapsulating the meeting’s friendly-hostile spirit of win-win. After leaving the room, I instructed my translator to maintain the dragon pose for a further two hours in order to safeguard the dignity of the Chinese people. The angle of his crouch was noted. [End of statement.]