The Corridor: A Work for Voices 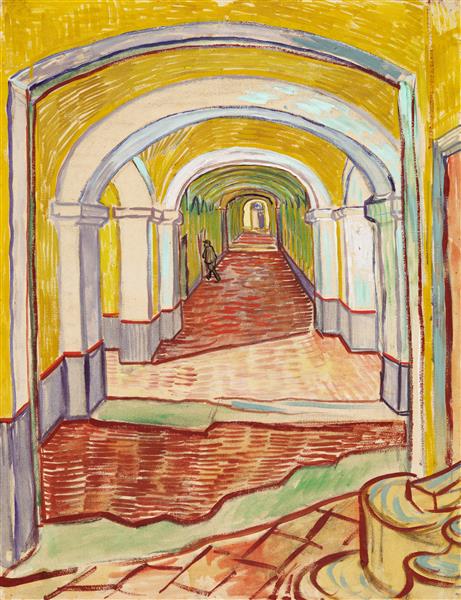 A ceremony of seeing anew. A facility for elderly persons. A small gathering in a corridor outside a substantial locked door. Each one is equipped with a small bell. Four or five persons. Most are in wheelchairs. One must be able to walk with a cane. Race and gender are not relevant here.

They’re having their dinner earlier than usual.

The door seemed doubly locked. I thought I heard a bolt, then a thud.

There was supposed to be an evening program. A singer.

Cancelled. I saw a flyer.

When it’s a good singer, I like it a lot. They don’t give much notice.

They assume we have no plans. Our disappointment doesn’t count.

We seem to have fewer visitors than before.

I got a postcard from a cousin travelling in Wyoming. Postmark and scenery left room for very few words. “Hope you’re doing okay.”

It wouldn’t of course be “wish you were here.”

They mean well, but we’re not in their lives.

Sometimes each card or visit is like a gift they can’t quite spare.

It’s lovely, though, when the photos on our bureau turn into visitors. Magic.

I wonder of it saps our energy—this waiting for mail, hoping for a visitor, wishing staff could be in less of a hurry.

It re-enforces that we’re outsiders, keeping up a kind of romance with a world where we don’t live any more.

It’s a different kind of outside from when we were children seeing war movies: Will there be a next time?  Will we live ‘til morning?  How romantic that seemed.

The danger then was so far away.

Sometimes I dream of hearing, feeling the truth of “For you no hour’s too late, no task too wearying.”

Does it also scare you?  As though you’ve saved up coupons for permissible occasions, urgent, probably final, follow-up unnecessary.

Does it make sense to make plans for the future? The past can’t be our home.

People talk about glory days.  Did we have some?

Not exactly, but a sense of the height and shine of some things—the bigness of life.

That may not depend on age.

It used to be that retirement came near the close of life. Maybe a few years of hobbies or not having to be somewhere on schedule. If more time appears later, is life-cycle disturbed or extended?

And the golden years?

These days, when I write a letter to a long lost friend, I’m not sure whether I’m saying hello or goodbye.

Someone needs to look in on Fanette.

She says she’s not in much pain, but sleep doesn’t seem to restore her.

We said we’d learn French for her. Remember the organized lessons we sent away for.

A foreign language is really difficult when you’re older.

How hard did we really try?

Fanette needs help.  If you’ll knock at the door, we’ll all sound our bells together.

A few days later. Another part of the corridor, further from the closed door.

She wasn’t well but we didn’t sense it was her time.

She was light and travelled light. Removal must have been easy. It’s still strange to see her room bare, bed stripped, that partial coverlet.

Her relatives on the Gaspé made those arrangements. They didn’t know us .  .  .

She left a note. We were too dazed to unfold it: “You are my friends. I trust you.  We have each other.”

Can we find some way to give her a memorial service?

We’re not clergy. I’m not even sure what her beliefs were.

Not sure, half the time, of our own beliefs.

The dimmer part of this corridor can feel more solemn.

What will we say? This gives me stage fright when I most need courage.

We can’t be casual about stage fright. It’s not so easy to shrug off.

We’ve talked about it before. The fright dreams. Even severe embarrassment  .  .  .

Not prepared enough and the room packed. The lectern too high and not adjustable.

Prepared to the brim and the hall empty.

In more than one dream I was in an attic bound and gagged, expected to sing in public.

It takes courage to have each other and risk the loss of one of us without notice.

And once we know, there’s so much to go through.

Yet if we have each other, when the evening program is cancelled or if the door closes early and stays closed a long time, we are not exiles. We are, ourselves, a refuge.

We’ll find what to say.

My father loved Ecclesiastes and would sometimes read it aloud. “Whatsoever thy hand findeth to do, do it with thy might, for there is no  .  .  .”  I can’t remember it all, but there isn’t in the grave a way to do or know things.

We presented Cymbeline when I was a student.  I remember—mostly—the song at the grave site. “Fear no more the heat of the sun .  .  . Thou thy worldly task hast done, Home art gone and ta’en thy wages .  .  . No exorciser harm thee .  .  . Nothing ill come near thee .  .  . Golden lads and girls all must,  As chimney sweepers come to dust.”  When I sang that song I never thought it would help for saying goodbye to a friend.

Here between the two solemn thoughts, “Whatsoever thy hand” and “Fear no more,” isn’t that also the place where we live?

Considered in that way, could our lives be interesting?  Might someone want to know what we go through?

When the bigness of life seems to come back, I have less stage fright.

“He has put the eternal in our hearts.” I left that out of the “Whatsoever thy hand” thought.

I remember that sometimes the memorial service is called a celebration of life.

These .  .  . weighty thoughts are not an ending sad or happy, but a way now of locating us. We are not dwindling. We have a new locale.

I’d like to dust the piano and play with my own hands that Scottish song we know Fanette liked. “Flow Gently Sweet Afton.”

It just crossed my mind thinking of the tenderness towards the slumber of a loved one, that here might be a kind of pre-death dreaming. I hope that song may be right for her.

The piano will still be out of tune.

Won’t everything sound better by candlelight?