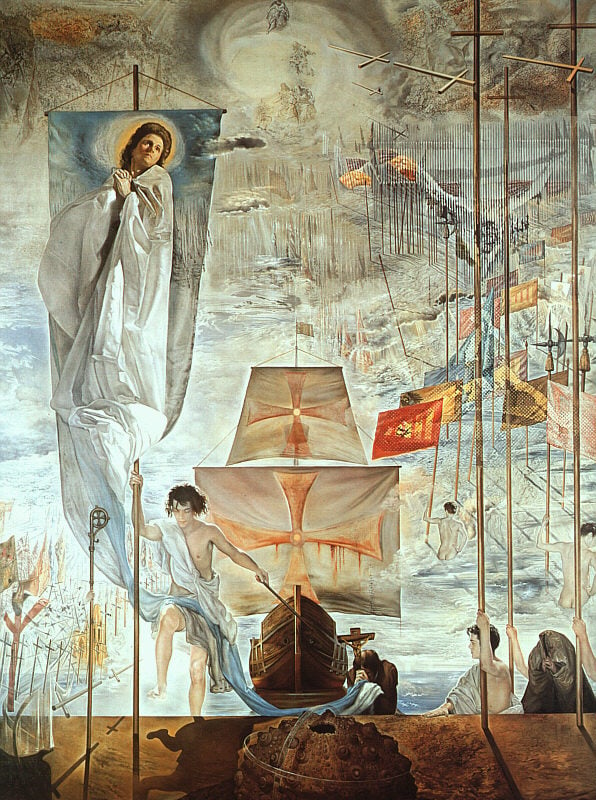 The Discovery of America by Christopher Columbus
Salvador Dali, 1959

nerves are shot,” the bus driver said. “Every year I’ve had fatal accidents. The most recent had my three children on the bus. They all burned alive. My wife was also in the bus, and she is dead, too. Fortunately, I survived, so I will be your bus driver this morning.”

The other children and I looked at one another and gulped.

“When so much has gone wrong,” the bus driver added, “All you can do is pray for deliverance.”

Mr. Gold was the new art teacher. “Since the early twentieth century there have been two movements in art,” he said. “One is toward the abstract and one is toward the particular. The abstract movement in painting dispenses with the image in order to better get at voluptuous feeling. Hence we see Salvador Dali’s painting Columbus as lyrical.”

A slide of Dali’s Columbus appeared on the screen.

“Dali was good. He stood against the Supremacists and other abstractors by giving us Columbus, an individual.  However, there is another possibility. That is the possibility of William Carlos Williams and the Objectivists around Charles Reznikoff. The Objectivists moved toward the particular, but toward those at the margins of history, and even those who were wiped from history. Which one is to be more valued?”

Mr. Gold placed a section from Reznikoff’s epic poem Holocaust on the screen.

“Boys and girls, I suggest to you that abstraction is not the right course. When we go back to our illustrious ancestor the Marquis de Sade, we can see that it was not any particular person that was crushed. On the other hand, Christ’s suffering at Gethsemane was particular. Christ was a particular man. His supporters such as his mother and her friends and the disciples were particular people. Through the exercise of humility, Christ gave the right message to humanity. He argued that will was not absolute, and that a particular person could hold sympathy and cry individual tears. With this, the abstraction of the Romans was abolished. Christ in history is the struggle for the particular, as opposed to abstraction. Nero showed us abstraction in Rome as he fiddled. Chairman Mao showed us abstraction in Peking during the Cultural Revolution, and his colleague Joseph Stalin showed it during the Show Trials. Minor artists of the abstract such as Pol Pot worked miracles with abstraction in Cambodia, and Nicolae Ceausescu worked with abstraction in Romania. Dali is abstract, but he is also particular. When we read the writings of Ceausescu and Mao we are faced with high-order abstraction. It is entirely generalization! They offer mass collective graves. They, the elite of humanity, love death. We love life. Life is specifics. It is the toast our parents ate at breakfast, it is the card they give to us on our ninth birthday, it is the specific tooth of a child who has lost one and puts it under her pillow. All of this awakens schmaltz, say the collectivizers. What they are for is abstraction. The particular women who waited for Christ in the morning after Gethsemane did not understand abstraction. The particular was before them in the person of Jesus Christ.

“Desire is an abstraction. As you look at the women through the peephole of a peep show, or through the portal at Pornhub, you see abstractions. Ask yourselves about those men and women you see. For you, they are not women and men with a mother, a father, a memory of a first report card, a kiss from their father for an A, a kiss from their mother as they stood before her and sung their first communion song. They do not have rents, or car trouble, or an ingrown toenail. They are abstractions, because all too often their families disintegrated, they were orphaned, and turned over to the State, and now they are corporate tools of pornographic abstraction. Against that instinct you have poor Jews writing poems about specifics. The Objectivists were lost in art history. Multiculturalism speaks in abstractions. They speak of men, women, races, classes. Common table salt speaks of the individual.

“A picture of a simple orange can be misunderstood to be a picture of oranges in general, and this destroys the particularity of any given orange. The task of the writer and painter is to describe a particular person, a particular scene, and particular words coming out of a particular mouth. The work of fine art has an aura that the collectivity lacks, and we must stand for the individual, in this age of machines.

“One Jesus Christ, who spoke to ordinary people, could change the world. One Objectivist poet, could render the humanity of a thing . . . “

Mr. Gold summarized. He said that one side of art, the communist side, had become a steamroller, smashing every particular out of existence.

“Your role,” he suggested, “is to look at the eyes of your friends and family members. Pay attention, look at them, and try not to let the collectivizers and abstractionists destroy them. Stay off of public transportation. Tell the collectivizer: speak for yourself.”

Mr. Gold was fired that afternoon because he had spoken in favor of the Individual. The collectivists threw a fit and cited the separation clause. I joined the underground. I wore a cross. I saved myself for marriage. I walked home and looked at birds and flowers rather than take the bus.