From ITV News and the Daily Mail

An aspiring terrorist fighter who trained for jihad in Syria with paintballing and gym sessions has been jailed. Ahmedeltigani Alsyed (known as Ahmed) was also convicted of disseminating terrorist material, including execution videos and bomb-making guides. He was sentenced to four and a half years imprisonment.

The Sudan-born extremist was a member of a secret chat group planning to fight alongside terror groups in Syria while also building his strength at the gym.

His brother Yousif Alsyed, 18, pleaded guilty to preparing terrorist acts and disseminating a terrorist publication, but will face sentencing at a later date.after spending yesterday in the hospital wing at Belmarsh Prison. The pair had a ‘shared aspiration’ to fight in the war-torn country and become martyrs with Mohammed Ali, 18, and a 17-year-old Deliveroo driver, who cannot be named, Woolwich Crown Court heard. 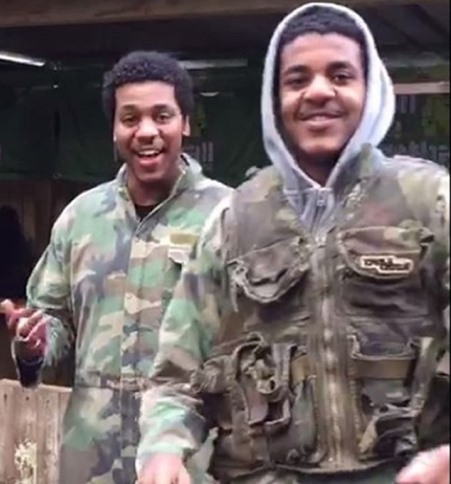 The pair joined their cousins for a paintballing session at Blind Fire in Surrey as part of their training. During the paintballing session, Ahmed, was filmed making an ISIS one fingered salute and telling the camera in Arabic: ‘This is a message to everyone. If we do not come back safe and sound, look after our families. That is all.’

Ahmed Alsyed claimed the paintballing trip in September 2016 was an ‘innocent afternoon’ out, and had been invited to by his cousin. He told the court: ‘To be honest I was terrified,’ he said ‘I was hiding the whole match as well. I didn’t want to get hit.’

Judge Andrew Lees said: “Having heard the evidence and considered the evidence of your radicalisation, your communication with others, and your intention to die as a martyr, I am sure that the comments were not about paintball but about jihad. It’s with great concern that you were commenting in the way you were in front of your two young cousins who were 14 and 11.’

Their plan was foiled when the younger of the two was referred to police by his school and they were arrested at Heathrow Airport after returning on a flight from Egypt in August 2016.

The brothers’ seized phones contained a large amount of ‘Islamist extremist mind-set material and Telegram contact with a facilitator in Yemen about potential travel to Libya or Syria in the purpose of joining Daesh,

Ahmed Alsyed also said he had listened to Anwar al-Awlaki, the former leader of Al Qaeda in Yemen, who he thought he was an ‘amazing person’ and he ‘loved him so much’.He said he was motivated by ‘watching videos of martyrs smiling’.

Two videos found on the brothers’ phones were shown to the court, including one demonstrating where to stab victims in ‘lone wolf’ attacks and how to make bombs at home. . . A further section gives instructions on how to make an IED using hydrogen peroxide and ball bearings before being demonstrated on a live human being, also said to be a spy, who is shot at in a desert before the device explodes.

He was detained for four years and three months at a youth detention centre. A parole board will rule whether he can be released after he has served half of the sentence. He will also be subject to a one year license period on his eventual release.

Ali was jailed for four years and two months and the 17-year-old was detained for two years and eight months at the Old Bailey last November.

Yusef Alsyed will be sentenced on a date to be set.