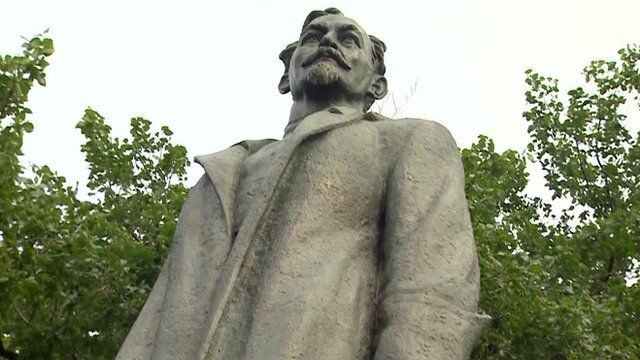 In his unfinished book, The Last Tycoon, F.Scott Fitzgerald made the acerbic remark that there were no second acts in American life. The remark was falsified by his own career, particularly after the sucess of The Great Gatsby. Now the pertinence of the remark can be assessed in relation to the phenomenon happening in both the United States and Russia, the destruction or maintenance of images of controversial or discredited figures in the history of the two countries. The fate of the images are indications of real or potential changes in the political climate, second acts,  in the political theater of the nations.

In the U.S. in recent months the removal or destruction of monuments and statues symbolising controversial figures of the Confederacy has divided the country. In contrast, authorities in Russia are considering restoring the symbols of disliked figures with notorious records in the Soviet Union. Both countries are considering how best to deal with unpleasant memories of the past.

Statues and memorials are indicative of the important role that individuals have played or are thought to have played, or illustrate past importance in the history of the country. Russia illustrated this latter concept with the erection in 2016 of a 50 foot statue in central Moscow of Vladimir the Great, the 10th-11th century prince and ruler of Kiev who consolidated a considerable area of territory and brought Orthodox Christianity to it.

A more well known figure for Russians and Americans is now being resurrected. On September 5, 2017, in the city of Kirov (once named Vyatka) some 500 miles east of Moscow, a large, majestic looking statue of Felix Dzerzhinsky was unveiled. Roses were left at the foot of the statue together with a statement that he was a splendid revolutionary who neutralized the enemies of the revolution in the hard struggle that followed the 1917 revolutuion. Others may well disagree. There are more than 1,300 people in the Kirov area whose families were targeted in the terror of the Soviet Union that began with the man being honored.

There are in fact a number of monuments to Dzerzhinsky in other cities in Russia, such as the large bronze statue erected in May 2006 in the grounds of the military academy in Minsk, Belarus, his home town area. but this one in Kirov is significant becsause it raises the question of whether a similar memorial to him will be followed in Moscow and this be a reminder in the capital of the dark years of the Soviet Union.

Felix Dzerzhinsky was born in 1877 of aristocratic background in the Minsk region, now Belarus. After brief considersation of becoming a Jesuit priest, he became a revolutionary in his youth, was expelled from school,  was arrested a number of times, and sent 11 years in Tsarist prisons and in Siberian exike. He joined the Bolshevik wing of the Marxist organisations and endorsed Vladimir Lenin’s point of view of the need for revolution. With the Bolshevik Revolution in November 1917 he at the age of 40 was put in charge of security arragements.

He became the head of the secret police, “the lion of the revolution” for some, but for many more the most feared and hated man in the country. Virtually living in his office which curiously had a photo of Rosa Luxemburg on the wall, he lead a spartan life. His own motto was to have a cold head, hot heart, and clean hands. But in practice he was ruthless and fanatical. It was he who organized the embalming of Lenin’s body.

Dzerzhinsky died after a two hour speech, in which in characteristic fashion he denounced major political opponents, Leon Trotsky, Grigory Zinoviev, Lev Kamenev, by coincidence or not, all born of Jewish ancestry, to the Bolshevik Central Committee on July 20, 1926, supposedly of a heart attack, though some suggest he was murdered. His funeral was a significant event, taking on a Hollywood aspect since among the attendees were Mary Pickford and Douglas Fairbanks who were visiting the Soviet Union at that time. At that moment Josef Stalin called him “a devout knight of the people,” but in 1937 criticized him as a person who openly supported Trotsky against Lenin. One surprising factor is that one of the rare photos in existence of Trotsky and Stalin together is of both carrying Dzerzhinsky’s coffin.

Mourners lauded him for his integrity and incorruptibility.

A number of towns were named after Dzerzhinsky as was the museum in his birthplace. Most significant was the 15 ton iron large statue, popularly known as Iron Felix, erected in 1958 in Lubyanka Square , the location of the KGB. After the attempted coup by Communist hard liners against President Mikhail Gorbachev, the statue was removed on August 22, 1991. It was not destroyed but moved to the Muzeon (Fallen Monument) park in Moscow, the largest open air sculpture museum in Russisa, close to the new Tretyakov Art gallery. The museum which contains images of Pushkin, Lermontov, and Sakharov, asserts that the works displayed are historically and culturally significant, including those relating to the Soviet era.

The changing political climate meant revising attitudes to former heroes. A large mounument in Dzerzhinsky Square in central Warsaw was removed in 1989 and the name of the Square was changed to its original name, Bank Square. Ukraine removed more than 1,300 statues of Lenin, and in 2015 banned all communist symbols in the country.

Like Lenin, Felix Dzerzhinshy died young  but his activity penetrated into almost all aspects of Soviet life: food, schools, military, industries, and factory organization. Above all, he was head of CHEKA (All Russian Extraordinary Commission), founded on December 19, 1917, to combat counterrevolution, sabotage, and enemy agents. It became one of the largest agencies of the state, growing and employing more than 100,000, and deploying paramilitary units of more than 20,000 men.

In 1922 CHEKA was renamed GPU  (State Political Directorate) which continued the operations for the arrests, interrogations, and executions of thousands of political opponents and others, some for “economic crimes”  who were shot without trial or approval of any outside authority, or without any kind of adherence to rule of law or to due process. It acted as judge, jury, and executioner. It was responsible by some estimates of murdering at least 150,000 and perhaps as many as 500,000 innocent people.

Notices of the arrests or executions were given to state authorities only after they happened, not before.  Dzerzhinsky unabashedly explained his role,”we stand for organized terror, terror being absolutely indispensable in the current revolutionary conditions.” He could not “crush counter-revolution with legal niceties.” He was responsible for the creation of gulags, labor camps purportedly to reeducate people, but really for use for slave profit as well as intimidation, and the use of torture and psychological torment. Though CHEKA and its successors were the “secret police.” their activities were widely known. They can be see now as the model for the Gestapo and the Stasi in East Germany.

One paradox in this situation is that in October 1990 a monument was erected in “memory of the victims of the totalitarian regime.” It is  a large stone brought from the Solovetsky Islands in the White Sea, the area of what is said to have been the first gulag, established by Dzerzhinsky. It was erected and remains on Lubyanka Square, next to the physical headquarters of those organizations, CHEKA, NKVD, and KGB, responsible for death of the the victims.

In the United States, General Robert E. Lee is being erased from history. In Russia a recent public opinion poll indicated that almost a majority favor the restoration of Dzerzhinsky to his former position in Lybanka Square. President Putin, appears to be ambivalent on the issue though his view is not clear. It is revealing that on December 25, 2014 Putin renamed the elite Moscow police unit the Dzerzhinsky Division, responsible for maintainin public order in Moscow. And in November 2015 a bust of Dzerzhinsky was placed in the courtyard of the Moscow police headquarters. Putin’s decision on Dzerzhinsky in Moscow will be of considerable usefulness to President Donald Trump and the White House in assessing Russian policies and intentions.

PrevThe latest batch of men convicted of being part of a sexual exploitation gang in Newcastle have been jailed for almost 50 years altogether
Newcastle gang: Carolann Gallon jailed in tears for providing grooming gang with vulnerable girls to exploitNext