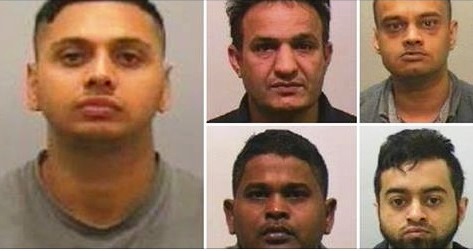 Eisa Mousavi, 42, of Todds Nook, Newcastle has been jailed for 20 years for three counts of rape, conspiracy to incite prostitution, supplying drugs and permitting premises to be used for the supply of drugs.

Nashir Uddin, 35, of Joan Street, Newcastle was sentenced to 11-and-a-half-years for conspiracy to incite prostitution for gain, sexual assault, four counts of suppling of drugs, permitting premises to be used to supply drugs and three counts of possession of drugs.

Taherul Alam, 32, of Normanton Terrace, Newcastle has been imprisoned for eight years for conspiracy to incite prostitution, attempted sexual assault, supplying drugs and allowing premises to be used for the supply of drugs.

Monjur Choudhury, 33, of Philip Place, Newcastle has been sentenced to five years’ jail for conspiracy to incite prostitution, supplying drugs and permitting premises to be used for the supply of drugs.

Prabhat Nelli, 33, of Corporation Road, Newcastle was sentenced to four years for conspiracy to incite prostitution and supplying drugs.

The press were forbidden from reporting the several trials of these 18 men and one woman as they took place, lest information about one influence evidence given in the next. Reporting restrictions were lifted once verdicts were reached about all those charged. I believe that the Judge is taking 4 days to sentence the gang in batches so that their crimes can be aired in public; the newspapers are concentrating on the victim’s statements as to how the assaults have affected them. These are quite harrowing.

A young woman who was abused by a grooming gang in Newcastle has described how the trauma has left her suicidal and sleeping with a knife by her bed.The victim was 17 when Habibur Rahim barricaded her inside a room using a wardrobe and raped her.

“I have suffered severe depression and a split personality,” she said in a statement read to Newcastle Crown Court.

“I feel paranoid all the time and don’t feel safe in my own flat. I have started losing my hair. I wake up in the night fearing Sham [Rahim] is in the flat. I keep wanting to take my own life to get away from it all. I now sleep with a knife by my bed. My boyfriend is scared to leave me alone in case I try to kill myself.”

In a separate victim statement read out at Newcastle Crown Court, another said she still had flashbacks to what happened to her six years ago at “sessions”, where girls were given drugs and then persuaded or forced to have sex with different men.

Another woman said the gang members thought “they are superior to women, and girls do not have the same rights as men”.