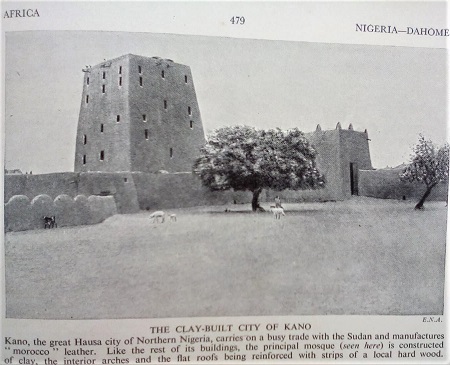 I still have a book that belonged to my late father – The World’s Greatest Wonders. Glossy paper (still in excellent condition) two photographs (B&W) per page of the world’s greatest wonders. The best quality that 1947 could supply. I remember being quite intrigued by the picture of Kano in Nigeria – how on earth did a clay building not disolve in the rain? Much dryer in the Sahara desert was the answer, that and constant maintenance.

Kano doesn’t sound like such a place of wonder to my adult eyes and ears. From the Sahara Reporters

The Kano State Hisbah Corps has arrested a barber from Benue State, Elijah Ode, for allegedly giving his customers haircuts which offend the Islamic faith in the Sabongari area of the state.

It was learnt that the religious police force reportedly arraigned Ode on Tuesday and also had him remanded.

According to a Benue State activist, Smith Akoko, who first brought the matter to the attention of Nigerians, the barber, who is also a student, was arrested last Wednesday, after two of his customers were caught with hairstyles deemed blasphemous to the Islamic religion.

His cousin, Sunday Ukenya, who confirmed the incident to Akoko, said the Hisbah corps arraigned Elijah in court on Tuesday, February 2, and thereafter remanded him in prison. Paradise News of Nigerian confirm that they are a Christian family, and that the accompanying photograph is of Elijah and not just a generic barbershop.

It is not clear yet when his trial would resume. 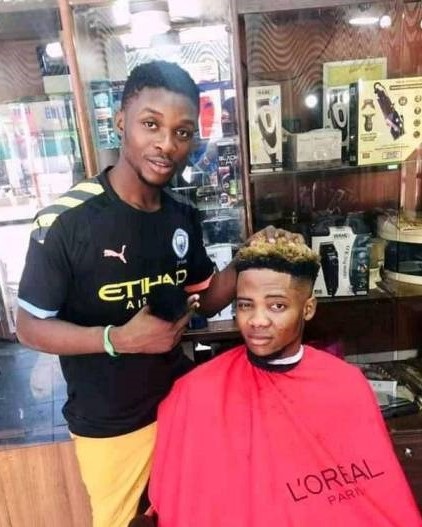 According to eyewitnesses, Elijah, who is well patronised by young people for possessing exceptional skills in giving trendy haircuts, attracted the wrath of the extremists last Wednesday when two of his customers were tortured to stupour for having haircuts claimed to be blasphemous to the Islam.

Thereupon, Elijah was traced to his barbershop, where he was arrested for complicity, and put in police detention with the two customers last week.

According to information obtained from a family member, Ode did not design the hairstyles with the intention to provoke.

The source said, “He is only being innovative and to improve on his work, which he used to eke out a living for himself and pay his fees at his tertiary institution of study in Kano, where he sponsors himself.
“The case is already in the court of law at the wish of the aggrieved Muslims with the first session heard yesterday. But all efforts by the young barber’s lawyer to bail him proved abortive because of the claim that it is a major case and therefore not bailable.

“At the moment, the family has run out of hope, soliciting intercessory prayers as the reality of incarceration stares Elijah in the face.”

PrevThe Nature of the Chinese Threat
If Black Lives Matter wins Nobel, it should be renamed to ‘Mostly Peaceful’ PrizeNext