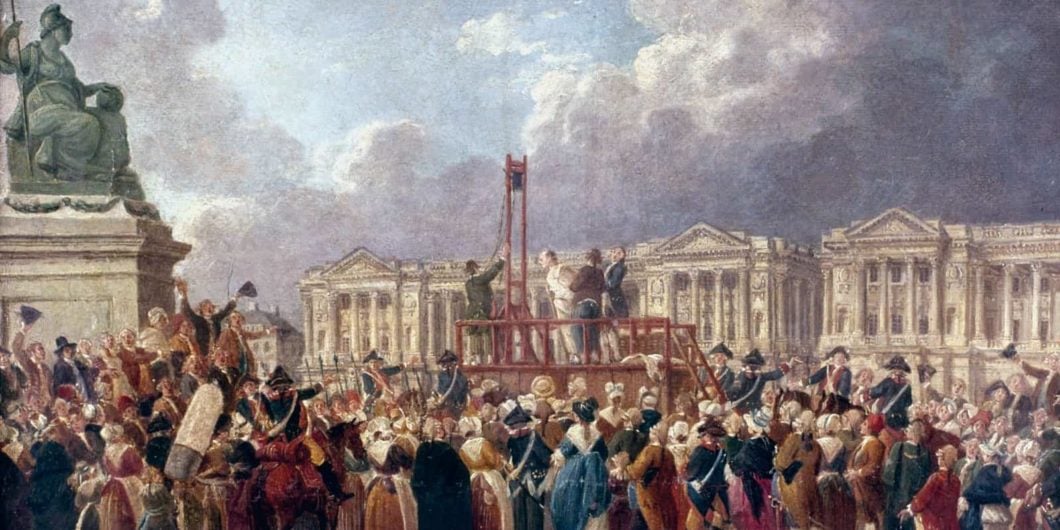 Not long ago, I went to a large exhibition in France of portraits by Elisabeth Vigée Le Brun. I was charmed by the first few that I saw, but by the end of the exhibition I experienced a sensation not unlike that of having eaten too many chocolate truffles very quickly. Everyone she painted seemed to be much the same in character and even, to an extent, in appearance. All lacked firmness, being either winsome or coquettish, though always elegant. I am not an egalitarian, but I felt by the end that I understood a little better the resentment or rage directed at the class whose portraits she painted. Even when trying to be serious, they seemed frivolous. If frivolity can be deep, they were deeply frivolous.

Although Élisabeth Vigée Le Brun appears quite often throughout Benedetta Craveri’s long book about the lives of seven prominent French aristocrats and their circle before, during and after the Revolution (if they survived it), the author does not share my judgment of Vigée Le Brun’s portraits. On the other hand, her account of the lives of her subjects does little to dispel the impression they left me with.

Not long before I attended the Vigée Le Brun exhibition, I had attended another, that of portraits by Goya. The latter was a much superior artist to Le Brun, of course, but there was more to it than that: the people he painted had not the determined levity of her sitters, but an evident depth of character (not necessarily good) that Goya succeeded in conveying. In culinary terms, one might call it a contrast between a soufflé and a gratin dauphinois.

Of course, one man’s levity is another man’s lightness of heart. The aristocrats whom the author portrays, without fully explaining why she chose them rather than others, were cultivated, intelligent and exhibited “exquisite courtesy, elegant manners, unremitting geniality and a fidelity to their aristocratic civilisation,” not to have known which Talleyrand famously remarked was not to have known the full sweetness of life.

Not one of the seven—the Duc de Lauzun, the Vicomte Joseph-Alexandre de Ségur, the Duc de Brissac, the Comte de Narbonne, the Chevalier de Boufflers, the Comte Louis-Philippe de Ségur and the Comte de Vaudreuil—had any idea that they were dancing on the edge of a volcano. Although they were men of the Enlightenment, and many of them espoused democratic ideas of human liberty (they were mostly enthusiasts of the American Revolution), they were so secure in their way of life, so certain of their privileges, that they could hardly conceive that this way of life and these privileges might not continue for ever, and were certain that they could sustain any amount of criticism. In a sense, they wanted their cake and to eat it too: that is to say, be counted as progressive while retaining their personal and class privileges. Their class represented four per cent of the population at most, probably less; but, at least on the author’s account, it scarcely occurred to them to concern themselves deeply with the conditions in which their countrymen lived. They were certainly patriots, but it might be said that they wished their country well more than they wished its inhabitants well, who were for them mainly a backdrop to their lives rather than those upon whose labour they depended for the extravagant luxury in which they lived even when deeply in debt or nominally bankrupt.

They married in their class mainly for dynastic or financial reasons, and it is not surprising that marriages without love resulted in infidelity. There was no shame in this, rather the reverse; a man who did not have mistresses would have been regarded as deficient or peculiar in some way. Many of them managed to love more than one woman at a time, and women more than one man. This did not mean that they never experienced passion or romantic love, as we would conceive of it, but their love life tended to be kaleidoscopic. Betrayal of others in matters of love was the norm.

They were physically brave with the bravery of caste. In war they were chivalrous in a way that would now seem to us, more accustomed as we are to the idea and even propriety of total war, as highly quixotic. When they were sentenced to death on the guillotine, they behaved with impressive dignity, as if to die were no great thing. They would disdain to show fear to anyone, especially to their inferiors.

Many of them wrote; the fact that their books are mostly unread is not to their discredit, because the vast majority of books are destined soon to be unread. As a class, however, they underestimated the power of the written word and of the theatre, of which they were very fond. The most subversive play of the Eighteenth Century, Beaumarchais’ The Marriage of Figaro, which strongly denounced aristocratic privilege, was first performed at the insistence of aristocrats and to their great applause, only a few years before many of them were to lose their heads on the scaffold.

Craveri’s book is not a narrative history of the French Revolution but a kind of portrait-collage of aristocratic lives shortly before, during and after the revolution. It is not to be recommended to those who do not have much knowledge of the French Revolution or European history of the second half of the 18th Century, for it moves back and forth in time and introduces persons and events without explanation and that will be familiar only to those already with a fairly intimate knowledge of the subject matter. It seems sometimes as if the author is writing for a coterie rather than a general audience. There are also infelicities of style—for example, torrents of unanswered questions—and sometimes errors that even a non-historian might recognise, for example that the French Revolution took place two, not three, centuries after the Spanish Armada. I cannot say that the book is an unalloyed pleasure to read.

It is probably the case that most general readers who read history do so to illuminate the present in some way. Apart from the sheer fascination of the past in itself, they search for historical analogies, which by definition cannot be exact, or else they would be repetitions rather than analogies: for history repeats itself only in outline, not in detail. So what light, after reading 440 pages of quite dense pages written by a real and obviously very learned scholar, as the author obviously is, having devoted a lifetime to reading, marking, learning, and inwardly digesting texts that to the great majority of people would appear obscure and recherché, and will never have the time or inclination to read, does this book shed on the contemporary world? What lesson, moral, political or historical for the present do we draw from it?

The first is that we cannot know what awaits us even just round the corner. It was only eight years between the first public performance of The Barber of Seville and the beheading of Louis XVI, which would have been unthinkable at the time of that performance.

The second is that mockery towards, disdain of, or an attitude of superior detachment from, the established order, can all too easily destroy, or fail to prevent the destruction of, what appears to be solid, and result in untold misery for many years. It took millions of deaths and a quarter of a century to restore stability in Europe after the French Revolution, and this was when the weapons yielded by all sides were comparatively inefficient.

Are we in any danger of a repetition of 1789 and its subsequent working out? Certainly we have the hatred and self-hatred of an aristocracy, albeit a self-made one (that, however, lacks the aesthetic taste of previous aristocracies, and whose only attraction is its wealth), that probably, at least in the popular imagination, constitutes a smaller percentage of the population than did the French aristocracy. The very human impulse to cut off one’s nose to spite one’s face, so long as to do so harms others, has by no means disappeared. There is a widespread feeling that merit—usually one’s own—is insufficiently recognised and that the economic cake (to use a dangerous and misleading, but very powerful and influential, metaphor) is divided according to connections, privileges and so forth, and not as it should be. Finally, the legitimacy of the government is under suspicious scrutiny as never before in the recent past, even by those who have everything to lose by radical change. Although it seems inconceivable that a modern democratic state, with all its powers of surveillance and repression, could be overthrown as the ancien régime was overthrown, we have to remember that the beneficiaries of the ancien régime, highly educated, intelligent and worldly, had not the faintest inkling of their fate only months before it overtook them.

In a way, this is a profoundly optimistic message, for it means that human history is not under anyone’s control. But the price of absence of such control is the permanent possibility of nasty surprises.

PrevThe Once and Future ‘Clear-Eyed Expert’ Robert Malley
Captain Sir Tom Moore: Landmarks lit up to say farewell ahead of Clap for Tom at 6pmNext