Captain Sir Tom Moore: Landmarks lit up to say farewell ahead of Clap for Tom at 6pm

Non UK readers may not have heard of Capt Tom Moore who died yesterday aged 100.  To recap for them, he was a retired army officer, a Yorkshireman from not far from the town where my husband and his own father originated. Last year, aged 99, he decided to raise money for the NHS (an expensive organisation which takes a lot of tax and charity money to run) by walking laps of the garden of the house he shared with his daughter and family. He did this over a period of some weeks, using a walking frame and his efforts caught the imagination of the nation during the first lockdown last year.

He was a nice man. A funny charming old-school gentleman in the best sense of that generation. Everyone’s dad, or granddad. Or these days, great-grandad.

He hoped to raise £1000; he raised over  £33 milion, which is being administered by a foundation in his name. 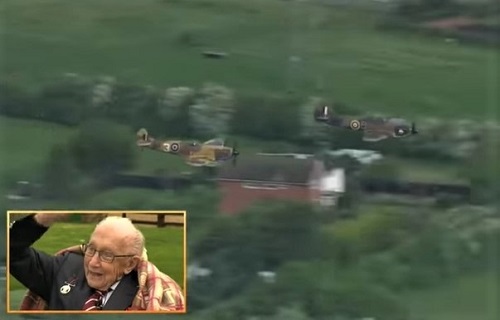 On his 100th birthday vintage aircraft enthusiasts at the Biggin Hill Restoration Hangar said they would fly their restored spitfires over his house in tribute.

No, said the Department of Transport – that’s inessential travel. and people might leave their homes to watch. But the Department of Transport can’t tell the RAF what to do and they sent a Spitfire and a Hurricane of the Battle of Britain Memorial Flight over his street that morning. And to those who queried the cost, it was a training flight, and within the range of such routine maintenance. Or so I read.

He was knighted by the Queen. He stood at his walking frame; he told the Queen that if he knelt down she wouldn’t be able to get him up again. He had a hit record with Michael Ball and an NHS choir, singing You’ll Never Walk Alone. 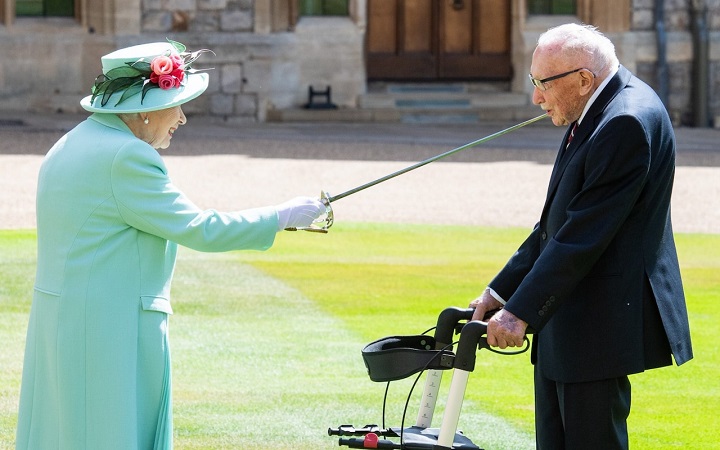 Then, after Christmas, as is not uncommon with the elderly, he developed pneumonia. He was taken to hospital for a week where he caught Covid 19, was sent home, had to return at the weekend and he died yesterday.

Shortly at 6 pm we are asked to stand on our doorsteps and clap in his memory. Some public buildings will be lit up for a second night. 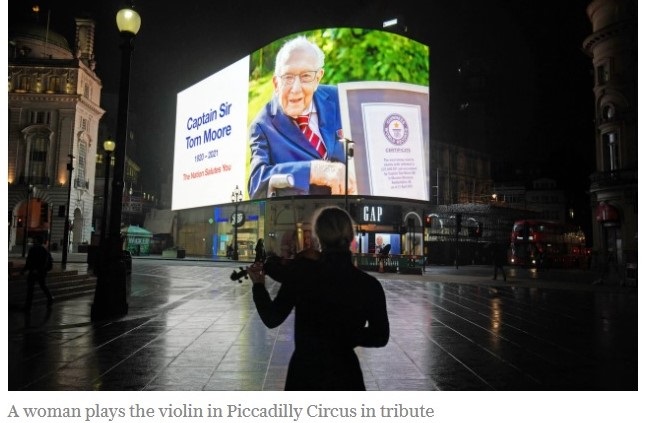 Millwall football team played a match last night. Millwall are noted for declining to join in with the kneel for BLM which is common in English football at the moment. Last night they held a minutes applause in honour of Captain Sir Tom.

It seems strange that I feel sad at the passing of a man I never knew, who I had never heard of until this time last year. But it’s been a strange year and looks set to be equally trying to come. And Capt. Tom seemed to symbolise the generation of my parents, that we call our finest generation, most of whom have passed.

In 2008 I attended a service in Whitehall called last Voices of a Generation. It was a commemoration of the 90th anniversary of the end of WWI and was attended by the three last living men in Britain to have served in that war. Harry Patch, Bill Stone and Henry Allingham, aged110, 108 and 112 respectively. I remember thinking that week that in 20 years or so most of the veterans of WWII would be either dead or well over 100 years old. At that time I had relations still alive and well who had served. Now they are all gone, the last being my mother’s older sister a former ATS driver. Capt Tom seemed to personify them, and my condolences are with his family. Now I must go and find my stiff upper lip which has gone missing this afternoon.