Bradford Grooming Trial: Hecklers called prosecutors ‘slags’ and ‘hoped they would be raped’

From local newspaper the Telegraph and Argus

THE aggressive and threatening behaviour of some of the defendants and their families during and after the long-running Bradford grooming trial can now be revealed.

Following the men’s convictions, prosecution barrister Kama Melly QC said she and her junior counsel, Sharon Beattie, had been heckled and verbally abused outside the court building late on Tuesday afternoon. Miss Melly said several people hanging around after the defendants had been locked up pending sentence had called the lawyers “slags” and said they hoped that they would be raped.

The trial judge, the Recorder of Bradford, Judge Jonathan Durham Hall QC, described this as “absolutely outrageous” and hoped the culprits could be identified and reported to the police with a view to being prosecuted.

A violent disturbance then broke out on the concourse, with several men being ejected from the building and barred from attending the sentencing hearing the following day.

Some of the defendants had to be warned about their conduct during the course of the trial. There were complaints from dock officers and canteen staff about their rude and unpleasant behaviour, prompting Judge Durham Hall to repeatedly warn them their bail would be withdrawn if they did not mend their ways.

“No major city in England and Wales seems to have escaped this problem, grooming by older men acting together or alone,” the judge continued. “Your behaviour has been as wicked as it is incomprehensible to our society, and indeed all in this community.” Your Honour, have courage, mention the influence of Islam. You know it is a factor, and that factor makes sense of it all.

The teenager at the heart of the seven-week trial was plied with alcohol and cocaine before being “raped without blandishment but with violence” by several of the defendants.

“She was treated by you, or some of you, like a toy or a commodity to be used,” the Judge … said. “For years she felt she had no voice and that she was powerless, but she’s got a voice now, gentlemen,” he told the defendants, who were flanked in the dock by up to ten prison officers. 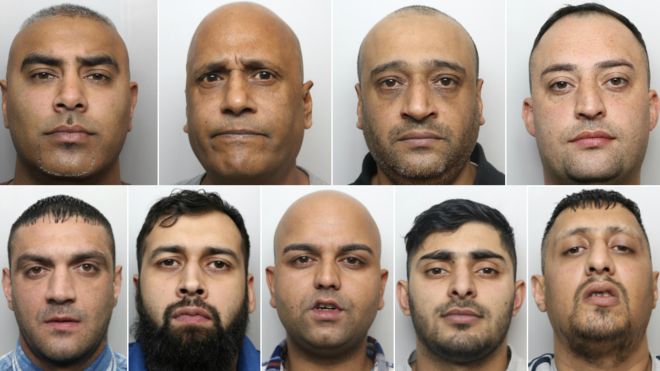 He said of one defendant, Izar Hussain who was jailed for 16 years  “You didn’t bother with the grooming, it was violent rape and attempted rape,”

Although several women family members wept in the public gallery as the sentences were passed and each man was led in turn down the steps to the cells, there was no further disturbance.