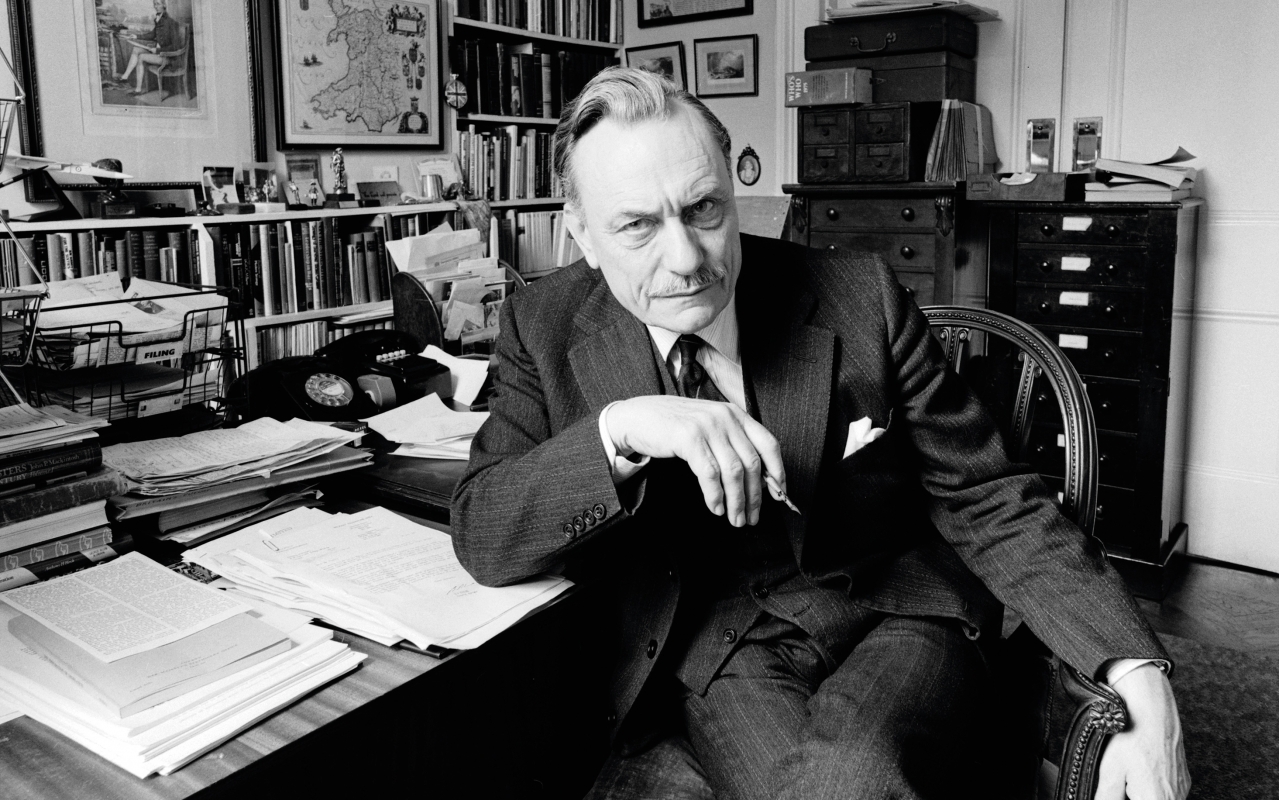 I was only twice in a room with the famous, or infamous, British politician Enoch Powell, both times without speaking to him. Sitting on his own, he had a disconcerting expression of passionate intensity, an intensity that was probably characterological and attached itself to anything that he happened to be thinking about, although early Parkinson’s disease might also have added to the impression. On a radio programme called Desert Island Discs, in which a distinguished guest is asked to choose eight pieces of music that he would take with him if marooned on a desert island, four of his choices were extracts from Wagner’s Ring cycle. This seemed emblematic of the man.

Just because he was passionately intense, however, does not mean that he was entirely consistent in his views throughout his long political career. On the contrary, he changed his views often, and then changed them back again: it was the conviction with which he held them that was constant, like the grin of the Cheshire cat. Whether the intensity with which he held incompatible beliefs in quick succession was a sign of intellectual integrity, laudable flexibility of mind, absence of self-awareness, populist opportunism, or some combination of these, depends on one’s estimate of the man’s character. Paul Corthorn’s new book, Enoch Powell: Politics and Ideas in Modern Britain, will not help anyone to decide.

It does not pretend to be a biography, or even an intellectual biography. Rather, it chronicles, scrupulously but somewhat drily, Powell’s varying attitudes toward the main subjects of his political concerns: international relations, economics, immigration, Britain’s relations with Europe, and the status of Northern Ireland in the United Kingdom. Powell’s wider intellectual interests and religious views are scarcely touched upon, though it is mentioned that he went from being a believer to being (under the influence of Nietzsche) an atheist, to then returning to Christian belief. There is no description of his character in this book, not even by implication, and with this book as a guide, one would not recognise him if one met him. It is not possible to tell whether the author admires or detests his subject. This neutrality creates confidence in the accuracy of his scholarship, but also makes his book less than a pleasurable or exciting read. Perhaps it is the sign of a frivolous mind, but I prefer even histories of ideas to be spiced with a little biography (or, more truthfully, gossip).

The author does, however, offer a unifying interpretation of Powell’s various political concerns, namely that they were all responses to Britain’s precipitous national decline, the steepest part of which occurred in his lifetime, but which is continuing apace to the extent that Britain might even cease to be a nation at all. Powell was born in a great power and died in an enfeebled country with no industrial or military might, with precious little patriotism, and with no sense either of grandeur or collective purpose.

That this decline – relative rather than absolute, except in such fields as the maintenance of law and order—was inevitable given the conjunctures of the age, was evident to Powell (though not at first). This relative decline was already implicit in Disraeli’s dictum that “the Continent [of Europe] will not suffer England to be the workshop of the world.”

Powell’s concerns, then, were how to manage Britain’s decline and how to find it a new place in the world. He had not always been perceptive about the scale of its decline. He clung, for example, to the illusion that the Empire might still count for something even after the Second World War. Thereafter, however, he became a devotee of a kind of Realpolitik, to the extent of wanting a rapprochement or even alliance with the Soviet Union to balance the power of the United States, whose aims he had long distrusted. He discounted ideology, including communism, as a force in international politics, which is odd in a man who was by far the most intellectual and intellectually accomplished of all British politicians of the 20th century, being both a classical scholar and a brilliant linguist. He seemed to think that Soviet ambition was merely that of any large power in the great game. Those countries that fell into its grip knew otherwise.

On economics, Powell was an early devotee of the superiority of the market over state planning at a time when the intellectual tide was running the other way. There was one important subject, however, on which he was a confirmed statist, namely that of health care. He was for a time Minister of Health in the British government, during which he fiercely defended the NHS. He believed that the government had an ethical duty to provide health care for its citizenry, and it never seemed to occur to him that the centralised NHS was not the only possible way of doing so. He was often highly suspicious of international comparison, but it is difficult to see how judgment of the merits of a system could be made without it. It was clear, moreover, that in this, as in other fields, Britain was at best very mediocre. Perhaps Powell was blind to the NHS’s mediocre performance because of the benevolence of its stated intentions (an occupational hazard among intellectuals, even—or perhaps especially—among brilliant ones). At any rate, he never satisfactorily explained why health care should be different from other spheres of service provision in the superiority of private over public organization.

But Powell is remembered mainly for his views on immigration. If he had not made his famous, or infamous, “Rivers of Blood” speech in Birmingham in 1968, I suspect that he would hardly be remembered today. I am not qualified to assess the lasting value of his contributions to classical scholarship but, without this one speech, I think that only those with an obsessional interest in the minutiae of British and Conservative Party politics of his time would wish to read about him.

In that speech, Powell drew attention to what he supposed would be the social and political consequences for Britain of mass immigration, which was then principally from the Caribbean and the Indian subcontinent. No single speech has ever ruined more comprehensively a serious politician’s chances of attaining power, nor has any speech of the 20th century by a British politician been more reprehended or given more varied interpretations. Was it racist? Was it not racist? Was it decent? Was it indecent? Was it prophetic? Was it merely alarmist?

Corthorn does not identify one aspect of it that is of singular importance. The only specific group of immigrants to whom Powell refers in his speech is the Sikhs, which is not surprising because his own parliamentary constituency at the time was Wolverhampton, whose largest group of immigrants at the time were Sikhs. But no rivers have foamed with blood as a result of their immigration; to the contrary, the Sikhs have been singularly successful, and both their crime and youth unemployment rates are lower than those of their white contemporaries. The household income of Sikhs is considerably higher than average. There is no evidence whatever of their inability to integrate, and they make virtually no special demands for privileges, contrary to what Powell feared.

While Powell was fairly accurate as to his estimate of the growth in numbers of Indian, African, and Caribbean immigrants and their descendants, he was not particularly prescient about the consequences. He said nothing, for example, about the potential rise of Islamism and its associated violence when compared to the almost completely peaceful integration of most other groups. Such violence as he foresaw was interracial, not religio-ideological, and even that (so far at least) has been on a small scale, statistically-considered (though statistics are not the only measure of importance). Nor did Powell foresee the rise in European immigration into Britain. As a prophet, then, his record was spotty, and such was his notoriety that in practice his speech made discussion of subjects such as immigration and multiculturalism more difficult, contorted, and dishonest, rather than easier, more straightforward, and honest.

His attitude to other questions was only partially consistent. For example, he opposed the theory that an educated population would necessarily be a highly productive one and therefore that tertiary education should be expanded drastically. He opposed this theory on three grounds. First, it was empirically dubious or false. Second, it was utilitarian in a deeply philistine way. Knowledge was an end in itself, a value that a university should be dedicated to preserving. Third, in a system of state-funded universities such as Britain’s, expansion was potentially a means of establishing almost totalitarian control over the population. He favoured a mixed system, in which “form, volume and content reflected the demands and needs of the community in a way impossible if public provision were automatically to be multiplied by rule-of-thumb,” and in which the state system would imitate the private. He wanted supply to follow demand, not the other way round.

This is all very well as far as it goes, but it does not go very far. Even in a mixed system, demand for places in universities is often determined in what Powell would have considered a philistine way, namely by the supposed economic advantages that the education provides. University degrees in western societies have largely become tickets of entry into the labour market at various levels rather than the reward of genuine learning or vocational competence, and are of no other intellectual, spiritual, or practical value. Whether anything can or ought to be done about this is a question too complex for Powell’s thought.

If you want to know Powell’s ideas on the subjects which concerned him, this is a very valuable book. But there is a sense of futility, almost of tragedy, that suffuses it: why did such a brilliantly gifted person waste his talents on politics?