From the Telegraph and the Daily Mail

The controversial group, Cage, has used the highly emotive video (a “deliberately misleading” online film in which a Muslim woman claims she was “raided” by counter-terrorism officers moments after giving birth) to suggest the Government’s counter-terrorism strategy, Prevent, is leading to children unfairly being removed from Muslim families wrongly thought to be radicalising their sons and daughters. 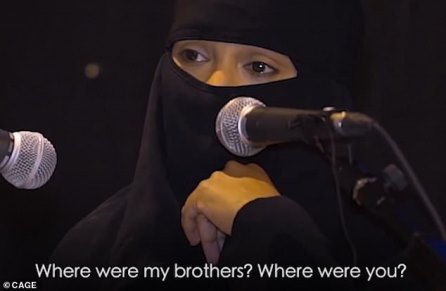 In a three minute 35 second clip, the woman, who wears a niqab and uses the fake name Sister Maryam, weeps as she says she was targeted while she still had blood on her legs at a London hospital delivery room. After urging people to donate money to Cage, the woman, who cannot be named for legal reasons, declares: “They are not killing our children, they are taking our children away. What for? Because we are Muslim, that’s all.” She later adds: “Prevent tried everything.”

It’s a bit stupid, her asking “where were my brothers?” when her husband (aka Mikaeel Ibrahim)  has form for beating up people he believes to have breached sharia no mixing ‘laws’. No-one but her husband and father would dare come within half a mile of her.

The Sunday Telegraph can reveal that the woman was the wife of convicted Islamist extremist Michael Coe, a Muslim convert who became the bodyguard to jailed hate preacher Anjem Choudary. And, police went to the hospital in 2016 to arrest Coe, a self-appointed Muslim “enforcer”, who had earlier attacked a schoolboy for what he deemed non-Islamic behaviour.

According to Scotland Yard, police then sought guidance from doctors to find an “appropriate time” to conduct a “brief search” of the delivery room where Coe had been.

The year old clip of ‘Sister Maryam’ posted on Cage’s Facebook page has been seen nearly 400,000 times. However, neither Cage nor the woman explains the real reason police went to the hospital or her links to a violent man enforcing extremist views within the community.

In a statement, Mr Qureshi, the organisation’s research director, said: “Our client’s testimony is an honest and truthful account. There is never a justification for raiding a birthing suite. Not only was the armed counter-terrorism police raid a severe violation of privacy, it posed a serious danger to a mother and newborn child…”

Security Minister, Ben Wallace, said the report was “the usual Prevent bashing” using “twisted facts and disinformation to sow division our communities for their own purposes”.

PrevThe United States Senate and the Presumption of Innocence
Justice for Dr. FordNext