On bringing children to political protests 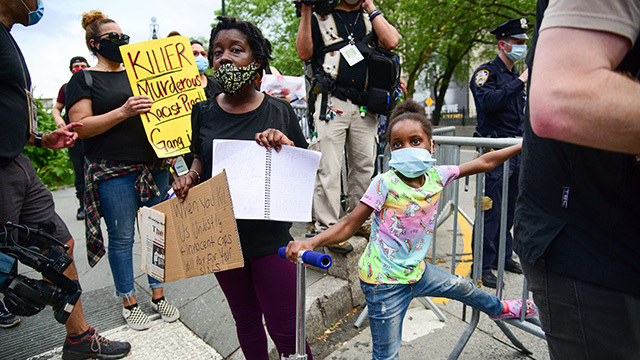 “Give me a child until he is seven,” said St. Ignatius Loyola, at least allegedly, “and I will show you the man.”

Whether or not St. Ignatius actually said this, I could not but help think of these words when I read a short report from a New York Times correspondent in Oakland. The report went as follows:

Close to downtown, a few hundred protesters peacefully marched through the streets, chanting and carrying signs.

Behind the diverse crowd, Donavon Butler, 33, drove a white minivan with his wife and four children inside. His 5-year-old son, Chase, hung out the back window with his right fist raised and his left hand holding a cardboard sign that said “Mama! I can’t breath. Don’t shoot.”

“The world we live in is not equal. People look at us different,” Mr. Butler said he told his son.

This report was published without commentary, so it is impossible to say—though perhaps not to guess—what the correspondent’s attitude to the episode was. But it horrified me.

What kind of parent takes a five-year-old child to a political demonstration that, even if presently peaceful, has an obvious potential to turn violent? Surely the father knew this: he could hardly have been completely ignorant of what was happening elsewhere in the U.S.

What kind of parent uses his child as an instrument to promote a political message and teaches him (at age five!) to make a political gesture that has, at the very least, connotations of intransigence, if not of outright violence? And what fathomless sentimentality—the reverse of the coin of brutality—allows someone to believe that the participation of a child in a political demonstration adds to, rather than detracts, from the power of its message?

Clearly the father also believed that a child is never too young to resent—and should be indoctrinated into doing so. That the world is unequal, unfair, and often unjust is true, but resentment is, of all human emotions, among the least constructive and most incompatible with real happiness, though it may bring with it certain sour satisfactions, including the elimination of personal responsibility for one’s situation. Unfortunately, also, it is one of the few emotions that can last a lifetime, for it is protean in its ability to find justifications for itself. I hope that in this case the father’s conduct was an error committed in the heat of the moment, rather than a settled plan of education.

We are appalled—rightly—at the use of child soldiers in civil or international wars. There could hardly be a greater manifestation of inhumanity. The use of little Chase was not in the same league of abuse, but abuse of him it was, regardless of whether the correspondent of the New York Times recognized it as such.