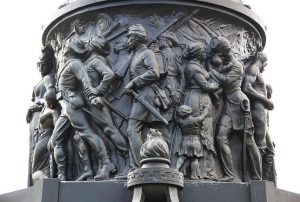 The Princeton University Library collections are among the most valuable in the world with their holdings of seven million printed works and five million manuscripts and diverse objects. Those holdings continually grow with additions of print, digital non-print, and manuscripts through acquisition or gifts. The Library has been generous in its displays and educational in organizing exhibits. The current exhibit on display is titled “Through a Glass Darkly; Alchemy and the Ripley scrolls 1400-1700.” An exhibit planned for 2003 is “The archival world of Toni Morrison.”

It is therefore stunning that Princeton, in an unaccustomed example of “wokery,” surrender to cancel culture, and rewriting of history, cancelled an exhibition, planned for months, due to be opened in April 2022. The exhibition, of which the main donor was Leonard Milberg, Jewish financial manager and generous donor to the University whose name is on the gallery where the exhibit was to be held, was to display Jewish American artists in the late 19th century and included two who were soldiers in the Confederate army, Moses Jacob Ezekiel and Theodore Moise.

The exhibition, to feature American- Jewish artists in the Gilded Age 1865-1900, was planned to coincide with the publication of Milberg’s book, Yearning to be Free, the title referring to a line in Emma Lazarus’s 1883 sonnet, The New Colossus which appears at the base of the Statue  of Liberty.

The cancellation of the planned exhibition is an irony: the exhibition that was meant to remedy an erasure of American art history is now being erased.  The cancellation has dishonored Princeton’s own principle, to present and explain materials in a manner consistent with the Library’s educational and research mission. The exhibit would have expanded research by helping to restore to American art history  the presence of Jewish American artists active in the U.S. during the 19th century, such as Henry Mosler, successful  professional artist. While renowned contemporary Jewish-American scholars like Larry Silver, Matthew Baigell, Barbara Gilbert, and Samantha Baskind, have documented Jewish-American artists of the 19th century, there is little mention of these artists in mainstream American art history  books. This exhibition would have helped fill in the gap of the presence and activity of these neglected artists.

The centerpiece of the proposed exhibition, containing 50 objects, was a marble sculpture, 64 inches, by Ezekiel, of a boy holding a flaming lamp in one hand while he raises the other hand to the heavens. Moses Jacob Ezekiel 1844-1917, born in  Richmond Virginia,  part Ashkenazi and part Sephardic, was a sculptor, the first important American Jewish sculptor.

Ezekiel also believed in states’ rights, and enrolled in 1862 at the Virginia Military Institute, the first Jew to do so.  During the Civil War, while still only aged 20, he aided Confederate General John C. Breckenridge, joining the cadet’s charge against Union lines in May 1964 at  the Battle of New Market, Virginia, where the Confederates defeated the Union army.

Thus, Ezekiel can be evaluated in two ways:  proud Southerner who always kept a Confederate flag in his studio, and an individual who was an observant Jew who at the age of 13 produced a bust of Cain. Ezekiel won a prize that allowed him to live in Rome where he lived for more than 40 years, yet his most important sculptures were for the U.S.  His allegorical marble sculpture of “Religious Liberty,” a single block of Carrera marble, was commissioned by the Independent Order of B’nai B’rith, in 1876 to honor the U.S. Centennial of Independence.

The work is of an eight-foot-tall woman,  reflecting liberty protecting religious freedom, wearing the liberty cap bordered by 13 stars, and holding the U.S. Constitution. The sculpture stands outside the National Museum of American Jewish history in Philadelphia, near the Liberty Bell.

Ezekiel was a prolific sculptor of religious. Southern, and Confederate themes made no secret of his Confederate activities. As a result, the United Daughters of the Confederacy asked him to execute a memorial honoring the confederate dead at Arlington national cemetery. He produced in 1914 a baroque statue illustrating Southern heroism. The woman in the memorial representing the South appears to be protecting the black figures, but critics see it as propaganda for the lost cause, rewriting history. After his death Ezekiel was largely forgotten, largely because his artistic style was one of emulation of the great past masters, not one of innovation. Shame on Princeton which wants him to remain forgotten,

The second cancelled artist by Princeton is Theodore Sydney Moise, 1808-1883, who was born in Charleston, South Carolina, a portrait painter, and skilled horse painter. Working in a neo classical style, he maintained a studio in New Orleans. His painting of General Jackson on horseback in 1815 (City Hall, New Orleans) won a prize. He continued with paintings of distinguished citizens of New Orleans, containing many portraits of judges and members of the Volunteer Fire Brigade in the courthouse of New Orleans. During the Civil War Moise was a major in the Confederate army, and participated in the defense of the lower Mississippi by helping to employ floating  fire rafts to repel the Federal fleet.

Leonard Milberg was naturally disappointed at the cancellation of the art exhibit.  He has funded 11 previous exhibitions at the Princeton Art Museum and Princeton Firestone Library and donated 10 collections to the University. Among them was a show in 2016, “By Dawn’s Early Light,” devoted to Jewish contributions to American culture from the nation’s founding to the Civil War.

Another ironic factor in view of the cancellation is that one of Milberg’s contributions to the Princeton Library was an exhibit of his Irish prose collection. This included a number of letters and works by the Irish writer, Francis Stuart, who was a Nazi sympathizer, and who spent World War II in Berlin where he made antisemitic broadcasts. In addition, part of Milberg’s collection which was exhibited were other antisemites, Tom Paulin and Oliver St. John Gogarty, vicious anti-Semite, who was thinly described as a character in James Joyce’s Ulysses.

At this point it is still not completely clear who first raised the problem and suggested the cancellation of the exhibition. Apparently, a Princeton official for diversly was disturbed by the Confederate links of the two artists, but it seems ultimately to have been cancelled by Milberg because of the proposed censorship of the artists. It is intellectually dishonest to remove the artist with Confederate ties and   rewrite art history.  The ghost of cancel culture should not haunt Princeton.

Princeton University itself lists its official policy that gifts to the university and Library must respect the university’s fundamental commitment to academic freedom and the rigorous and independent pursuit of truth. Leonard Milberg was right to assert that the exhibition was serving an educational purpose, and that it was groundbreaking in featuring works of an underrepresented period  of Jewish-American history, and to bring back a lost part of American history.