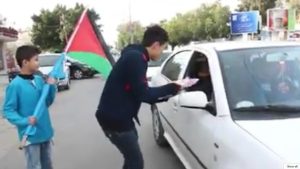 Palestinians hand out sweets to celebrate a terror attack on Israelis

Never underestimate the gall of the pro-Palestinian lobby in the US. The month of March witnessed three deadly terror attacks against civilians in Israel by Palestinian killers. In these three separate attacks, 11 Israelis were killed, most of them civilians. This was widely hailed in the West Bank and Gaza where people poured out onto the streets and passed out candy. Thus, it appears that Israel may be on the brink of another so-called intifada (uprising). Previous intifadas in the past decades have cost the lives of thousands of people on both sides. The important point is that they were started by Palestinians.

And keep in mind also that intifadas are much more than marches, protests, passive resistance, and people using slingshots against the guns of Israel’s military. They include murderous attacks against innocents, using guns, knives, bombs, or cars.

So, it strikes me as particularly obnoxious when Palestinian supporters turn out in American cities and college campuses and proclaim their support for intifadas. Especially obnoxious are the actions of these people in their Palestinian scarves with the black and white doo-dads marching in New York City this week and calling for a “global intifada,” as reports the Jewish News Syndicate. Keep in mind that New York City has a large Jewish population, and the city has experienced a disturbing number of anti-Jewish attacks in the last few years. This is evidence that the anti-Semitism rampant on university campuses has metastasized into our society at large-at least among certain segments of our population. It is troubling, and I lay most of the blame on the pro-Palestinian lobby in the US.

It is instructive that these people would be calling for a global intifada. They can define it as they want, but history has shown us that intifadas are murderous attacks against innocent civilians, women, and children. Combine that word with chants like, “From the river to the sea; Palestine will be free.” The “river” is the Jordan River on Israel’s eastern border, while the sea is the Mediterranean on its western coast. That means no more Israel and no more Jews. A global intifada would mean more deadly attacks against Jews on the streets of cities all over the world including here in the US.

That is a concept that the majority of clear-minded, decent Americans will never embrace. In spite of all the efforts of the pro-Palestinian crowd, which include appeals to blatant anti-Semitism, a solid majority of Americans still stand with Israel and reject this Jew-hatred that is deeply embedded in the Middle Eastern mindset.

The pro-Palestinian crowd would do well to remember that this is not the West Bank or Gaza, where acts of terrorism are celebrated. We have laws against violence in this country, and plenty of jail cells to accommodate these folks. We don’t want their intifada in our country. It is time we stand up to these bullies. What took place in New York this week does not represent America.