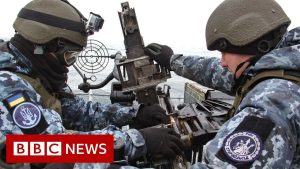 Setting aside truth—‘What is truth? said jesting Pilate; and would not stay for an answer’—the first casualty of war is its reporting.  This is in the hands of television, and has been so ever since it walked off with the battle honours of Vietnam.  And TV now falls at the first fence.  Since the present war is between Russia and Ukraine, it would be good to have both sides available to us.  But the Russian side is confined to the Russian TV channel, RT, and this is banned in Britain.  The authorities evidently believe that viewers would be corrupted by exposure to a channel which is sinister, if not openly devoted to misinformation.  However, help is at hand; British viewers are protected from Russian contamination, and have open access to BBC and Sky TV.  Democracy comes to the rescue.  Saved.

It is indeed a limited choice.  Personally, I find that the best TV coverage of the Ukrainian war available to me comes from Al Jazeera, the name meaning ‘The Peninsula’, the Qatar Peninsula.  The channel Al Jazeera (UK/Europe) operates from The Shard in London, and it escapes from the pieties and self-imposed limits of the native versions.

The shared approach of the UK channels, with their belief system, is the lachrymose tendency.  The reporters, often and characteristically female, are never happier than interviewing women driven from their homes by Russian shelling (which has invariably ceased in the interview area).  Shattered buildings are the backdrop.  The reporters hark back to a famous line from the past, following a communal disaster: ‘Is there anyone here who has been raped and can speak English?’  That quest, whether openly admitted or not, never ceases.  British reporters will be the first to uncover war crimes, for which they will receive unending professional acclaim. Menfolk nearer the front line encounter male reporters, to whom they will speak of their refusal to give up an inch of Ukraine territory.  A tall order, as many will think.  As is usual in war, the people actually on the spot know least about what is going on.  For that we turn to the evening map-wraps given by retired Army officers.  These are all of senior rank, the matter being too grave to be left in the hands of junior officers.  The pointing fingers on the screen are for what are assumed to be Russian movements, or at least plans.  Nobody knows what they are.  All we can see is giant pincer movements threatening now Kharkiv (in WW2 known as Kharkov) and Kyiv, better known as Kiev.  (My local branch of Sainsbury’s continues to sell Chicken Kiev, of which I am fond.)  The UK media sucks up to Ukraine, even in its spelling.  Throughout history surnames of European origin have ended -sky or –ski.  The leader of Ukraine wishes to be known as Zelenskyy, and the press humours him.  Spelling confers legitimacy, and clarifies the sounds that TV registers.  More than that, the political drift of Britain is wholly slanted towards Ukraine.

This is quite startlingly bold and unquestioning.  Boris Johnson is sure that Putin must fail, and must be seen to fail, and that he will ensure the failure.  Liz Truss, his faithful second in foreign policy, is unequivocal in her support.  Just suppose though that Vladimir Putin has no intention of failing and will not do so, what then?  When President Biden said in a hasty moment ‘For God’s sake, this man cannot remain in power’, the able people in the White House immediately said that the President did not mean regime change, which would be intolerable to any Russian leader.  I note that Boris Johnson does not appear to have a comparable team in Downing Street who can qualify the positions taken by the Prime Minster.  He now proposes to kit out the Ukrainian Navy, to forestall a Russian amphibious assault on Odessa. The Cabinet has been told of his wish to provide anti-ship missiles.  This would be a formidable step to arm Ukraine, one certain to bring a fierce Russian reaction.  It is already attracting some grumbles in the EU.  But this is State policy, which is set in stone—until the stone cracks.

At present, the Ukraine resistance seems to be doing well.  The Anglo-Swedish next-generation light anti-tank weapon (NLAW) has scored heavily against Russian tanks, as their burnt-out remains are clearly to be seen.  They weigh half as much as the American Javelins, can easily be carried, and cost £20,000 a piece.  The panzerfaust has come a long way.  But as I’ve argued here, the tank is an archaic weapon, not much use save to cow an impressionable populace.  It will have to be retired in numbers over the many crossing points between Ukraine and Russia.  The Russian troops are in any case pulling out of the Kiev zone and are being re-grouped.  What is left is the Russian bombing and artillery campaign.  That will suffice.  The calculus is easy: Russia can inflict more pain on Ukraine than the reverse.  The ending will be negotiation and partition.  At which point the media glee that Putin is ‘losing’ the war will seem less convincing.

We are already at the inflection point, which can be gauged from the letters pages in the Telegraph.  It is a category error to believe that they are what the mass of people are thinking, even though the words and signatories are genuine.  The Lieutenant-Colonels (retired) exist, out there, and they are strong for Standing Up To Putin.  In reality, they are a daily selection that fronts for the Conservative Establishment, and what it deems fit for the people to read and understand.  A single satiric line (March 30) reveals the shift in posture of our rulers, and it is a first: ‘Britain will fight to the last Ukrainian.’  So we won’t, then.  Boris has gone va banque on Zelensky and has been warned.