For racism, read Islamophobia. Which is a made up word. 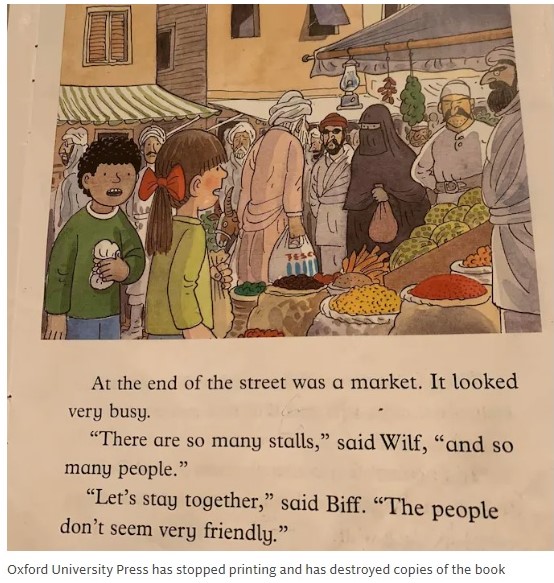 Oxford University Press (OUP) has pulped copies of The Blue Eye, in which the young characters are transported to a foreign land with the help of a magic key.

The children find themselves in a busy street market, which appears to be somewhere in the Middle East, where the men wear white turbans and a woman is dressed in a niqab.

In The Blue Eye, the first men that the children see are aggressively kicking a door down as they chase a woman, who escapes through a window. The woman turns out to be a princess and the children join her, pursued by the thugs as the story becomes an action adventure.

They make it safely to her kingdom, where the people also wear turbans and the women wear hijabs, and where everyone is friendly and welcoming.

While some readers said critics should see the dialogue and plot in the context of “baddies” pursuing the princess, and suggested that the children were simply scared by being in unfamiliar surroundings, others said it was Islamophobic.

“What makes this so bad is that this book is used in school to teach kids to read. So they also get to learn how to be Islamophobic at the same time,” said one Twitter user.

Ash Ahmad, a diversity, equity, inclusion and wellbeing consultant, posted on LinkedIn: “I’m sure, like myself, many of you have read Biff and Chipper books when you were younger and most people loved them, but because we were so young we couldn’t see what was wrong with them. So inappropriate. People were brainwashed from a young age to stay away from Muslims [who were] labelled as scary people.”

The publisher said: “The book was taken out of print completely in March this year following an independent review, and is no longer available to purchase. OUP destroyed its own remaining stock of the book, although a small number of copies may still remain in the supply chain. Some older titles may still be available in libraries, or as second-hand copies.”

The Telegraph comments are good. So good I expect them to be deleted by bedtime.

You get the idea.