The Life of Democracy’s Interpreter 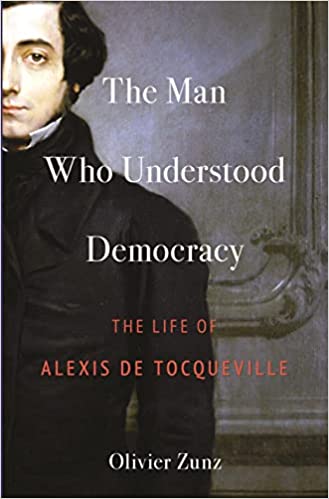 Given his family history and background, Alexis de Tocqueville had every reason to become a reactionary monarchist. Born in 1805, ten of his ancestors were arrested and imprisoned during the revolutionary Terror, five of them guillotined and the rest having escaped that fate only because of the downfall of Robespierre.

Instead, he recognised the inexorable march of democracy in the world and, with reservations, welcomed it. At any rate, he recognised that there was no return to the ancien regime, any more than an omelette can be returned to its eggs. Nevertheless, he also had conservative instincts, not surprisingly for a man of his class, and whenever radicalism threatened disorder, he always sided with the restoration of order, even at the cost of violence.

Olivier Zunz’s The Man Who Understood Democracy is an excellent biography of this major figure of political philosophy. It is well-written and judicious in its use of detail, which is to say in its omission of detail. It is not of inordinate length, resort to excessive length being the besetting sin of so many biographers. It is admiring of its subject without being hagiographic and does not attempt to demonstrate that a man hitherto highly regarded had feet of clay. Tocqueville had his blind spots, and even his moral defects, but which of us does not? Many of us have the blind spots and moral defects without having added to the store of human wisdom, as did Tocqueville.

The author brings out very well the ambivalence, or rather the various ambivalences, that marked Tocqueville’s life, thought and work. What was remarkable about him was not so much the correctness of his conclusions as the intellectual honesty with which he sought them.

Nothing is easier or more common in thinking about political subjects and phenomena than to try to fit them into a procrustean bed of preconceived categories. When faced with something new in the world we are always tempted to fall back on explanations and predictions that have served us well in the past: for, as Ecclesiastes tells us, there is no new thing under the sun. When we look at the rise of China, for  example, we are apt to suppose that its economic success will automatically result in political liberalisation, at least in the end, without specifying when that end might be, thus preserving our view from the perils of possible refutation. Alternatively, we might say that, without political liberalisation, China will lose its economic dynamism—again, in the end. Both these viewpoints preserve us from the discomfiting thought that a form of authoritarianism utterly in contradiction to our political principles might actually be very successful, and lastingly so, according to its own. There is nothing harder to revise than a cherished worldview.

If there is one thing that Tocqueville was not, it was procrustean in his thought. When he went to America as a young man, he let his ideas follow from his observations and not the other way round, as he might well have done. The fact that he had great difficulty in fitting his observations into an overall scheme speaks well of him, for complex social realities are not to be caught in a mesh of one or two principles.

Tocqueville was not a utopian: he did not believe that all political, social, and economic desiderata could be reconciled. Consequently, it would always be necessary to choose among them, the decision having to be taken as to what was better on the whole. He believed that American democracy as he found it might not have been conducive to the production of the greatest masterworks of civilization, but the production of masterworks of civilization was not the aim of government, or even of civilization itself. Here, Tocqueville joined with his great friend and critic, John Stuart Mill, in his utilitarianism. The happiness of the greatest, or greater, number was a more important criterion of judgment of the worth of a government: and in this respect the American republic was undoubtedly superior to, say, the Venetian republic, though no one would deny that in the matter of artistic production, the latter was far the superior of the former.

One cannot but remember the famous line in The Third Man, that while despotism in Florence had produced Michelangelo, five hundred years of democracy in Switzerland had produced the cuckoo clock. Tocqueville was famously alive to the drawbacks of the democratic spirit, for example its tendency to pander to foolish or ungenerous passions, to promote conformity, to bring to the fore ambitious mediocrities, and so forth. Freedom of association for a thousand different purposes, however, such as was found in America to a degree unlike anywhere else, would counteract these tendencies. In America, elitism, in which Tocqueville believed, could be dissociated from social exclusivity, at least in theory. As it turned out, of course, you don’t need titles (Tocqueville always refused to use his) to establish, de facto if not de jure, an aristocracy.

Professor Zunz does not disguise or minimise the greatest blot—from our current perspective—on Tocqueville’s record and reputation, namely his attitude to the French conquest and colonization of Algeria. The history of that conquest and colonization seems set fair to become for France the running sore that the history of slavery has been for the United States; and it is somewhat shocking still to read of Tocqueville’s attitude to it.

Tocqueville was more than merely a patriot: he was a nationalist, who believed that his country should play a major role in the world’s affairs, and this included seizing territory in North Africa. Not to expand in this fashion would be, in his opinion, an acceptance of second-class status and mediocrity of ambition. He hoped that French settlers in Algeria would become like the pioneers of the western expansion of the United States, though less ruthless towards the indigenous inhabitants. In justifying the French invasion, he pointed out that it was hardly the first time in world history that a stronger nation or society had appropriated the land and property of another, which to modern ears sounds a singularly psychopathic argument: a massacre is not justified by previous, even worse massacres.

At first, Tocqueville hoped that the local population and the settlers might be able to live in amity and even forge a common cultural and biological identity, but then he read the Koran and concluded that western and Islamic political ideas were so radically different and opposed that no such integration could ever take place. East was East and West was West, and never the twain would gel. Nevertheless, Tocqueville did not conclude from this that the Algerian adventure might not be such a good idea after all, possibly because of a firm belief in the inherent technical and organizational superiority of western society that would allow the French to dominate forever. Ultimately, the French were not defeated militarily but in the realm of moral philosophy; they ceased to believe what Tocqueville believed. This might have reinforced Tocqueville’s belief in the importance of non-material factors in human affairs.

Tocqueville tried for a time to put political philosophy or science into practice, and even became Foreign Minster for five months. But his experience as an intellectual in politics was not a happy one; and with Napoleon III’s coup d’état, establishing an authoritarian though not totalitarian regime, he retired from public life and concentrated on the last great intellectual project of his life, the explanation of why France could not establish an American-type democracy, but instead veered, or swung, between periods of revolutionary excitement with maximalist demands and conservative authoritarian regimes. To this day, one still hears Frenchmen say that France reforms only by revolution.

To answer his question, Tocqueville delved into French social and economic history, and concluded that the Revolution avant la lettre was taking place long before the outbreak in 1789. But in France, the centripetal forces (including ideology) were never balanced by centrifugal forces, as they were in the United States. Centralization, however, with its concentration of power, always brings its discontents, and then its outbursts of frustrated resistance. Before the pandemic of Covid-19 providentially put an end to the movement of the gilets jaunes, it looked as if France was headed for another period of political turbulence, after a long period of immobilism in which governments superficially of the right and the left pursued more or less identical policies of doing nothing, or nothing much.

It would be fascinating to know what Tocqueville would make of the current conjuncture, both in France and in the United States. In some ways, the two countries have converged, the United States (or so it seems to me) having become more like France in its centralization of power. It seems also to be following France into its militant irreligion, France presenting the curious spectacle of a strong anticlericalism without any clericalism to oppose.

No one will read this excellent biography without pausing to reflect on our current travails. (Mr. Putin would enjoy Tocqueville’s justification of the French occupation of Algeria.) It is a pleasure to read, though I have one or two small quibbles. The author mentions the Marquis de Custine only as a Legitimist. but this is inadequate and unfair. Custine had several things in common with Tocqueville: both his grandfather and his father were guillotined and his mother escaped the same fate only because of the downfall of Robespierre. Custine went east, to Russia, rather than west to America, and was in search of evidence in favour of royal despotism. He returned a democrat, and his great book, La Russie en 1839, was of as much relevance in understanding the world behind the Iron Curtain as Tocqueville’s book, Democracy in America, has been in illuminating the American experience.

I was startled to read Charles von Bunsen described (twice) as the German ambassador to the Court of St James’s, because there was no such political entity at the time as Germany. Bunsen was the Prussian ambassador, not the German, by no means the same thing at the time. I happen to be interested in this for an arcane reason: I once worked in the German Hospital in London, among whose patrons and donors were Baron von Bunsen and Tsar Nicholas I.

But these, as I have said, are quibbles. I read this biography with undiluted pleasure and instruction, as will all who would learn from the great thinker how better to make our way in the democratic world.

PrevHow Do You Know What You Know?
Cancelled: Biff, Chip and Kipper book pulped by Oxford publishers in racism rowNext