He had a song that he sung, he could make the rain go, anytime he moved his finger. 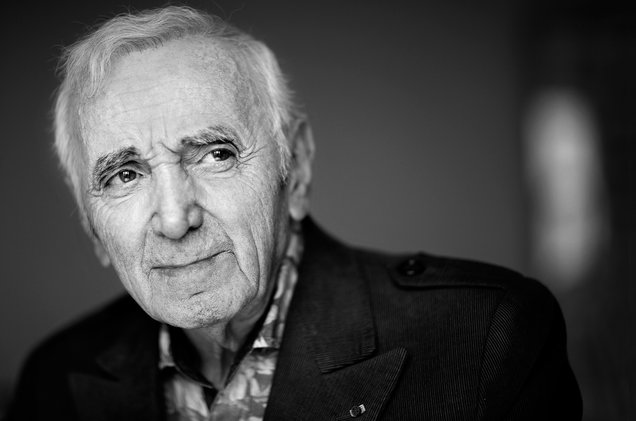 On October 5, 2018 a ceremony, a state funeral of the 94 year old Charles Aznavour, the singer-composer who had died four days earlier, soon after returning from a concert tour in Japan, took place at Les Invalides, Paris. The ceremony was attended by three French Presidents, the prime minister of Armenia, and a number of familiar personalities in music and films, such as the 85 year old Jean Paul Belmondo, Mireille Mathieu, and Enrico Mathias. It symbolically illustrated the fact that a son of Armenian immigrants had become a symbol of French culture.

The coffin was carried into the courtyard of Les Invalides to the sound of music played by a traditional Armenian flute and the anthems of two countries. The coffin was carried out to the strain of one of Aznavour’s well known songs,  Emmenez -moi, 1967 song, take me all over the world. The symbolism continued. The Eiffel Tower was lit in his honor, while a candlelight vigil was held in Yerevan, the Armenian capital.

By coincidence this event marked the second time within a year that France had lost and honored a showbiz celebrity, since in December 2017 it mourned the death of Johnny Hallyday. France has had a long line of popular singer songwriters, often poetic, such as Jacques Brel, Charles Trenet, Edith Piaf, Jean Sablon, Serge Gainsbourg, Leo Ferre (French born Monegasque). Important though these and others have been in French cultural life , Aznavour had the longest career, from post World War II to 2018 and was the most influential. He performed over 1,400 songs, of which he composed 1,300, and acted in 60 movies, including the leading role as the musician in Francois Truffaut’s 1960 film, Shoot the Piano Player. Aznavour wanted, he said rather teasingly, to be considered an actor who sings, more than a singer who acts.

Central is the reality that Aznavour best represented the French chanson tradition, story telling, vivid lyrics that drive it,  direct expressions of emotion, lines ending in feminine rhymes, words that are monosyllabic spoken in prolonged fashion as if bisyllabic. Aznavour was often dubbed the “French Sinatra,” and indeed they had things in common. Both in a sense exemplified a bon mot atttributed to Sinatra, “every song is a one act play with one character.” Like Sinatra, he sold millions of records; in his case 180 million. Like Sinatra, he career lasted several decades, and they succeeded both in musical performances and in films. Both received accolades at home and abroad. They did appear together once, in a 1993 duet, “You make me feel so young.”

But Aznavour, unlike Sinatra, wrote almost all his songs, singing in a number of lanuages, with themes of tolerance, frankness, despair, regret, breaking taboos on subjects, like marriage, homosexuality, feminism, inner emotions. Both singers may have displayed empathy in their songs, yet those of Azanour may be more touching. In 1972 he composed Comme ils disent, (What make a Man), a sympathetic story of the life of a gay man: “nobody has the right to be the judge of what is right for me.”

Aznavour was honored nationally and internationally, by being made Commander of the French Legion of Honor, and on August 24, 2017 by a star on the Hollywood Walk of Fame. He was loyal to both of his countries. In 1988 he wrote a song Pour toi Armenie, and he founded Aznavour for Armenia, a charitable non profit organzation after the earthquake that hit Soviet Armenia that year. He took part in a film Ararat 2002 about the massacre of 1.5 million Armenians by the Ottomans which he campaigned to get described as a genocide. Armenia made him a national hero in 2004, and later ambassador to UNESCO, and Armenian ambassador to Switzerland in 2009. Aznavour can be seen as the most famous Armenian of his time.

Aznanour stremmed from two cultures, he was a French composer and an Armenian lyricist. At the funeral ceremony President Emmanuel Macron praised the singer, who was profoundly French, “attached viscerally to his Armenian roots and carried the scar of the genocide of his people in his heart.” His lyrics appealed to “our secret fragility,” and were for millions a balm, a remedy, a comfort. Macron compared Aznavour to the poet Guillaume Apollinaire, adding that in France poets never die. The President praised Aznavour, as one of the most important faces of France, who had made our life sweeter, or tears less bitter with the tone of his voice and unique radiance.

The remarkable life of Aznavour allows a significant commentary of 20th century French society. He was born in Paris, the child of Armenians who fled the massacre, now viewed as genocide by the Ottoman empire and came to France, where they ran a restaurant for time. Aznavour was given his name “Charles” by a nurse who could not pronounce his original name, “Shahnourh.” He left school at an early age, but he was already affected by Maurice Chevalier’s song, Donnez moi la main mam’zelle, and decided to become a singer.

His success seemed unlikely. Aznavour was short, 5 foot ,3 inches, skinny, uneducated, not the man some girls think of as handsome, with a cavernous voice that he said had an oriental quality. Jean Cocteau remarked of him that he sang more from his heart, than from his vocal chords. He was fortunate at the age of 21 to be befriended by Edith Piaf , the little sister from the Paris streets, who was his patron for eight years, though never his lover, sang some of his songs, and took him on a tour of the U.S.

Aznavour was a great troubadour who was apprecisted by and influenced fellow musicians invluding Bo Dylan and Liza Minnelli. Besides being the champion of chanson he was also a honorable and indeed righteous citizen. His parents helped the resistance during World War II, and hid Jews and communists in their home. 0n October 26, 2017, he, on behalf of his family, was given award in Jerusalem, the Raoul Wallenberg award for sheltering Jews in France during the War. The donor was the Raoul Wallenberg Foundation which is based in New York, but Aznavour chose to receive the award from Israeli President Reuven Rivlin in Israel where he then performed a concert. He also spoke of the things in common btween Jews eand Armenians: misfortune, happiness, love of music and the arts, becoming important in countries where they have been received.

His music lives on. For Americans perhaps the best memory of him and his life is in the final sequence of the film Notting Hill where his song “She” is sung in a version by Elvis Costello. The lyric of the song is that the “meaning of my life is she, she, she,” but the real meaning of his life is more important, the story of a man who loved his Armenian background but who became a French icon.