From the Essex Gazette, the Telegraph and the BBC.  Photograph from the Daily Mail

A teacher has been suspended from a top state grammar school after allegedly using a mug with a cartoon of the Prophet Muhammad on it. 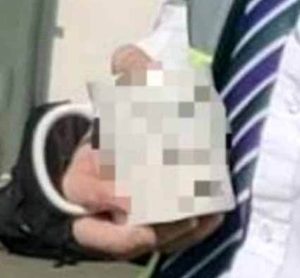 The staff member at Colchester Royal Grammar School in Essex is said to have been photographed with the item, which had a picture from a cartoon series called ‘Jesus And Mo’ on it. In speech bubbles, the Jesus figure appears to say ‘Hey’, with the Prophet Muhammad figure responding: ‘How ya doin?’  It is believed the drawing is the work of a British author using the pseudonym Mohammed Jones, who created the satirical Jesus and Mo series.

In an image seen by the Gazette, a Colchester Royal Grammar School teacher can be seen holding a coffee mug depicting Jesus Christ and the Prophet Muhammad in its Lexden Road grounds.

The teacher at Colchester Royal Grammar School (CRGS) in Essex is thought to have taken the mug into the playground.

A school spokesman says it is investigating the incident and robust action will be taken if necessary. They have been suspended from their role, according to a PA Media source.

It is the latest scandal to hit the grammar school which has some of the top educational results in the country.

Scarlett Mansfield, who attended the school’s sixth form in 2011, launched a blog which has seen hundreds of testimonies from current and former pupils alleging abuse.

The former student said yesterday she “wasn’t surprised” when she was made aware of the latest incident at the school. She said: “The fact they had the audacity to bring it so blatantly into school, and, from what I hear of it, showing it off to students, shows he’s not even trying too hide his completely unacceptable views. . . A pupil who reached out to me said they were horrified about it.”

She said that topics such as domestic abuse and homophobia were treated as a joke at the predominantly male school – which only accepts girls in Sixth Form.

A joke she considers to be in poor taste (although Jesus and Mo can be very funny at times) is the least of our problems at the moment I would have thought.  But virtue signalling is imperative for the upwardly mobile SJW and much easier than supporting the Rotherham (and elsewhere girls) or defending women’s safe spaces.