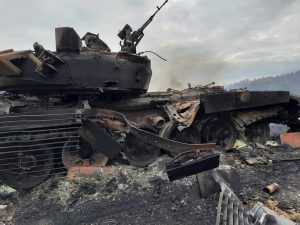 The media coverage of the Russo-Ukrainian war is astoundingly maladroit. Fallacy after fallacy is presented as if each is a pearl of enlightenment. The media folk merely encourage one another, cliché calling to cliché in a yodelling exchange. I’ll begin with their word for the current situation.

Stall.  Nobody seems to know of von Moltke’s line, ‘No plan of operations reaches with any certainty beyond the first encounter with the enemy.’  After that, the new evolving situation has to be addressed. Vladimir Putin evidently began the war with a dud plan which is now replaced by a plan which however brutal promises a victory of sorts.  It is based on the historic power of Russian artillery, celebrated in Eisenstein’s film Ivan The Terrible (1945) in which the cry ‘Na Kazan!’ sets off the Tsar’s forces.  The Russian guns are dragged up with painful labour, to Prokoviev’s score, until they reach the walls of Kazan which are then destroyed.  Stall is inadequate for the re-grouping now taking place.

War Crimes Tribunal.  This one is popular with the press and the top people who would be on it.  The Telegraph (28 March) reports that the British judge, Sir Howard Morrison, who jailed Serbian leader Radovan Karadzic for war crimes is to advise Ukraine and the Government on bringing Vladimir Putin and his lieutenants to justice.  It looks like a nice little earner for the legals, as we say in our coarse way.  It has not the remotest chance of moving off the drawing board into justice. A shrinking Putin will not be escorted to the Hague, there to await judgment for his crimes. Since he will be resident in Moscow, he will not leave it, any more than his top people. As for the lesser criminals—common soldiers—the Russians have a hoard of captured Ukrainians who can be exchanged or brought to trial in a Russian court.  This one is really not worth going into.

Besides, the issue is not one for stirring. All war is war crime. Clean hands do not exist. Max Hastings, in his history of the Normandy landings, cites orders given to Canadian officers: ‘N.P.T.’  That stood for ‘No Prisoners Taken’, and there is good evidence that the order was obeyed.  The appointment of a legal adviser is mere gesture politics.

‘Morale’ is simply a way of talking about group feelings.  The media love it, as in the claim that unions are in ‘low morale’ unless they get a pay rise.  It does not grip the reality of events.  So far as the Russian army is concerned, Russian generals have never given a damn for the lives of the troops in their command.  The commissars shot any number of their troops in WW2, and I make no doubt that their current replacements are equally ready. On TV I have just seen a number of high-ranking officers seated at a meeting addressed by Putin, and a hang-dog lot they looked.  They must be contemplating an early retirement, or a posting to the front where their retirement will be even earlier.  I think that we can take for granted the military response to morale problems. As for the civilian population, they will tend to accept the official narrative. As we do, of course.

Really! What on earth do we know of Russian strategy? Nothing, save what has been whispered by unimpeachable and unknowable sources to their media outlets. Has no one ever heard of maskirovka, the Russian deception technique at which they are adept? Nothing is known of Putin’s strategy, other than the evident and sound intention to consolidate his control of the Eastern provinces and extend the southern rim as far as Odessa.

Tanks.  The cult of tanks continues to be fostered by the media, in spite of the TV display of the largest traffic jam in military history.  Patton, you will recall, had a brisk way with traffic holdups. No such leader has yet emerged in Ukraine. And yet there were warnings enough from history to today.  In Berlin April 1945 a kid in the Hitler Jugend took out a Soviet T-34 with a hand-held panzerfaust, a weapon both cheap and effective. For that feat he was decorated by Hitler, in his last such investiture. A couple of weeks ago a young Ukrainian soldier destroyed a Russian tank with an advanced anti-tank device of British design. For that he was acclaimed in the press, proof of high-grade, expensive British technology.  Think of it: 77 years after Berlin, we are still seeing a state-of-the-art weapon held by a novice destroying a tank. A tank is still a target, and the art of war has not advanced, though it has in other departments.

The explanation lies in the procurement culture. Military and industrial interests have approved the creation of more and better tanks, and by the same token more and better anti-tank weaponry. Each supports the other. With the result that innumerable columns of Russian tanks have been stuck in a long field. Guderian’s panzers gloried in free movement; when in France, they ran into the usual logistics problem of petrol shortage, they simply stopped off at gas station and filled up. Their equivalents today have shed their heritage.  Something has gone badly wrong.  I rather think that yesterday’s big investment in tanks will taper off.