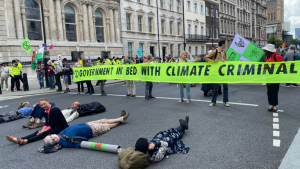 Extinction Rebellion is a movement of climate-change activists in Britain that indulges in direct action such as blocking roads and stopping trains, often to the intense irritation of the rest of the population who may be deeply inconvenienced by it. The members of Extinction Rebellion, mainly educated and middle-class, are so convinced that mankind’s very survival is imminently threatened by anthropogenic climate change that nonviolent illegal action, supposedly to prevent it, is justified.

The movement decided to open a chapter in my small town in England, and I went to its inaugural meeting in a pub. Apart from the coordinator and a few bearded young men of timid demeanor, the eight other attendees were middle-aged or older – rather unusual for a movement of activists or would-be activists.

I was surprised by how much I liked them. They were obviously good, kind people, and intelligent also. They were avowedly left-wing, but I do not look forward to the day when I must dislike people only because their opinions differ from mine.

The coordinator was a woman in her thirties who proudly announced that she had just come from a direct action—in this case, pouring a black substance that looked like oil (but wasn’t) over the local headquarters of a large bank, the largest British lender to the oil and gas industries. She didn’t say whether she had been arrested while doing it, but members of Extinction Rebellion do not try to escape the law. They accept and perhaps even welcome prosecution, though some have been acquitted because they have been regarded as acting in a good cause.

Some of what the attendees proposed at the meeting was eminently sensible. Improved public transport seemed to me, as well as to them, of vital importance in a country as small as Britain. It would certainly improve the quality of life greatly. It was when they moved on to “changing the system” that I began to feel that I was back at university, circa 1970.

They demanded an end to carbon emissions by 2025 and the abandonment of the use of all fossil fuels by that date. By then, all electricity was to be generated by so-called renewables. What, perhaps, was surprising was that no one stopped to consider, even for a moment, the consequences this would entail: power cuts, unheated homes, cold showers, an end to vehicular transport and distribution, an end to industrial production, and so forth. For them, climate change was infinitely more real, or at any rate more important, than any such effects. They glowed with almost religious fervor.

Nor did they stop to think that nothing that Britain could do would make the slightest difference, even if it never emitted another single molecule of carbon dioxide in excess of consumption, and even if the theory of climate change were entirely correct. Perhaps they should try pouring non-oil oil-like substances over Chinese bank headquarters, for example?

Nor, surprisingly, had the current world situation obtruded on their consciousness. But then, if it had, they would, no doubt, have said that it only confirmed their view that we must henceforth rely on renewables. Altogether, they gave the expression “tilting at windmills” fresh meaning.

I left early, knowing that their nonsense is dangerous but strangely enough, feeling some affection for them. They wanted, as perhaps we all do—though most of us understand it is not possible—a world in which no trade-offs are necessary for the things that they desire.