Biden Must Use the Right Language 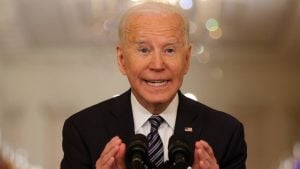 Whenever I use a word, it means just what I choose it to mean, neither more nor less. Time wounds all heels.

Everyone sometimes makes mistakes in speaking, slips of the tongue that may be inconsequential or may reveal thoughts and motives that lie behind the surface. Of course, sometimes a banana is just a banana. However, Sigmund Freud informed us in his discussion of psychopathology of everyday life that he discovered almost invariably something was apparent out of the intended speech of a patient. The disturbing element was a single unconscious thought which came to light through special blunders, mistakes, fehlleistungen.

A saying usually if incorrectly attributed to the cynical French diplomat, working for Napoleon, Charles Talleyrand, 1754-1838, regarding the execution of a Duke, is that the action was worse than a crime, it was a mistake.  Was the event done inadvertently or by conscious wrongdoing? Talleyrand himself epitomizes a current concern: cynical opportunism on behalf of a country, or genuine concern for peace in the Continent.

Malaprops, use of a word in place of a similar sounding one, are first found in R.B. Sheridan’s The Rivals. His character Mrs. Malaprop declaims “she’s as headstrong as an allegory on the banks of the Nile.” Some of the many similar mistakes can be mentioned. Shakespeare’s Constable Dogberry, “our watch have indeed comprehended two auspicious persons;” Yogi Berra who declared that “Texas has a lot of electrical voters” and who assured us that even Napoleon had his Watergate; and Richard Dailey, political boss of Chicago, who boasted that “O’Hare airport was the crosswords of the nation.”

Commonly, politicians of all parties make gaffes, revealing truths that they did not intend to admit or weren’t supposed to say. Ronald Reagan in a microphone test before a radio address in 1984 uttered, ”My fellow Americans, I am pleased to tell you I just signed legislation which outlaws Russia forever. The bombing begins in five minutes.” Or vice-president Dan Quayle, talking of George H.W. Bush, “The President is going to lead us out of this recovery.” Or Richard Daley again, “The police are not here to create disorder, they’re here to preserve disorder.”

Gaffes may embody ill-advised humor or deliberate distortion.  Joe Biden in 2008 praised Barack Obama as “The first mainstream African-American who is articulate, and bright and clean and a nice looking guy.” Some gaffes stem from egoism or exaggeration of  ability. Al Gore in 1999, “During my service in the U.S. Congress I took the initiative in creating the Internet.” In Britain Tony Blair, then prime minister, deliberately exaggerated the threat posed by Saddam Hussein, presenting judgments that were not justified, in committing British troops  to the U.S. led invasion of Iraq in 2003.

The present dilemma over the use of language now stems from the recent utterances of the leader of the world’s superpower. It is recognized in Washington, D.C., and elsewhere, that President Joe Biden has a tendency on occasions to misstate his ideas and policies. Officials in the White House have had to clarify his injudicious statements on a number of issues: on U.S.  troops based in Poland going into Ukraine; the suggestion that a “minor incursion” by Russia into Ukrainian territory might be acceptable, a suggestion refuted by President Zelensky, there are no minor incursions; the nature of U.S. responses “in kind” to the use of chemical weapons by Russia; uncertain relations with NATO; and now on regime change in Moscow.

The present focus is on Biden’s remarks during his trip to Eastern Europe in March 2022. In Warsaw on March 26, 2022, Biden delivered a stark speech, speaking of the battle between liberty and repression, between a rule-based order an one governed by brute force.  Alas, it now may be considered a gaffe.  The speech was intended to emphasize the policy of the U.S. in alliance with Europe to support Ukraine against Russian invasion. But in it he departed at the end of his address from the official script in adlibbing the nine words, “for God’s sake, this man (Putin) cannot remain in power.”

The query now is whether Biden’s off the cuff remark was sending a message to Putin and to the international community or was this one of what Freud called  fehlleiostingen. Was the ad-lib unhelpful to peace talk, and would it escalate problems?  The question is whether   Biden’s words are a gaffe, or does he utter things he does not really mean. Some commentators suggest the remarks were a gift to Russian propaganda and paranoia about  U.S. coups. In general, some ambiguity is essential in international affairs, but there is a basic need for clarity.

It is essential to understand whether Biden misspoke or was expressing his true feelings. Was his remark aimed at change of regime, and therefore akin to the Kremlin’s own argument that the West is anxious to destroy Russia.?  Officials in the White House attempted to  “correct” the remark. Secretary of State, Anthony Blinken said that Biden was not advocating regime change but meant that Putin cannot be allowed to exercise power over his neighbors or the region. Blinken said regime change was up to the Russian people.

Biden on March 28, 2022, did not apologize for calling for Putin’s removal, but defended his remark which he “was not walking back.” He was expressing his outrage. Putin should not remain in power, just as bad people should not continue to do bad things But there is no fundamental policy to do anything to take Putin down. He refuted the idea that his rhetoric could cause Putin to escalate his aggression  against Ukraine.  Indeed, it is Putin’s extraordinary behavior that has removed any doubt of this, and has strengthened the Transatlantic alliance. But will Biden be the leader of that alliance?