From the Manchester Evening News

Didsbury Mosque has responded to criticism it faced at the Manchester Arena bombing public inquiry, claiming ‘misleading statements’ were ‘still an attempt to associate’ it with extremism and radicalisation. In a lengthy statement published on its website, the mosque said it was ‘disingenuous’ to give an impression it has not condemned the atrocity – and ‘bizarre’ that the Charity Commission ‘should be asked to revoke our charitable status on that basis’. 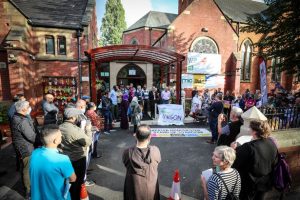 Referencing an arson attack last year the mosque said ‘smearing and demonisation by some’ at the inquiry has put it ‘at risk from extremist elements’ – and said it had alerted Greater Manchester Police to subsequent online threats.

Left – the vigil held at the mosque after the arson attack, in which a door was scorched and damaged.

Elders said in the statement that ‘at no point’ had police, counter-terror policing or MI5 ‘contacted us with concerns’ about the Abedi family.

To recap, Salman Abedi the suicide bomber and his and his jailed brother, Hashem Abedi worshipped there, their oldest brother Ismail Abedi,  volunteered in the mosque’s Arabic school, their father, Ramadan Abedi, performed the call to prayer and their mother taught there briefly. So not a family who slipped in anonymously for prayer and quietly out again. Over the years while they were living locally they were part of the fabric.

The mosque, in its statement, criticised comments made by both Mr Cooper and Assistant Chief Constable Dominic Scally, of Counter-Terror Policing North West. “Whilst it is stated that Didsbury Mosque did not support violence or have anything to do with the attacks, their subsequent comments still attempt to associate Didsbury Mosque with extremism and radicalisation,” read the statement.

“We believe this is a diversion from focusing on the very real failings of those agencies with a duty to protect the public and prevent such attacks.” . . . the mosque said it ‘has been continuously demonised to make the case for Government measures that will securitize places of worship’. It said it would be ‘seeking reassurances that the inquiry will remain independent of the Government in making recommendations as far as Didsbury Mosque (mosques) and Muslim charities are concerned’.

“Didsbury Mosque cannot be held responsible for the fallout of a decision of the British Government, working with some Libyan groups to remove the Gaddafi government, which encouraged some Manchester Libyans to go and fight in Libya, creating a radicalising environment and extremism among some in Manchester.

“Given that environment, the Didsbury Mosque believes we successfully kept Libyan politics out of the mosque. Mosques are places of worship and should not become places where intelligence gathering on people’s lives and politics should take place.”

The mosque said MI5 and MI6 ‘have not provided a full account of any relationship they may have had with Ramadan Abedi’ – the father of the murderers. “We will ask the Inquiry to investigate this further and consider if that in any way could have contributed to the failure to adequately monitor Salman and Hashim Abedi,” elders added in the statement.

“It is disingenuous to try to give the impression Didsbury Mosque has not condemned the Manchester Arena attack, and bizarre that the Charity Commission should be asked to revoke our charitable status on that basis. We made it clear that this barbaric act had nothing to do with Didsbury Mosque, Islam or the Quran, immediately after the attack. This was in front of the world’s media which had a greater reach than the few people who visit our website. . . ”

The inquiry heard counter terror police tried to engage with mosques in south Manchester in 2016 to get imams to discourage young men from travelling to Syria to fight. But Dominic Scally, head of Counter Terrorism Policing North West, said Didsbury Mosque was ‘less positive’ than others. The mosque asked him in the statement to provide evidence of that ‘not simply make assertions’.