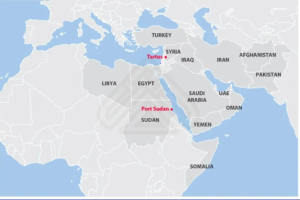 Sudan coup leader General Mohamed Hamdan Dogolo (Hemeti) flew to Moscow at the start of Putin’s invasion of Ukraine in late February 2022 to conclude a joint agreement fulfilling Russia’s dreams of constructing a naval base on the Red Sea which is about to become a reality. The last ship of a combined air-sea bridge left from two Russian bases of Tartus, and Hmeimeem in Syria docked in Port Sudan about a year ago to complete the construction of the Flamingos Naval Military Base (FNMB) with nuclear capabilities. This event occurred with complete silence from the Sudanese authorities. The Flamingo base is an important strategic location, overlooking the northern end of the coastal city of Port Sudan. The Khartoum regime granted rights to Russia to establish a naval military base covering an area of 50 square kilometers. This base can accommodate 4 large ships, each of which is not less than 200 meters, as well as 24 anchorages for larger vessels and cruisers. According to Ashraf Abdel Bagi’s statement to Al Hadath, the base will contain radars, tanks for security protection, landmines section, an electronic warfare system, and air defense systems. The site chosen by Russia is located in a base with old buildings that will be modernized. Additionally, new buildings, including an intelligence center will be constructed the base is currently hosting 80 Russian soldiers and technicians, divided into three groups: air defense, wharf and base security, the latter protected by tanks and land mines.

According to the Russian Sudan agreement, the base will ultimately accommodate approximately 300 soldiers, but the assigned contingent could be greater than that. The base is also designed to accommodate ships equipped with nuclear capabilities while considering nuclear safety and physical environmental protection.

Furthermore, the base serves as an alternative to the Syrian Tartus naval base in the event of possible air and sea threats. In addition, this naval base provides a platform for launching coastal missiles towards military targets in the Red Sea horn of Africa area. Moreover, under the signed Russia Sudan agreement the Red Sea base would provide maintenance, relief, and rescue of Russian vessels in regional and international waters falling under threat. It would also serve as a center for distribution and shipment of Russian weapons and equipment to support Russian interests in Africa. Abdel Bagi mentioned that the joint agreement constitutes a dangerous threat to Sudan because it allows Russia to operate outside the jurisdiction of the Sudanese judiciary. Meaning that the Sudanese authorities do not have the right to monitor and object to any operations that will be conducted by Russians.

The agreement has a term of 25 years, subject to renewal, and a guarantee by Sudan not to enter into any agreements for use of the base with other countries during the life of the agreement.

Upon his return from Moscow in a press brief, Hemeti responded that he has no objections if Russia or any other country interested to establish a base in Sudan’s long Red Sea coast. His statement made many to suspect and raise questions on what Janjaweed leader has in mind and what he concluded with Russians on his visit to Moscow. Since his return from Moscow, he visited Port Sudan and Manalgil with an objective to foster alliance and establish popular support. Additionally, a large number of Sudanese activists suspect him of engaging in corrupt practices, i.e., bribery and other illegal financial inducements with Arab tribal sheiks.

The Sudan News also reported that the Sudan People’s Liberation Movement-North faction commanded by Abdelaziz al Hilu, and the Sudan Liberation Army led by Abdel Wahid Mohamed Nor accused Hemeti of visiting Moscow to obtain weapons to RSF/Janjaweed militias that he commands to attack their liberated areas. ASSAHIFA news agency also reported that Hemeti’s statement angered Egyptian authorities who see Russia establishing a naval base in Port Sudan near their borders as a threat to their national security. 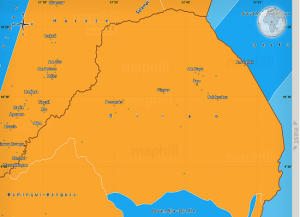 On March 14, 2022, Russian Wagner Group forces in the Central African Republic (CAR) attacked mine workers in Andaha, Braio, killing 16 people. They confiscated gold, motor-cycles, looted and burned the Andaha Market. The Wagner mercenaries were reported beating, shooting, and killing workers. The survivors described the situation as one of the worst atrocities they have ever seen. According to Adam Zakaria, one of the mine survivors interviewed by the Darfur 24 News said the soldiers established roadblocks with tanks on main highways and used motor-cycles to run down and shoot escaping victims. In Al-Mamoun they killed 3 people. One of those victims shot and the other two were mercilessly slaughtered. Another survivor identified as Al Nazir Hussein Abderhaman said that when they captured a person they searched him thoroughly looking for gold. If they found gold they seized it. The survivor also stated that if they capture a bearded man or a person who wears a turban, they shoot them. Arriving at the Sudan border in Amdafok, the survivors were treated harshly by the police because the Sudanese authorities who appear to be collaborated with the Russian Wagner Group mercenaries. After the mercenaries dispersed the mine workers, they seized gold grinding mills in Andaha, and established training bases for Chadian Janjaweed rebels in the Central African Republic (CAR). The Russian Wagner Group mercenaries arrived in Amdafok with 15 trucks and 6 Armored Personnel Carriers and tanks. They are moving toward the town of Sam to clear off workers from mines and occupy them. According to the survivors, the Russian mercenaries

[i] Lt. General (ret.) Abakar M. Abdallah is a native of Darfur and was a US trained Senior Intelligence officer in the Republic of Chad Army and commander of a multi-nation Pan-Sahel Counterterrorism Unit. He is currently Chairman of Sudan United Movement.

Jerry Gordon is a Senior editor at The New English Review.