Jeremy Corbyn, leader of the Labour party, friend of the IRA, Hamas, Maduro and Chavez of Venezuala, a man who never met a terrorist he didn’t like, is with his former lover, the shadow Home Secretary Diane Abbott, leaving the Finsbury Park mosque in his constituency. 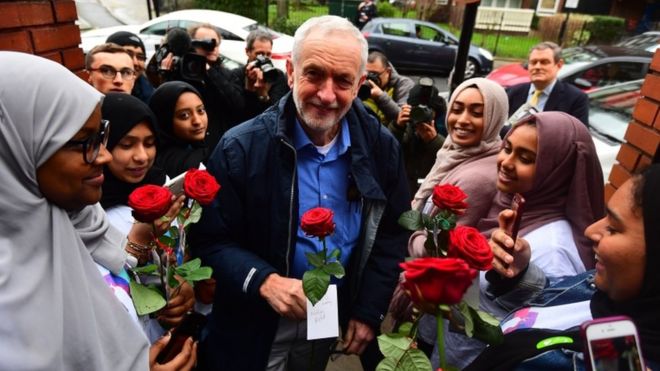 John Murphy, a north London man, enraged by Corbyn’s failure to properly support the result of the referendum to leave the EU expresses his dismay by shouting  “When you vote, you get what you vote for,” at which he breaks an egg over Corbyn’s head. Murphy was arrested, appeared at Westminster Magistrates Court last month and was sentenced to 28 days imprisonment.

Sentencing him … Chief magistrate Emma Arbuthnot told Murphy … a custodial sentence would send a clear message : “An attack like this is an attack on our democratic process.”

Picture another scene. Pro-brexit James Goddard a yellow vest organisor saw prominent and vigorous Brexit thwarting MP Anna Soubry walking around Westminster and told her, again, that in his opinion, she is a Nazi and a traitor.  He has been charged with harassment, he has pleaded not guilty and his trial will be in July.

It’s the north west of England. Manchester, Warrington, Wythenshawe, that bit of old Cheshire and Lancashire that constitutes the North West England European Parliament constituency The area where Tommy Robinson aka Tommy-Robinson-whose-real-name-is-Stephen-Yaxley-Lennon is standing for election later this month. Obviously he is going around and about, campaigning, meeting supporters, engaging with constituents.

Bury – Wednesday 1st May. As reported by The Telegraph

Steven Yaxley-Lennon, also known as Tommy Robinson, was out canvassing in Bury, Greater Manchester when an unidentified person threw a milkshake bottle at him.

Watch the video above to see how the incident occurred.

Warrington – Thursday 2nd May. The milkshake in Bury is said to be a strawberry one. In Warrington all we know about the drink so far was that is was one of the Macdonald range of milk drinks. The Manchester Evening News  and the Lancashire Post report so.

A man who covered Tommy Robinson with a milkshake claims the drink ‘slipped’ out of his hand.

The far right extremist was campaigning in Warrington, Cheshire, when the McDonald’s drink ended up over his head

Danyal Mahmud, 23, from Blackburn, says that in the moments before the incident in Warrington town centre – which was caught on camera – he was approached by Robinson as he made his way home.

“I didn’t want to talk to him, I didn’t want anything to do with him”, he said. “He saw I was the only Asian man there. He kept coming up to me and asking ‘am I a racist? Do you think I’m a racist?’ “I was minding my own business and he kept on approaching me. . . I just got annoyed with him. A milkshake ‘slipped’ out of my hand. . .”

In the footage of the incident, Danyal can been seen talking to Tommy Robinson. . . Danyal continues to shake his head before throwing a drink at Robinson. Violence then erupts and the English Defence League founder throws at least three punches. Police broke up the altercation, and it is understood that Robinson made an allegation of assault against Mahmud. 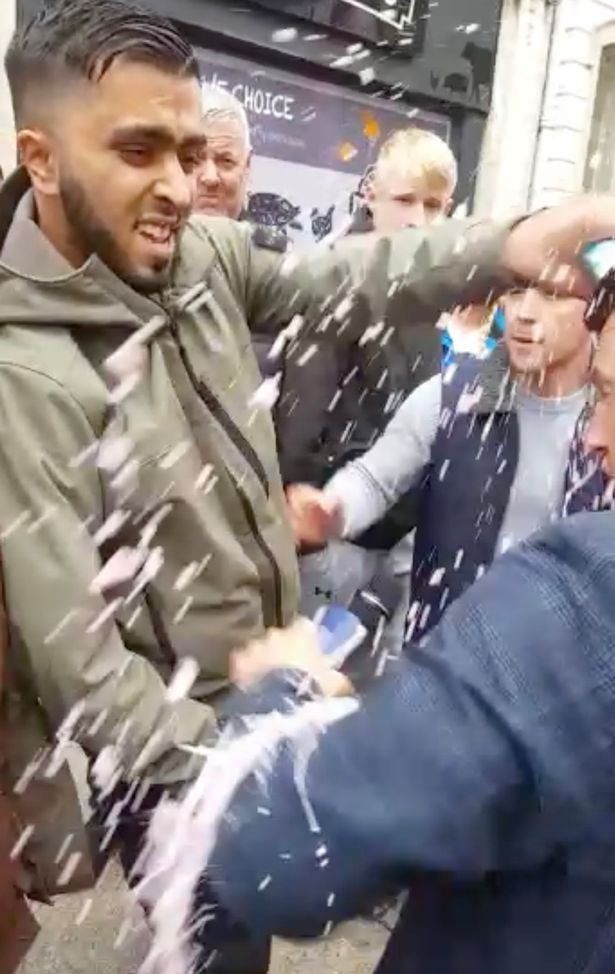 The old saying don’t dish it out if you can’t take it back, springs to mind.

Journalist Assed Baig of Channel 4 and his twitter followers seem quite pleased. As I don’t speak his language I cannot be certain that the event which has so delighted Danyal Mahmud here is the accuracy of his milk throwing but he is certainly pleased about something. And the tweets below approve the deed. As do tweets by Billy Bragg (ex of Barking) and others

Then Tommy met these potential voters – delightful young men. I can’t work out how to embed this video clip from my source yet. As and when I do I’ll update this post. But you can see the subtitles and the gesture. They don’t like ‘white men’ but they have adopted our two finger salute which goes back to the days of the English and Welsh archers of the Middle Ages. 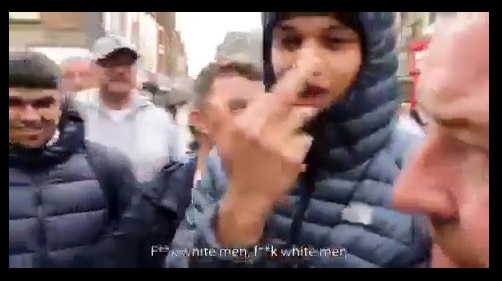 While I have been preparing this Tommy has just released a video of what he has seen and heard these last few days while campaining. I’ll watch it now and may well link it later.

But the dangers and lack of protection for the democratic process is a stark contrast.

This is that video prepared by the campaign team about the reception their candidate has received so far. The violent assaults, not just to TR but bystanders hoping to meet him, the aggressiveness of Danyal Mahmud towards the team on several occasions prior to the ‘slippage’ of the milkshake. Other assaults,  all ignored by the police. And finally the genuinely welcome reception he received from the traditional inhabitants of these northern towns